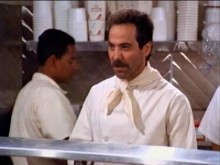 You may be saying, “nothing has the capacity to shock anymore.  I’ve seen a candidate lead off a 30-second spot by declaring that she is not a witch.  A candidate who suggested that chickens could be traded for basic medical care almost won an election.  A guy who has been out of political office for a decade and who divorced a cancer-ridden wife is seriously angling for the Oval Office on a family-values platform.  There is no more to see.”

Not so fast.  Now, Campbell’s Soup, we are told, wants to destroy everything we know and love.  Seriously.  Campbell’s Fucking Soup.

Earlier this year, Campbell Canada introduced a line of halal-certified soups. The 15 soups comply with Islamic dietary regulations which, much like kosher regulations, prohibit certain foods and define the right way to slaughter animals.  The line, which includes low fat cream of broccoli and vegetarian vegetable, was certified by the Islamic Society of North America, which has been certifying halal foods since 1988.  To some people, that’s just more evidence that Sharia is coming to North America — this time, via the grocery store.

Of course, this is Canada we are talking about here.  Not U.S. America, but Canada.  But, as you shall see post-jump, that means nothing to anyone who loves freedom.

The crazy is deep in these ones.  But to get to the real gold, go into the comment boxes.  Like this bright one from Pam Geller’s rantboard:

As a small act of defiance, I always throw a pack of bacon into the “Halal Section” at the grocery store. I’m not the only one, as I often see hams or tenderloins in there. Childish… yes…. but… Everyone should do this!!!! Hopefully the site of a nice pack of Schneiders maple bacon will deter the muslims from buying anything and the food will spoil, thus hurting profits at the store and at the national level.

And another one of Pam’s drones brings up the quandry of what to do if Campbell’s is sold by your local… PX?

I am wondering if our local Naval Commissary will be stocking these brands of their soup? What excuse will the Navy give if they do? We are required to supply food and comfort to the enemy? Then will I not shop there anymore. How about the local Save Mart are they going to stock these brands? And who will protest when this happens to either one of these stores?  The Navy Exchange already stocks tools made by china, so far not problem in them being sold. Star War toys are now made in china, still being bought by many people.  Why oh why do we deal with trading with countries that are our mortal enemies? and voting is NOT going to change this problem.

Oh, and if you were thinking about taking the fight to these guys, on their turf, don’t bother.  They saw you coming and figured you out before you said a word:

Do you realize how late in the game you are coming into this dialogue? We are past dealing with the likes of you and your mindset. We are done discussing your strange view points. We are way past the time to be schooled by PC people when the majority of us are at our last straw.

Where have you been? Asleep while the discussions and arguements have been going on all around you? Do us all a favor, go back to sleep and set your alarm for 20 years from now. Hopefully, when you wake up, you can thank Pamela, Geert, Robert and some of us even for keeping our country free, now tuck yourself back under the covers and sleep well.

That, right there, might be your answer.  Reasoning with these people is pointless — as this genius declares here, the game is over.  They’re finished.  Their mind (and it is one mind, and not several independent ones) is made up.

The jokey point to be made here is that we now might get random calls to 911 about terror suspects who were, simply, making lunch.

The serious point?  This sort of thing is going to be a prominent part of American politics for the rest of our lives.  You heard ’em — they have decided and are not moving an inch.  It’s not rational at all — they’ve just declared war on soup, for Christ’s sake.  But it will be there, in some form, in American politics forever into the future.

Apparently, the teabaggers fail to understand that in their much-beloved “free market” companies will make stuff for pretty much anybody that HAS MONEEZ.

They’re also apparently unspeakably pissed about kosher foods, something that I thought even the most resolute Bircher anti-Semites had given up agitating about decades ago. H8rs gonna H8, I guess.

@al2o3cr: Given the pro-Israel bent that wingers usually have, I find the anti-Kosher sentiments hard to fathom. But, like I say, nothing shocks anymore.

Packaging Manditories, like an MPAA Rating, for example, or a Kosher or Halal-approved bug, are placed on packaging for one of two reasons:

1. They are mandated by industry standard or law.
2. They are desirable from a marketing standpoint.

Businesses strive to have as few Manditories as possible, as the more Manditories are on a package, the greater the chance of error, which increases possible revision cost during creative layout. So since I am almost certain that law does not dictate placement of a religious seal of approval, the only reason I can think of for adding a “Halal Approved” bug would be that Camballs’ marketing department looked at the region and determined that there was a large enough Muslim population for the bug to help boost sales.

Why do teabaggers hate the free market?

BTW Teabaggers, eating Halal food doesn’t make you Muslim or want to strap a bomb to your chest.

I happen to live where they sell the soup in question as there are quite a few Pakistanis (one of my neighbors is.) In fact, I joke (quietly) that I’m the one who is bringing down real estate prices because I’m one of maybe two homes occupied by a yellow person/family within my subdivision.

I’ve grown fond of Shwarma and Hummus, Teabaggers. It’s not like I really enjoyed everything over cooked and/or covered in mayo. Or your fondness for stinky cheese.

Brown and other tinted people live here. Deal with it, Teabagger idiots.

@ManchuCandidate: “Think of your children, pledging allegiance to the Maple Leaf. Mayonnaise on everything. Winter — eleven months of the year. Anne Murray. All day… every day.”

Wait. Having halal food for sale means that Sharia is on the way? Like having kosher food around means that the super-Orthodox wack jobs in Israel are running U.S. society (except for the media, of course)?

@Dodgerblue: Am I going to have to start wearing one of those wide-brimmed black hats?!?!!? It won’t suit my complexion.

And to cross threads, I’m truly sorry that Pam got to Campbell’s Halal before we did. You just can’t compete with professionals.

@Mistress Cynica: And I dolmas, for some reason. Though it is a propos of nothing.

Saw this kerfuffle the other day, but can’t say I fathom it. There are plenty of stores and restaurants in my neighborhood that proudly state some goods are halal and/or kosher. They really are very similar standards.

We just make sure our doors are locked and/or we are watching the gate in case the fugitive decides to make a break for it across our patio. To be fair, this did actually happen to me 20 years ago when I lived in a very strange part of Oakland.

Personally, whenever I see a halal and/or kosher stamp on some food-like substance, it makes me more likely to try it.

@Benedick Arnuldsson Manpants: Back in the Estados Unidos? Did you smuggle in any weird fish products? BTW, speaking of dead fish, you’ll be glad you missed a revival of “They’re Playing Our Song” at UCLA which was just fucking awful except for Stephanie J. Block.

@Dodgerblue: I brought back two rocks. In my suitcase. It was heavy.

@lynnlightfoot: I was hoping someone would follow up with an ellipsis. :-)