Stinque
Home Latest Comments Log in
If it smells, we’re on it.
Stinque
Lovely day for a Perp Walk.
2010 Elections, Kah-lee-fornication 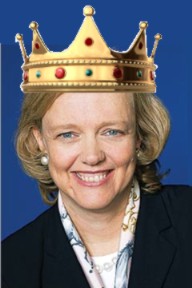 If it’s Tuesday, there must be another ex-domestic worker of NutMeg and Harsh in the news. This time, the person is a U.S. citizen who was hired to be a nanny and personal assistant/jack jill-of-all-trades to the Harsh-Whitmans.

Jill Armstrong worked for eMeg in 1998, but lasted only two months before she quit because she “had trouble” getting paid for the time she had worked, and because of “challenges” in supervising the family’s two notoriously ill-behaving sons. (Note: These would be the two children who Meg was too busy raising to vote).

Ms. Armstrong approached the San Francisco Chronicle to say that she believes the allegations made by former Whitman maid Nicky Diaz.  Armstrong described Whitman as “cheap” and not wanting to pay the agreed-upon salary for readying the Harsh-Whitman’s new home upon their move to Palo Alto from Boston.

The most interesting part of the story for me, however, has to do with the IRS and tax reporting. According to Armstrong,

Her biggest problem, she said, came months later when she was ready to file her taxes but hadn’t received a tax form from Whitman. She called her former employer to say, “Meg, you did not give me a W-2.”

Armstrong heard nothing and “had to threaten to take her to the IRS” before Whitman’s accountant called back and said, “Give me the numbers; give me the hours,” she recalled.

“That’s Meg’s responsibility,” Armstrong said she replied. “Isn’t she supposed to have all that written down?”

“He said, ‘Look, will you work with me?’ ” Armstrong said. “And that’s how we came up with the numbers.”

And then they all clicked “Buy It Now.”

@mellbell:
$2,600 a month might get you half an apartment in PA which explains why the salaries in the region were/are so insane.

@ManchuCandidate: I know I don’t have to explain it to you, but they’re called roommates. I don’t love having them, but that’s the cost of living near Metro in a safe neighborhood with lots of amenities within walking distance. And a quick look at craigslist shows that a room in an apartment there is comparably priced.

I could live like a decadent Roman emperor–complete with male concubines–on $2,600 a month in Arkansas, where I went to undergrad.

Ace of Base and dirt-cheap rent are what I miss most about the 90s.

@mellbell: Mrs RML loves the idea of income property, but guess who gets to do all the maintenance and tenant relations? She had a tenant one time who flicked her boogers on to the ceiling, as I discovered when we were painting the place, then there was the old trust funder who trashed our place back in the ancestral homeland. She got less than $100 of her deposit back, and that still didn’t cover the weeks of effort we put into cleaning it, nor were we able to restore the landscaping (thanks, yappy little dog). We were able to unload the place before the real estate market up there crashed.

In related news, we’re looking to get out of our neighborhood, which began to decline about 2-3 years ago but is doing so faster now it seems. The really nice places around us would frown on my using a chainsaw and air gun target practice in the backyard, though, what with the homeowner association Nazis and their restrictions. I like a little rustic funkiness and doing my own work landscaping and building shit.

17:4 And the woman was arrayed in purple and scarlet colour, and decked with gold and precious stones and pearls, having a golden cup in her hand full of abominations and filthiness of her fornication:
17:5 And upon her forehead was a name written, MYSTERY, BABYLON THE GREAT, THE MOTHER OF HARLOTS AND ABOMINATIONS OF THE EARTH.
17:6 And I saw the woman drunken with the blood of the saints, and with the blood of the martyrs of Jesus: and when I saw her, I wondered with great admiration.
17:9 And here is the mind which hath wisdom. The seven heads are seven mountains, on which the woman sitteth.
17:10 And there are seven kings: five are fallen, and one is, and the other is not yet come; and when he cometh, he must continue a short space.
17:11 And the beast that was, and is not, even he is the eighth, and is of the seven, and goeth into perdition.
17:12 And the ten horns which thou saw are ten kings, which have received no kingdom as yet; but receive power as kings one hour with the beast.
17:15 And he saith unto me, The waters which thou sawest, where the whore sitteth, are peoples, and multitudes, and nations, and tongues.
17:18 And the woman which thou sawest is that great city, which reigneth over the kings of the earth.

St. John the Devine was trippin’ balls when he wrote that. Have you heard the Avenged Sevenfold version of that?

@nojo: I used to read chapters from the Apocrypha
to Son of RML as bedtime stories.

The impression that I got from reading the article was that number of $5,200 was pulled out of some accountant’s ass, especially since she is also saying she wasn’t paid for all the time she worked. Using ¡Andrew!‘s math of $16.25 an hour before taxes isn’t a lot if you’re putting up with a lot of abuse from an entitled families. Most full-time nannies/assistants in Silicon Valley make that much, it’s roughly the going rate [I know people who are on both sides of those arrangements]. But roughly $2500-$3000 a month for no more than 40 hour weeks.

This was back in 1998, during the first round of the dot-com boom. One bedroom apartments in Shallow Alto were going for over $1200-$1500 a month, and given this woman’s age, she may have had family of her own to support (which makes it harder to do the roommate thing). Rent on two bedroom houses in the more working-class towns surrounding PA (i.e. Mountain View, Redwood City) around that time was generally around $2000 – so still a lot if you have a roommate. East Palo Alto is cheaper but in 1998ish was still pretty bad in terms of gangs and crime. The only way to really save on rent was to double up and then double up again – i.e. people living in illegally-converted garages, multiple families in one house, etc.

In any event, it’s not the pay that I find interesting (apparently Nicky Diaz was making $23/hr which is even better coin). It’s the second IRS issue/inability to manage these things when she’s running on a “vote for me, I’m a brilliant manager” sort of theme.

I want that on my death certificate. It’s better than “complications from fatness” or whatever the hell I’m slated for now.

@nojo: I’ll bet the dude was a Gnostic, and also that he was not talking prophesy, just using coded terms to talk about what were current events at the time. I’ve read, for example, that Hebrew letters also stand for numbers (or at least they did back then), and that if you use the letters that stood for “666” it gave you the consonants that spelled out “Nero” (they don’t use vowels, remember).

I don’t know if that is true but it sounds good, don’t it?

@mellbell:
That bill was even with roommates (in 2005 if I recall.)

It was the tech boom that caused rents to skyrocket.

@SanFranLefty: The fudging-the-numbers aspect of it is definitely the most damning part. It’s rare, truly and fortunately, but I can tell when one of our attorneys hasn’t been keeping good track of their time because all of their billings will be in increments of .5 hours.

Out here, I could live a like a queen on that amount of money.

May I threadjack back to the beginning? Her sons are loathsome creeps.

@Dodgerblue: Yes, they are. I just linked to some of the worse stories. They are the poster children for Warren Buffett’s position on inherited wealth and for the need for a massive inheritance tax.

TJ/ Jamie Sommers /TJ almost makes me want to move, and then I think of the heat and the distance from the ocean.