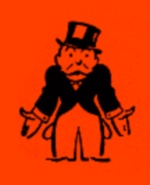 Fox News comes late to the party with a story about Todd Henderson, the U. Of Chicago corporate law professor who recently opened up to the world on the trials and travails of an average American family struglling to get by on a mere $400,000.00 per annum (we covered it some time ago). As you might expect, the Fox News profile is gentler on the good professor than most such stories, quoting experts who note that:

“Any time you want to take away a sizable chunk of people’s money, it has a big impact.”

and wrapping up with this bit of wisdom:

“But the bottom line… is that no one wants to pay more taxes.”

More interesting than Fox’s predictable take, perhaps is the reaction from Fox News commenters, many of whom, for some odd reason, assume that this professor of corporate law must be a Democrat. So for your edification, words of wisdom from a few choice Fox News commenters:

rob_m@yahoo_:Just like a (D), no matter how much you have, 1) you need more and 2) Somebody Else needs to cough up.

wrestlingmandan: If $400,000 a year means you are rich, the American Dream does not exist anymore.

jjb18018: If all those who complain about this guy being nuts for saying he is struggling at 400K were to look inward and think if they hit the lottery would they keep the same car the same house? One of the perks of wealth is the ability to afford things a tad easier. I don’t blame anyone for wanting something more.. What I think we are forgetting is that what this guy is really saying is what is true for ALL of us..

imstrider: As long as our President continues to play the class warfare game in his comments, people are going to play along and whine about how tough they have it. I myself am making a cool $30,000 in a leadership position, and believe me, I don’t have a whole lot of money for anything above and beyond bills and more bills. interestingly enough, I make ‘too much money’ for many people who just can’t find work. Who knows REALLY.

russ_s@yahoo: Since when is rich defined as making over $250K? That’s just Obama’s class-baiting. Rich is owning a yacht with a helicopter on it. Hello?? Todd Henderson’s not rich.

thanks4nothin: It is a sad day for America when a person is ridiculed and smeared for being successful. Under a communist regime, these sort of tactics are the norm. If the rich can be demonized, then everyone should be “equalized” on an even playing field.

rgarcia339: He probably would not be struggling if he could keep what he earned just like you (in response to a commenter who says he “dreams” of making even 100K per year).

Fox News. Yes, the readership is even dumber than you imagined.

My heart goes out to him. What’s left of it.

TJ: Speaking of higher education in the Midwest, who thinks this assistant attorney general in Michigan has some closet case issues, what with his one-man stalker campaign against the gay kid who is president of the University of Michigan student association?

That guy needs to join forces with his ideological twins in the Taliban – he’s got the same rationale on the housing thing (“OMG everyone gonna get raeped”) as they do on women wearing anything more revealing than a tarp.

Re: the Fux Nooz commenters – I think we found the evidence that O’Donnell was looking for. They’ve clearly just barely gotten past the “throwing poop” phase.

@SanFranLefty:
Even I know he’s GAY.

I had commented about this on Gawker and someone replied:
“From his first word, I knew he’s so far in the closet he’s the Queen of Narnia.”

His problem is that he thinks he’s a billionaire living on a millionaire’s wage.
Conrad Black was thrown in the slammer for doing something about that.

Ever wonder why most lottery winners and a lot of SPORT people go bankrupt? I don’t.

@SanFranLefty: The ones who bitch about gays and gay sex the most are the ones who are A) either not getting any or B) are complete schlong-gobbling whores who frequent t-rooms, visit dirty bookstores, have Craigslist ads up in the m4m section everytime they’re out of town, and go to anonymous sex clubs.

@SanFranLefty: That interview is crazy. I love that he meets the definition of cyber-bullying in the state of Michigan, hopefully the gay guy is successful in suing the pants off of the asshole. I mean, with all of the recent stories about suicides amongst gay kids for bullying, it is just surreal that this is coming from an adult.

@homofascist: These suicides are really angrying up my blood. I think the little shits who bullied these kids need to go to juvy and their parents need to be beat to a bloody pulp.

@SanFranLefty: My word. “I sense a lot of anger in your voice, Anderson, and I don’t understand where that’s coming from.” That almost tops “Neville Chamberlain was an appeaser, Chris.”

@homofascist: Ha, you said “adult” like it could apply to this guy. At least half of the technically-adult citizens of the US are little more than post-pubescent children.

@rptrcub & homofascist: Like today’s suicide? And separately, the 13 year old in Kern County was taken off life support and died yesterday.

@SanFranLefty: A fourth degree felony penalty for invasion of privacy is not nearly strong enough in this case. Negligent homicide? Hate crime enhancement?

So am I the only former prosecutor here?

I’ve been commenting, against all reason, at a conservative Christian site whose author I find interesting. Most of the commenters are your better class of fundies and there is a mix of some very articulate homos. The disconnect from reality displayed by the fundies is bewildering without being in the least little bit interesting. I’ve been trying to make the point that the kids don’t act in a vacuum, that they are policing the gender borders set down by the society in which they live. Which I do believe. To blame the kids alone is like blaming the ‘rotten apples’ at Abu Ghraib. But to admit even that much, even to consider the possibility provokes cries of religious persecution. Better to see kids die than to try to address this in a way that might be meaningful. Also, I could be wrong about this but I don’t think this happens in other countries, at least not to this extent. I certainly never experienced anything like it. Mind you, most of the prefects at my school were in love with me so perhaps my experience wasn’t entirely typical.

And I would like to stress that I am in no way against Christianity itself. I can respect faith; I can even wish I had it sometimes; but I do deplore the vicious ways in which it is being perverted and exploited to serve a political end. And these kids are the collateral damage of the culture war.

@Mistress Cynica: @Benedick Arnuldsson Manpants: A couple things that you can do to help:

(2) Spread the word about the It Gets Better Project trying to reach out to youth who are going through hell because of their (perceived or actual) sexuality.

@SanFranLefty: Thanks. Willdo. The It Gets Better Project might really take off.

It’s amazing that the families of these dead kids don’t click on the bullies and their school enablers. If my kid were bullied to the point of suicide, I’d be going totally Death Wish on their asses.

@Benedick Arnuldsson Manpants: Have you watched some of the videos that people have uploaded? There are some amazing ones.

And I have to give props to two terrific nonprofits: The Trevor Project, which is an anti-suicide program targeted at LGBTQ kids; and the Gay, Lesbian and Straight Education Network which designs educational campaigns and does a variety of advocacy and research about gay kids in schools.

@SanFranLefty: You should hear the fundies on the subject of GLSEN. School recruiting, propaganda and stifling of religious dissent. Must not be allowed near the schools. Which is why youtube might just help. Although it will be painted as a recruiting tool.

I will just leave that last sentence as it stands.

ADD: And I’m crying after he interviewed the parents of the kid in California who killed himself because of all the bullying.

@SanFranLefty: Did you see the segment about the kid in Texas? He was only thirteen.

@mellbell: Texas or Kern County? I was multitasking. Not much difference between Bakersfield and Beaumont, frankly…

On a happier note, I made an amazing chicken with porcini sauce today. The sauce was easy, I think even Manchu could do it.

@SanFranLefty: My high school (in the bluest part of a very red state) had a gay/straight alliance ten years ago, and it’s heartbreaking to think that something as simple as that (assuming the schools don’t go for the nuclear option of banning all after-school clubs, as some have done) could’ve saved these kids, but I really think that having that solitary safe place at school among their peers could’ve made the difference between life and death.

@mellbell: Granted I’m older than you and from a redder part of the country, but man oh man, how I wish I could have had one teacher in high school as willing to be as open-minded as this high school English teacher in Omaha. Holy Fucking Shit. Next time I’m in Nebraska (actually I seem to go there about once every three years, oddly enough) I’m going to buy that woman dinner. And I implore the Midwest Stinquers to do the same.

But no arguments here. I am very bad with sauces.

@ManchuCandidate: I keed, I keed. You’re the one who said you’re bad with sauces. I often have problems with the flour, but this one worked for me. I think the secret in this recipe was deglazing with vermouth.

Wow – the teabagger / “Ghey Conspiracy” fans are going to have a field day; she’s from KENYA! :)

Clearly just another cog in the great Kenyan scheme to sap and impurify our precious bodily fluids, or something…