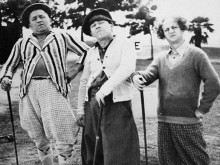 During the reign of terror of our old friend, Tom DeLay, there was one thought that kept coming to mind: “would somebody take him out to a baseball game or something?”

It was a semi-serious thought.  Everything about the Hammer screamed a single-minded focus on political gain — mostly, through cold, calculating attempts to make the Democratic Party look like a bunch of baby-eating, God-hating, economy-killing monsters.  My strong desire was to see verifiable evidence that Tom DeLay had the capacity to do something fun — in the hope that taking time for the finer things in life would make DeLay less of a jerk.

You see a bit of this in the lip-flapping about Stephen Colbert’s performance on Friday before Congress — as further explained post-jump.

Naturally, Steve King (R-Iowa), who is probably the nastiest anti-immigrant advocate north of Arizona, totally missed the joke, saying: “I think it’s an insult to the time, an insult to the intelligence of the American people.”

The key here is “insult to the time.”  First of all: “the time” is an inanimate concept — which cannot be insulted, by definition.  [Unless you are referring to Morris Day and The Time, in which case you will have to answer to one P.R. Nelson, Esq.]

Growing out of that truth is the fact that what this answer was all about was pure fury.  The brain of Steve-O could not process the irrationality of what he was saying (on Fox News, appropriately enough).  Objective One: Destroy the man who basically put the lie to the “deport-them-all-and-let-God-sort-them-out” idea that King implicitly fights for day in and day out.

But also: it should be remembered that this came on a Friday before a mad dash back home, to begin campaigning in earnest.  Just about anything that Congress manages to accomplish on a Friday is a bonus, barring extraordinary circumstances.

The most telling thing about this, though?  There is no time to laugh.  How can there be laughter when our society is being rotted from within by people who are willing to work themselves to the bone for scraps?

Of course, the Democratic leadership came to the defense of a guy calling conservatives on their rhetoric, to the benefit of their efforts to appeal to the Hispanic — no, wait:

Comedian Stephen Colbert’s satirical testimony before a House subcommittee last week was “an embarrassment” that should not have happened, the second-ranking House Democrat said Sunday.

“I think his testimony was not appropriate,” House Majority Leader Steny Hoyer (D-Md.) said on ” Fox News Sunday.” “What he had to say was not the way it should have been said.”

And so: a humble request.  No matter who has control of the Congress next year, I demand that everybody on Capitol Hill CHILL THE HELL OUT.  A loss on a piece of legislation may suck.  But it is not the end of the world.  A win will not be a cure-all, requiring laser focus on nothing but total victory and the complete destruction of the other side.

We had a damned Civil War — Ken Burns has about twenty hours of montages to prove it.  If that didn’t kill off the United States, neither will gay marriage.  Or a few million Latin Americans trying to grab the American Dream by any means necessary.  Or a little bit of a wait for free health care.  Or paying a little bit more in taxes to cover the bills.  Or slashing any number of overweight governmental agencies.  Or making regulations useful, rather than harmful (however you measure that).  Or telling Israel or the Palestinian Authority or Iran or North Korea or Venezuela to shove it.

Everything’s going to be fine.  Go to a movie every once in a while.  Take a walk in a park.  Go to a baseball game and stay for the whole game.  Breathe deeply.  And, for Christ’s sake — laugh.

DeLay is as about as reformable as Julius Streicher. All the ballgames in the world would not humanize either of these monsters.

@FlyingChainSaw: Yeah, it was a faint hope at best. But I have a supreme faith in baseball to soothe even the most savage beast.

Seriously: if baseball were any slower, it would be farming. And not the back-breaking migrant kind either, but tending to miles on miles of amber waves of grain with huge, slow machines. The only people driven to a rage while watching baseball are incredibly drunk.

Colbert did more for the cause of migrant farm workers between his testimony and the video of him being one of 16 US citizens who took up the UFW’s “Take our Jobs” offer.

@chicago bureau: Baseball may be mild, but look out for the cricket fans. When Mr. SFL and I were in Oz almost 10 years ago, Sydney was seized by cricket hooligans rioting.

Speaking of the southern hemisphere, how cool was it to see my favorite Kiwis the Flight of the Conchords *and* also a rapping Stephen Hawking on tonight’s episode of The Simpsons? FOX was totally pimping the “Glee” guest stars, we almost didn’t tune in because of that, but who knew we’d have the agnostic scientist and Wellington’s greatest export on?

TJ/ desperately seeking help from Mac experts. I was away for several days, & left my laptop @ home. When I turned it on tonight, I got a message (in 5 languages) telling me it needed to be restarted. I held the button down to turn it off & pressed it again to restart, as instructed. It makes the sound like it’s turning on, but then I get a blank pale grey screen. After a few minutes it goes dark, then tries to restart, with the sound. How screwed am I?

@Mistress Cynica: Try holding the button down for ten seconds, see what happens. If you have the original system disc, try booting from that, then checking the hard drive with the utilities.

If you don’t get the Chimes of Death, the computer itself should be okay. The question is whether your hard drive is toast.

@Mistress Cynica: Restart it from the disc. Do you have the external drive? Then do what noje advises. Sounds like it can’t find the system on the drive.

@Mistress Cynica: After doing what Nojo suggests, I would next interrogate the cats about what they were up to with your laptop in your absence.

@nojo: I think I got the chimes of death. When I hold the button down for 10 secs, I get an obnoxious tone I’ve never heard before. This means I’m fucked, right?

But seriously, in addition to the suggestions above (boot from CD) I’d recommend resetting the PRAM and the SMC. Apple support articles:

Not sure why either of the above would help, but they do sometimes, and it’s the first thing Apple Support would typically have you do.

@Mistress Cynica: Get thee to an Apple Genius Bar.

@Mistress Cynica: You’re talking about your Air? Do you have a CD ROM drive? If you do you should be able to force it to start from that. Put in the disc, connect the drive, and restart. Hold down the C key. If you don’t have the drive you can’t use RemoteDisc. At least I don’t think you can.

Otherwise take it to an Apple repair. It could well be that something is scrambled on the drive and you don’t need physical repairs. If you do need a new drive I’d recommend you let Apple do it. They charge more but won’t screw up your computer. I had a local tech repair my Powerbook and he hurt the case.

It can be fixed.

@Benedick Arnuldsson Manpants: My other hunch is that Cynica has a bad memory chip, which is very easy to replace. But we’re at the point where I’d have to Lay Hands on the patient to know.

@al2o3cr: @Benedick Arnuldsson Manpants: @nojo: Thanks, guys. I talked to Apple Care this AM and they said all the same things. Amazingly, there is a certified Apple repair place here in town so I don’t have to take it to PDX. Dropped it off this AM, should know something in a day or two. Appreciate the support.

@Mistress Cynica: I bought the drive for just that kind of thing. Then left the disc with the system software in a hotel room in Prague. Along with my innocence.