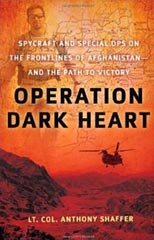 Title: “Operation Dark Heart: Spycraft and Special Ops on the Frontlines of Afghanistan — and The Path to Victory”

Blurb: “Important Message for Customers: On Friday, August 13, 2010, just as St. Martin’s Press was readying its initial shipment of Operation Dark Heart, the Department of Defense expressed concern that its publication could cause damage to U.S. national security. The publication of the initial edition was canceled. However, after consulting with the author, Lt. Col. Anthony Shaffer, St. Martin’s Press agreed to incorporate some of the government’s changes, which includes redacting classified text, into a revised edition, which is releasing on September 24.”

Review: “I don’t own this book — but obviously neither do most, if any, of the other reviewers.”

Footnote: Is it #65 because the Feds bought out the first printing?

From the US Gubbiment With Redaction

In this case, rather than “Buy or Die”, the kickback link should read “Buy and Die”. Extraordinary rendition anyone?

a national holiday for the delicious and demented:

My eggs this morning were really tasty, and served piping hot. I wonder what inspired the missus.

@baked: Yes, it is and my profile picture is really a current photographic portrait. Thanks, everyone!

@Promnight: She probably read about this.