Another Oil Rig Explodes in Gulf of Mexico

The U.S. Coast Guard is reporting that an off-shore oil rig has exploded 80 miles south of Louisiana and west of the Deep Horizon site.  The blast occurred at 9:30 am Central Daylight Time, rescue crews are en route.

UPDATE: CNN says all 13 workers on platform accounted for, one is injured.

11:55 EDT UPDATE:  Oil rig is owned by Mariner Energy, whose stocks have dropped 4% in the past hour.

12:04 EDT: New Orleans Times-Picayune reports that all 13 workers are in the water in immersion suits that prevent hypothermia, awaiting rescue, and the platform is still on fire.

12:15 EDT: CNN now saying that all 13 workers are headed to the hospital. Coast Guard says that the rig was not “in production” at the time of explosion but unsure if there is a leak or “any additional concerns of pollution.”

12:45 EDT: Conflicting reports depending upon the source as to whether the platform was in 350 feet of water or 2500 feet. 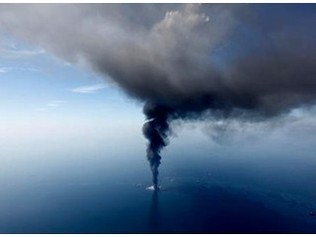 Department of Irony, Courtesy of DodgerBlue: Mariner Energy had its employees rally yesterday in Houston to protest the Obama Administration for “trying to break us” with deep-water drilling moratorium.

17:45 EDT: Fire now out, company says the seven wells associated with the rig are capped, but there was no blowout preventer on the oil rig. 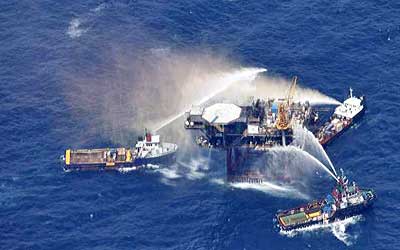 SanFranLefty
11:54 am • Thursday • September 2, 2010
comment »
Choose Your Delusion
What Cheney Knew, and When Cheney Knew It If You Look Closely, You Can Actually Pinpoint the Exact Moment Her Mind Breaks in Two
26 Comments
ManchuCandidate

All those safety rules and regs are still worse than being lit on fire, explosions, maiming and death.

Given the mature nature of this area and the production declines characteristic of most wells in this region, the goal of our shallow water or shelf operation is to maximize cash flow for reinvestment in our deepwater and onshore operations, as well as for expansion into new operating areas.

@SanFranLefty: I guess “mature” in that context means “hey, what could go wrong?”

who gets to apologize first?
to the oil company I mean.

Of course, the coincidence with the rally will further inflame the tinfoil-teabag crowd. Expect to hear the phrase “Chicago-style” trotted out some more.

@all: can we trot out pictures of Palin in full Eva garb, oil derricks for breasticles and the slogan “Burn baby, Burn!”! on it? Only fair for all the Hopey as Hitler iconography.

The Coast Guard is reporting that a mile-long oil sheen is spreading from the site of today’s oil rig explosion in the Gulf of Mexico, according to the Associated Press.

@karen marie: The oil company is denying that a sheen or slick exists. Next, they will blame it on flying monkeys.

Either way, the teabaggers won’t get the reference.

@Dodgerblue: The oil company has now also back-tracked from their statement that the rig hadn’t been in use for two months to say that as of last week it was producing 9.2 million gallons of natural gas a day and 1400 barrels of oil a day.

At least we have established that it’s in more shallow water than originally reported by the Coast Guard.

When will the eco-terrahists stop shoving apocalyptic oil platform disasters down our throats? Only tax cuts for the super-rich oil barrons can save us.

@¡Andrew!: If taxes for everyone and every company making in excess of a billion a year were simply eliminated this would never happen. Why does anyone have to point that out any more?

@FlyingChainSaw: Carly Fiorina was making that point yesterday in her debate against Barbara Boxer, right before she said this gem:

“China has done wonderful things to create jobs,” Fiorina told reporters after the debate. “China rewards innovation better than we do. So yes, learn from what the Chinese have done.”

Which lesson it is to learn, I’m unsure. The raping of the environment, the labor conditions, the use of poison in dog food and lead in children’s toys, or the rampant intellectual property theft?

Not to mention the irony of an avowed capitalist Republican praising the centralized and socialist economy of a communist country.

@SanFranLefty: Yes, the unemployment rate of 14 year old girls there is very low.

@Dodgerblue: No doubt partially due to the confluence of gender bias, the one-child policy, and foreign adoptions, so there’s not that many 14 year old girls to hire in the first place….

@SanFranLefty: Oh, yes, exactly, American companies need to be able to roll tanks at anyone asking for a wage of more than $5 a week. And they need to be free of ridiculous requirements that prevent American companies from dumping mercury into rivers. Commie-Lover Carly is just fucking despicable and incoherent. The fucking Chinese live in a fucking slave state. She should be deported to Outer Mongolia to chew the shagnasties off of the assholes of yaks, she thinks it’s so pissa.

@SanFranLefty: Did you watch the debate? My wife wanted to watch “Top Chef” so that’s what we did. I hear that Boxer tore Carly a new one.

I remember recently there being chatter by Republicans about how things would be better if we were more like China, but this is the only specific example I can find with a quick search of the google:

“… the climate for business investment is far more certain in communist China then it is in the U.S. here,” [Ron Johnson, Republican Senate candidate in Wisconsin} said. “We’ve created such a high level of uncertainty in this economy because, quite honestly because of the agenda that Senator Feingold represents.”

The host sounded a bit baffled by his response.

Johnson then went on to say he believes it’s the private sector that creates jobs, and that the U.S. should have regulation that doesn’t get in the way of job growth.

@Dodgerblue: Nope, didn’t watch it, but I think Tommie did based on his comment on the prior post.

There was also a nice rundown on The Daily Show a while back. Newt announces how much he lurves the Chinese method at about 6:20.

@karen marie: They are babbling children. A friend sold a company he co-developed with a big Chinese outfit and it was hell, every hour. There is no real law, no real business convention regarding contracts, technical expertise is thin and variable at best and everyone lies all the time. He could not wait to get the fuck out with his investment and some jingle. The PRC provides fucking slaves held captive for really big companies to abuse. They’ll set you up with Lo Fat whose cousin will get your crap made on the third shift really fucking cheap. Proof again the neocons are neomedievalists.

@FlyingChainSaw: Doesn’t matter if you call it capitalism or communism, at the end of the day it’s all the same – it’s about the oligarchs consolidating more money and power and fucking over and exploiting the masses.