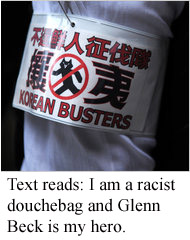 The New York Times this morning reports on the rise of an ultra-nationalistic, ultra-xenophobic, far-right movement in Japan:

The demonstrators appeared one day in December, just as children at an elementary school for ethnic Koreans were cleaning up for lunch. The group of about a dozen Japanese men gathered in front of the school gate, using bullhorns to call the students cockroaches and Korean spies.

Inside, the panicked students and teachers huddled in their classrooms, singing loudly to drown out the insults, as parents and eventually police officers blocked the protesters’ entry.

According to the Times, these groups are largely organizing through the internet and are made up mostly of young men,  either jobless or working menial jobs. And unlike traditional far-right Japanese groups (who generally cruise around Tokyo in paramilitary-dress on the backs of trucks painted to resemble infantry vehicles, but otherwise seem to leave people alone) the new rabble rousers aren’t concerned about looking like a pack of douchebags by openly harrasing groups of foreign born children:

Since first appearing last year, their protests have been directed at not only Japan’s half million ethnic Koreans, but also Chinese and other Asian workers, Christian churchgoers and even Westerners in Halloween costumes. In the latter case, a few dozen angrily shouting demonstrators followed around revelers waving placards that said, “This is not a white country.”

So where do these awful people draw inspiration for these acts of obnoxious stupidity? Well, I’m glad you asked:

Mr. Sakurai says the group is not racist, and rejected the comparison with neo-Nazis. Instead, he said he had modeled his group after another overseas political movement, the Tea Party in the United States. He said he had studied videos of Tea Party protests, and shared with the Tea Party an angry sense that his nation had gone in the wrong direction because it had fallen into the hands of leftist politicians, liberal media as well as foreigners.

Charming…. but not wholly unexpected. On the bright side, with our industrial sector decimated by decades of neglect and the rise of a lucrative, but ultimately parasitic financial sector,  it’s nice to see American exports growing. Would have preferred to see us exporting something other than crypto-fascism, though.

I was about to say that ultra Nippon assholery isn’t new as my Korean relatives, the Chinese and any WW2 veteran of the Pacific Conflict can attest… but Gren Bekc?

Now all they need is a Sarah Palin clone. Maybe someone from Hokkaido who can see Russia from her back yard and wants to reclaim the Kurils.