Everything the Government Does, the Private Sector Can Do Better 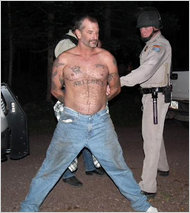 Late last night, John McCluskey (pictured left) and his accomplice, Casslyn Welch, were arrested by sheriff’s deputies in a northeastern Arizona forest. The duo were wanted after having escaped from prison, and are suspected in the murder of an older couple at a campground not far from where they were apprehended.

But it is the nature of their escape from prison that is, perhaps, the most notable aspect of the story. You know how advocates of government privatization are fond of claiming that everything the government does, the private sector can do better? Well, guess what. McCluskey was being held in a private prison when he escaped. A local ABC affiliate has details of the daring, nearly impossible escape, carried out against all odds laughable prison security that made their escape possible:

A private company called MTC—Management & Training Corporation runs the prison in Kingman, under contract to the state. State Prison Chief Charles Ryan says MTC oversaw the state’s worst escape in more than 30 years. A state report found that prison was so poorly run the idea that Casselyn Welch was able to walk up to the fence and throw in some wire cutters, was just one example of the trouble there. The report found prison workers ignored the alarm system that might have warned them Welch was at the fence.  It had too many false alarms, including 89 of them in the 16 hours around the escape. Floodlights were burned out. Officers had inadequate firearms training and weapons were not well inventoried. 75 percent of the inmates did not wear proper I-D

In the midst of reports that private prisons have been lobbying Arizona legislators to pass tougher anti-immigration legislation in hopes that they might reap profits from running internment camps,  and in the wake of horrifying incidents in which private prisons bribed judges to hand down harsh, and unmerited sentences to juvenile offenders that they might reap the financial spoils of their incarceration, it’s time to ask the question: does it make any sense at all to hand our penal system over to coporate interests whose only concern is ensuring that this quarter’s profits come in higher than last quarter’s profits?

god I love that picture.

does that make me a bad person?

Why are the perps always shirtless?

I have 1/4 of a bad spy novel manuscript based around the idea of outsourcing government tasks.

I thought I was going over the top with the stupidity. It appears I was not.

@Benedick: I think he and his paramour were camping when arrested. Does the big tattoo say “Arizona”?

@Dodgerblue: I think it says ‘Daddy’.

This is completely in synch with all of my professional dealings with the State of Arizona. I’m just waiting to learn how the juice was spread to get the contract to these clowns.

@Dodgerblue: Maybe our boy was just pitching a tent.

@Dodgerblue: Yep. That’s how the park ranger recognized him. Always important to have ink that makes you readily identifiable when you become a fugitive from the law.

@Serolf: Forget about privatizing the prisons, take a second and think about what it looks like when governments privatize human and social services agencies to for-profit entities. Two words: Not.Good.

@SanFranLefty: There’s a show (tangentially) about that running at Annex right now. Clubfoot, or Tales from the Back of an Ambulance. Includes stories about for-profit nursing homes that make the pods in the Matrix look pretty homey and comfortable.

@Benedick: You say that like it’s a bad thing.

@rptrcub: Sooner or later you just know there will be wrestling involved.