This is a Test of the Emergency Rationality System 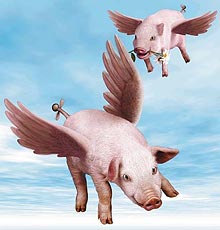 On August 28th my colleague Glenn Beck is going to lead an event on the mall in Washington, DC. It is the anniversary of Martin Luther King’s “I have a dream” speech. The event is causing much controversy …some support and some don’t support and some are even furious and upset. Yes he has a First Amendment right to do it…but what about the wisdom of it? Remember…the Muslims in NYC have a First Amendment right to build a mosque but most Americans don’t want it…and you have to ask the wisdom of the Muslims to push the issue. Just because you have the right to do something does not mean you should. My view? No mosque at ground zero and Glenn should move his event.

It does not help heal the country on so many fronts if we poke a stick in eyes.

Question for a colleague…. [GretaWire, via Media Matters]

When is asshole Beck going to be staying at the Lorraine Hotel?

@FlyingChainSaw: Did you have to look that one up? Because I’m really impressed.

No, it’s been the punch line of a bunch of off-key jokes. Should Stinque.com do an item about Beck’s upcoming appearance at the Lorraine Hotel and interview the sniper who will take care of him and Satan, who awaits his arrival?

@FlyingChainSaw: Ah. I remember the news at the time, but I never paid attention to the establishment. It’s not quite like Ford’s Theatre.

@nojo: Is it that obscure? My favorite bit of possibly apocryphal trivia about the Lorraine Motel (ahem) is that the reason it took so long for them to reach the police that day was that the receptionist had a heart attack when she heard what happened and wasn’t able to connect the call.

@mellbell: Well, obscure to me. Compared to the photo of everyone pointing from the balcony.

But I’ll hold my judgment in abeyance until others weigh in. Might just be my own ignorance at work.

If it’s such a hallowed place, why is it called “Ground Zero”?

@nojo: I got the reference.

But more importantly, when did Sarah Palin start ghost writing Greta’s posts, because they are a true abomination.

I find this significant because not only is Greta a fellow Foxie with Beck (as opposed to the Left raising the issue of Comparative Hallowedness), but Mr. Greta started SarahPAC.

In other words, yes, it’s a stoopid fucking issue, but I’m truly impressed that Greta’s playing fair with it. If you buy the premise of the Ground Zero Mosque, then I Have a Beck can also be criticized on the same basis.

@FlyingChainSaw: Beck has such a fucking martyr complex that he’d probably hire some poor PTSD stricken soldier to shoot him just close enough to put him in mortal peril, but not enough to kill him.

@FlyingChainSaw: Also, remember fuckface Glenn Richardson whom you wrote about a while back? He tried to kill himself again, after he was fined by the State Ethics Commission all but $500 fucking dollars after some financial campaign-to-PAC shenanigans.

@nojo: The Lorraine Motel is now the National Civil Rights Museum. I went there with Mr Cyn (who grew up in Memphis) and a friend. We were horribly late to meet up with family because we completely lost track of time and had been there three hours when it seemed more like 45 minutes. Very educational and very moving. Highly recommend.

Well, this is all proving enlightening. I can certainly reference the Ambassador Hotel off the top of my head, but the Lorraine has escaped my notice all these years.

@nojo: Oh I agree that it is of note that she is usually on the same side of the issues as the mouthbreathers, but I wonder if her post wasn’t made with a dash of irony? A slightly more intelligent but nonetheless Palinesque feint to underscore how unreasonable it is to build a mosque anywhere near lower Manhattan because, you know, all those people are tehrists.

@nojo: The Lorraine actually comes to me quicker than the Ambassador, but neither resonate with me like the Dakota does. Yes, I’m a maroon.

@Nabisco: Well, considering we were both 9-ish in 1968 explains why the Dakota would be more top of mind.

Oh, and Mad Men squeezed in a Malcolm reference Sunday. Can anybody name that location?

Yes, Lorraine Motel, and Oswald chose a room in a boarding house on the side facing the Lorraine. He shot from the communal bathroom window. King would stand on the balcony for long stretches of time, and no one in his entourage thought this was a bad idea. Heard a great interview with Hampton Sides who wrote Hellhounds on His Trail: The Stalking of Martin Luther King Jr. and the International Hunt for His Assassin, and he beats up on Jesse Jackson pretty darn good. Love that part!

@rptrcub:
“Beck has such a fucking martyr complex that he’d probably hire some poor PTSD stricken soldier to shoot him just close enough to put him in mortal peril, but not enough to kill him.”

I nominate you for Comment of the Day, Cubbie.

@nojo: Man, you’d asked me ten, twelve years ago when the autobiography was still fresh I could’ve nailed that one. Not a hotel. Possibly a church? Certainly somewhere one could speak publicly.

@mellbell: Audubon Ballroom. Will be filing that one away.

@mellbell: When the movie was still fresh, you mean, but yes. I hear the actual event didn’t take place in slow-motion.

@nojo: @mellbell: Stop talking, iTunes is saying it will be another 2 hours before the last two Mad Men episodes are downloaded…which it will be bedtime for SFL by then.

@SanFranLefty: No spoilers — it’s a throwaway line. Not like the NEKKID PEOPLE WARNING that resulted in nekkidness not worth being warned about.