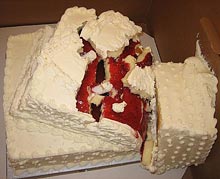 Prop 8 remains in effect in California.

The Ninth Circuit Court of Appeals granted a stay Monday afternoon, scheduling a hearing for the week of December 6 in San Francisco. Gay marriages, which had been set to resume as of 5 p.m. Wednesday, are back on hold.

Arguments must be submitted prior to the December hearing:

In addition to any issues appellants wish to raise on appeal, appellants are directed to include in their opening brief a discussion of why this appeal should not be dismissed for lack of Article III standing. See Arizonans For Official English v. Arizona, 520 U.S. 43, 66 (1997).

We’re not familiar with the case cited, but clearly the question of whether the Prop 8 sponsors have “standing” to appeal last week’s decision will be the first addressed.

Thanks to SFL for tossing us the court order.

I wasn’t aware “OMG TEH JUGE HAS TEH GHEY” was grounds for appeal. I can’t wait to see how they turn that into legalese.

After the elections. How convenient. Dammit, I’d just found the perfect outfit for Tommcatt’s wedding.

Hold on to it. We’re gonna win this one, I feel it in my bones.

I’d like to know who appointed the judges on the panel.

AOE v. Az basically says that initiative proponents don’t have standing to sue to defend a measure they sponsored and that they can’t sue as a representational association because they don’t have a direct stake (or concrete injury) in the matter.

ADD: Leavy is from Nojo Ancestral Homeland, Hawkins is from JamieSommersLand, and Thomas is from Montana and was on Obama’s SCOTUS shortlist.

@blogenfreude: I don’t know anything about Leavy or Hawkins so I’m not sure how they’d swing. Thomas should be solid.

@SanFranLefty: This came up last week — Leavy is a Very Familiar Name from the Point/Counterpoint years, but fuck if I know anything about him.

@Mistress Cynica: Yep, and I’m sure that eMeg and Cooley are going to be campaigning on this now for the Governor and AG races, but the expedited schedule means the hearing is before inauguration, which is the more important date.

@blogenfreude: BTW, Dodger passed me a note in the back of class and pointed out that the motions panel isn’t going to be the panel that hears the merits.

@TJ/ Jamie Sommers /TJ: Thanks — that was my guess.

And despite the frustration, it was probably wise to grant the stay — and hear the appeal on an expedited schedule. If they toss it out over standing, I presume the Supremes will have to overlook a shitload of precedent to overrule.

Not that the Supremes aren’t in the habit of overlooking a shitload of precedent. But still.

Jeez, what a day. Didn’t even get to DeLay beating the rap.

So does that mean we’re looking at six months-ish before we even get a ruling on whether the verdict can be appealed?

Not guilty by reason of insanity?

@Original Andrew: This is the appeal itself. The appeal includes the issue of whether Prop 8 sponsors even deserve to be in the courtroom.

Well the pro-H8 lawyer already stated in open court at the trial that he didn’t have to present any evidence, so this aughtta be a slam dunk.

@Original Andrew: From what I read of the appeal, the lawyer was wise to keep his trap shut.

The closest comparison I can think of was when Homer was on trial for some reason, and his defense attorney starts whispering to him about a su-PEE-na and he turns to the judge and yell-whispers “your majesty, I think this guy’s hitting on me!” It’ll be just like that.

Suck it, Ratzinger, you just got served.

I now have fewer rights than my Gay and Lesbian brethren in a third-world oligarchy.

@Tommmy: Mr. OA and I are making plans far in advance of my graduation from busyness school, and let’s just say they may involve fleeing the US Depression-infierno and my student loans for an endless summer in Margaritaville, ¿tú ya me entiendes?

@Tommmcatt Cannot Be Arsed To Think About Sharon Angle: I think that planning a Spring wedding would be a good idea. I like Cambria; maybe we could all go up there.

Ontario is lovely in the spring.

Damn, I just woke up from a nap and prop H8 is back on? Time for caffeinated coffee again. What a bummer.

Just as a matter of court politics, granting the stay keeps the Supremes out of their hair while they get their crack at the merits.

Everything that Judge Walker said regarding the denial of the stay makes sense both as to law and policy. After all, we had a period of same sex marriage pre-Prop 8 and the fundies heads didn’t assplode (regrettably).

However, we are talking about throwing out a piece of a State’s constitution. Also, we’re talking about breaking new ground in an area of social controversy. Courts move (too) slowly and carefully in such areas – when they move at all.

Link to the decision in the Arizona case referred to by the Court.

The short of it is that the anti-gay Justices at the Supreme Court could ignore the standing issues if they want to, but the Ninth Circuit could easily throw out the pro-H8ers on that ground.

I make no predictions as to when we will see either the end of the day on this bun fight, or any windows of opportunity for same sex marriage while the buns are flying.

@Walking Still: Let’s find a needle in that haystack…

In granting the petition for a writ of certiorari in this case, we called for briefing on the question whether AOE and Park have standing, consonant with Article III of the Federal Constitution, to defend in federal court the constitutionality of Arizona Constitution Article XXVIII. Petitioners argue primarily that, as initiative proponents, they have a quasi legislative interest in defending the constitutionality of the measure they successfully sponsored. AOE and Park stress the funds and effort they expended to achieve adoption of Article XXVIII. We have recognized that state legislators have standing to contest a decision holding a state statute unconstitutional if state law authorizes legislators to represent the State’s interests… AOE and its members, however, are not elected representatives, and we are aware of no Arizona law appointing initiative sponsors as agents of the people of Arizona to defend, in lieu of public officials, the constitutionality of initiatives made law of the State. Nor has this Court ever identified initiative proponents as Article III qualified defenders of the measures they advocated.

This is what Jamie summarized above. The 9th will toss out the appeal, while the Supremes will make a very entertaining argument for accepting the case.

TJ/”A preliminary survey found that Afghanistan
may have 1.8 billion barrels of oil in the north of the country, an official said. ” That’s in addition to all that iridium* and shit.

* Has nothing to do with reggae music.

@redmanlaw: Back in the day, it was all about oil pipelines.

@nojo: Like weasel, er lawyer, that I am, I must also point out the weasel words used by the Supremes on this issue:

“We thus have grave doubts whether AOE and Park have standing under Article III to pursue appellate review. Nevertheless, we need not definitively resolve the issue. Rather, we will follow a path we have taken before and inquire, as a primary matter, whether originating plaintiff Yniguez still has a case to pursue.”

The upshot is that the Supremes reserved for another day the issue of whether Proposition advocates, like the H8ers here, can defend a Proposition they rammed up the voters’ collective ass.

They put in that nasty language you quoted which the 9th Circuit can, and should, rely on too kick the H8ers’ pasty butts out of Court. However, they didn’t definitively decide the question, so when they get the Prop 8 case, anything could happen.

@Walking Still: Good point. Following longstanding tradition, they narrowed the issue as much as possible and ducked what remained.

So yes, the definitive judgment remains up for grabs. But jeez, what a can o’ worms if they decide that proposition sponsors have a special standing not granted to mere citizens.

@nojo: “But jeez, what a can o’ worms if they decide that proposition sponsors have a special standing not granted to mere citizens.”

As opposed to the special standing granted to corporations in campaign spending as compared to mere citizens? For fuck’s sake, I could TOTALLY see the RATS* on SCOTUS fucking citing Citizens United for the proposition that once a corporation, religion, or other group goes to all the trouble to fund and spend money with abandon in an election, they should at least get the honor of being designated a special group worthy of Article III standing, nevermind that 200 plus years of jurisprudence to the contrary.

*RATS= Roberts, Alito, Thomas, Scalia. A handy mnemonic to remember the pig fuckers on the Court.

They could have used Chemerinsky for BarBri, stupid spineless bastards. They totally punted (that’s a legal term of art) for no reason other than they’re askeered.

@TJ/ Jamie Sommers /TJ: Oh, so they might be making the case that Prop 8ers don’t have standing even more solid than it already is?

@Mistress Cynica: @SanFranLefty: Yes, a lot of folks will be making political hay out of this case; hopefully, progressives will, too, and they won’t sit around with their thumbs up their asses. At least these judges aren’t elected. That gives me a happy. Doesn’t mean folks won’t try to impeach them, though…

At this point, I actually *miss* Rethugs like Delay. Anybody else pine for the days when Republicans were just greedy warmongering assholes, instead of greedy, warmongering, race-baiting, religious-hatred-spreading, teabagger-loving MORONS?

Maybe it’s just me, but I seem to recall that it wasn’t long ago that in-office Republicans were at least *slightly* obliged to stay rooted in reality. Now we’ve got fools like Michelle “100% of the private economy was private before Obama” Bachmann and Paul “tax cuts don’t reduce revenue” Ryan on the stage…