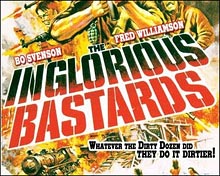 Update: The not-mosque backers are disputing the Haaretz story. See below.

We don’t know why (or how) Haaretz is breaking this news, but here it is:

After weeks of heated debate over plans for an Islamic community center near Ground Zero — the site of the 9/11 attacks on New York — it seems Muslim leaders will soon back down, agreeing to move to a new site.

The decision follows a high-profile campaign against the project that included advertisements on New York buses showing images of the burning Twin Towers, an iconic landmark razed when al-Qaida terrorists flew packed passenger planes into them in 2001. The New York Republican party is also said to be planning a hostile television campaign.

Sources in New York said on Monday that Muslim religious and business leaders will announce plans to abandon the project in the next few days.

But not before Harry Reid hands over his nuts to Pam Geller:

“The First Amendment protects freedom of religion,” spokesman Jim Manley said in a statement. “Sen. Reid respects that but thinks that the mosque should be built some place else. If the Republicans are being sincere, they would help us pass this long overdue bill to help the first responders whose health and livelihoods have been devastated because of their bravery on 911, rather than continuing to block this much-needed legislation.”

Congratulations to all for showing why America is still the beacon of hope to everyone on Earth.

Update: In a series of tweets, the “Official Twitter account of the Park51 Lower Manhattan (LM) community center project” disputes the Haaretz story:

There is no truth to the Haaretz story. It is wholly incorrect. We will be publishing a press release regarding this shortly.

Correction, we will be publishing an official twitter response to the Haaretz story and the Hamas comments.

Official: Reports by Haaretz are completely false. We are committed to plans of building Park 51 to serve the community of Lower Manhattan.

Good for them. America may now resume its carnival, already in progress.

Stand by — there may be a rebuttal in a moment.

@mellbell: Even more so. This is going to be a very ugly week.

@nojo: Week? WEEK??? You think this isn’t going to be up there with gays and guns in November?
Apparently nothing I was taught and believed about this country is true. Except that people are MORONS. /bitter rant

For crying out loud, it’s Monday and I can’t take this. Look, everybody, baby penguins who need names! A baby zebra with brown stripes! Shelly O, showing off the First Curves!

@Mistress Cynica: Granted the death panels of last August, but the story’s hitting a fever pitch today, and I just don’t see how that can last for ten weeks.

I, of course, consistently underestimate my fellow Americans.

@Mistress Cynica: Calmate, compadre. I just returned from Canada City (sorry Manchu, last minute add to the itinerary) and the only appreciable difference seemed to be the color of the money. Plus I seemed to spend a shitload more of it than I do down here. Plus the border guard upon entry was kinda snippy.

I enjoyed tracking the saga of the Tamil boat people through the G&M however.

@Nabisco: Darling, are you trying to calm me by telling me there’s nowhere else to go, that every place is now stupid and fascist? Because I gotta say, I don’t feel any better on hearing that. And 2 hours before I can have a cocktail. Great.

@Mistress Cynica: You’re lucky you have the time for a cocktail. I have a martini in the freezer I’ve been trying to get to since Friday evening. Maybe tomorrow after I get back from tribal court doing a termination of parental rights case.

@nojo: On that same note, there’s a “70 members of the House are Socialists” thing going around ( http://gatewaypundit.firstthings.com/2010/08/american-socialists-release-names-of-70-congressional-democrats-in-their-caucus/ ) , citing a source that does not exist – like it matters. Still, here’s something from the hot head end of the spectrum on a gun blog (saysuncle.com) : “Yes, and after the election, they are the first 70 that should be investigated, tried for treason, and sumarialy SHOT. There is no room in the USA for that kind of casual communist crap. BETTER DEAD THAN RED!”

I step in with the rebuttal from the purported original source ( http://www.americansocialistvoter.com/demsocofamerica.htm ), adding: “Not that facts should interfere with keeping the ant pile stirred up and prompting some cheap threats of execution of others exercising their First Amendment (that’s the one before the Second) rights.”

And just think – only a few months till BillO and friends roll out the “War on Christmas” bullshit. Of course, they’ll see absolutely NO RELATION between their insistence that everybody put up with Baby Jeebus everywhere and this mess…

@Cyn: when you put it that way, um, sorry? Just declare it time for tea and throw some blended whiskey in instead.

Apparently, Daddy O may be in my neighborhood Tuesday, not far from my office.

I should scrawl “Where’s the long-form, Obamar” on cardboard, then mill about outside his speech and dinner jus’ for chuckles.

@Nabisco: That’s why I love Mad Men–bars in every office. Ah, the good old days.

@flippin eck: Oooh, baby snow leopards at the OKC Zoo. Maybe they’ll be outside by the time I visit next month. That will give me a reason to go on.

@Mistress Cynica: “Why is this bottle empty?”

@Original Andrew: May Manchu correct me, but there was some kind of kerfluffle about the census in Canada that was gobbling up editorial real estate.

@Mistress Cynica: And cigarettes at all times.
@Mistress Cynica: La Bisqueta picked up a baby harp seal plush toy at the Royal Cunuck Museum that just melted my heart. We never made it to the zoo (but saw the Terra Cotta Warriors, which was totes awesome and hardly any crowd…)

@redmanlaw: I peeked at that story over the weekend. I think the List turned out to be the House Progressive Caucus.

@Nabisco: I seen those guys up in Denver. Did you notice you could tell the grunts from the officers just by looking at their faces? The soldiers’ features were coarser.