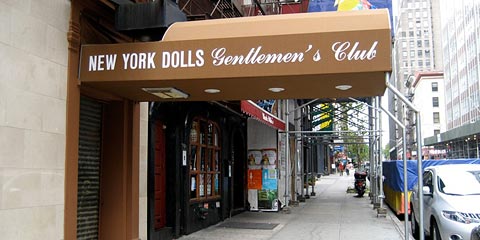 We had this bright idea the other day to browse Google Street View for the area around Ground Zero, noting establishments that, by lack of national outcry, meet the standards for respectable presence. Happily, someone about three thousand miles closer did the footwork for us.

“Nazis don’t have the right to put up a sign next to the Holocaust museum in Washington,” Gingrich insisted, speaking of the museum where just a year ago a guard was killed by a white supremacist trying to enter the building with a gun.

Gingrich then went on to claim that “we would never accept the Japanese putting up a site next to Pearl Harbor.”

No, that last reference isn’t entirely off the wall — there’s a Shinto shrine near Pearl Harbor, and yes, it’s becoming a talking point.

The Japanese paid a pretty high price for the attack on Pearl Harbor.

Um, maybe not. I read part of one of his “alternate” “history” “novels.”

I think the repubelicans are making a huge Terry Schiavo sized mistake with this one.

@ManchuCandidate:
yes
but I am beginning to wonder if he may actually be able to lie and sleaze himself right into the nomination. and I actually think he might be the biggest threat they have.

@Capt Howdy: I was just thinking the same thing about Schiavo. This issue has been absurd from the start, but now it’s going over the top.

the new york dolls are back? i know david johannson is still around and rocking, but i thought another o.d’d and even another got turned out by the mormons. i hope that doesn’t make them sound like donnie osmond.

@Capt Howdy: Salon has an excellent timeline showing how the issue erupted.

@jwmcsame: Yeah. One of them got the Mo. I don’t know if he still has it, though.

@JNOV: the mo must be working for marie osmond these days. i switch over to her weight loss infomercial when the playboy channel shows pictures of hugh hefner.

@jwmcsame: Don’t even get me started on those Chicklet Teefs. Well, I guess it’s too late. Here’s their tribute to “Lamanites.” Check out the funky dance moves.

@jwmcsame: My god! Transvestite punk music on hallowed ground! Right, didn’t they sing about this? What was ‘Jet Boy’ about but the 9/11 hijackers? These people have to go!

@FlyingChainSaw: You don’t hear much from elton motello anymore, but, apparently Plastique Bertrand’s version is the “What I Like About You” of France, I heard it several times in commercials and game shows over there.