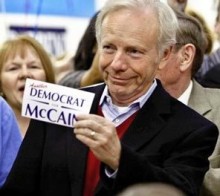 A wiki of dicks. Today’s Dick of the Day – Joe Lieberman:

After publicly stating that George W. Bush’s Iraq invasion was valid (it wasn’t) because Iraq was involved in the 9/11 attacks (they weren’t), Lieberman lost the Connecticut Democratic Party’s 2006 renomination to somebody who actually stood for things Democrats stand for. Lieberman then ran as an “independent Democrat” on the ticket of the dickishly named Connecticut for Lieberman party. After actually winning the election, he made a deal with the Democratic leadership, saying his independent status was a technicality and that he would continue to caucus in the Senate as a Democrat.

What the Democratic leadership failed to take into account is that Joe Lieberman is a dick, and in 2008 he turned on them yet again by endorsing Republican candidate John McCain for President and saying that he would be willing to speak at the 2008 Republican National Convention on McCain’s behalf. If that isn’t dickish enough, Lieberman has even been mentioned as a possible Vice Presidential nominee on McCain’s ticket. He has denied interest in the position, but a “no” from a dick is about as reliable as having Joe Lieberman as your running mate, party member and/or first husband.

Thank you, people of Connecticut, for sending us this backstabbing, self-promoting sociopath.

Steve in Manhattan
1:00 pm • Sunday • August 15, 2010
comment »
Choose Your Delusion
Bugger All Save the Gulf, Buy a Hummer
33 Comments
FlyingChainSaw

I’ll bet he’s a proud member of the ADL, whose stance on the mosque issue is a disgrace to Judaism.

@Dodgerblue: The same reason I always snort when a Fundy uses the phrase “Judeo-Christian” – like they wouldn’t force Jews to convert. And maybe kill them if they didn’t!

I think his appropriate hell would be a room full of mirrors where he would have to listen to his own voice piped in 24-7.

Admittedly, he’d like it at first, but after a while….

Makes me glad I abandoned the Nutmeg State for Lotusland in 1980.

I actually went searching for “Dickipedia” the other day, thinking I might set something up like that. Bastids beat me to it.

@blogenfreude: And the domain name is available.

@blogenfreude: Nah, too late. We’d be an also-ran.

I have to admit, the first time I heard about Dickipedia, I assumed it was the male counterpart to Boobpedia (NSFW)…

I could be critical here, but I am an Illinois voter…….

@nojo: We are so late the ‘pedia game.

Somewhat related, due to the influence of massive numbers of dicks:

Ted Kennedy, Obama, Carter *and* FDR were all somehow worse than MCVEIGH. Seriously?

Actually, I’m surprised that they picked Wilson; I’m sure a few had read somewhere that he was a “progressive”, and that was enough to discredit him. If they’d read more, I’m sure they would have liked him: resegregated the civil service, personally dissed Ho Chi Minh leading to the Vietnam War, etc…

@blogenfreude: As a general rule, any genius idea you have has already been claimed by somebody else.

“Morning Sedition” was an inside joke about How I Came to Blog — and it was months later that I learned it was also an old Air America morning show. I thought “Fear of a Barack Planet” was terribly clever — until I learned someone else thought it terribly clever months previous. And just last week, I congratulated myself on “There’s Something About an Aqua Buddha Man” before discovering that I was hours late to that one.

So, you can’t win. Ever. But you keep on trying, because maybe once, just once, you’ll score the first goal.

@SanFranLefty: Well, um, the Stinque Awards were directly inspired by TPM. I was better at covering my tracks that round.

And, of course, like everybody else, I’m still feeding off the corpse of Spy.

Old comics’ gag: Do you do the John Byner Ed Sullivan, or the Rich Little Ed Sullivan?

@nojo: I think my “sociopaths, the homeschooled, and the clinically insane” is the closest I will ever get.

Footnote to Old Comics’ Gag: The writers of Airplane had some great staccato lines for Robert Stack. But he couldn’t deliver them at first. The writers had to do the John Byner impression of Robert Stack for him to understand.

Where you guys been? Apparently no one clicks my links. I linked to the Dicki entries for Steve Jobs and John Yoo months ago. Or maybe it was on FB. Meh.

@al2o3cr: Wow, I didn’t know about boobpedia. That will cut a few billable hours off my week.

Something here brought out “Online Anger Management Classes” in the not-MSNBC ad. They should just buy a permanent slot.

@Dodgerblue: Neither did I, but I’m learning … did you know there was such a thing as an “O” sized brassiere? Mon dieu!

@JNOV: It only counts when you are have one.

@nojo:
Really? I got an ad for Sushi Restaurants in Toronto.

Then when I clicked on the post, I get an ad for stupid fat white people, er, um teabagger ad.

@Walking Still: That one we hit right. Even got a shout-out from io9 when it launched.

@Walking Still and nojo: Job is my favorite.