Noob Court is Now in Session 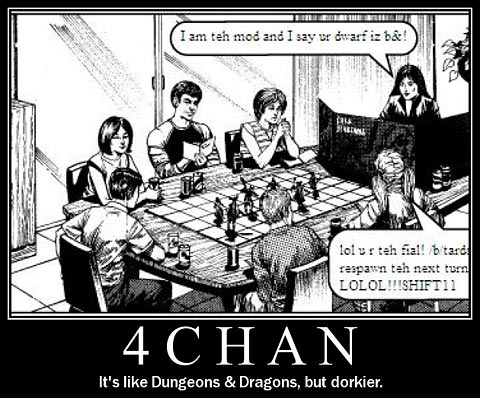 Our afternoon guest columnists are A Lawyer and übergeek website 4chan founder Moot, performing in colloquy.

Q. Is there a certain language that is commonly used for users of 4chan?

A. In what sense?

Q. Certain terms have a meaning unique to 4chan?

Q. Are you familiar with these terms, having been the founder and administrator of the 4chan site?

Q. What would “lurker” mean?

A. Somebody who browses but does not post, does not contribute.

Q. And is there any significance to “new fags”?

A. That is the term used to describe new users to the site.

A. It’s a term that users of the /b/ random board use for themselves.

Q. Not found on where, the 4chan site?

A. 404 is the http status code for not found, a page not found by the Web server.

A. Rickroll is a meme or Internet kind of trend that started on 4chan where users — it’s basically a bait and switch. Users link you to a video of Rick Astley performing Never Gonna Give You Up.

Q. And the term “rickroll”, you said it tries to make people go to a site where they think it is going to be one thing, but it is a video of Rick Astley, is that right?

Q. He was some kind of singer?

I wonder if they’ll trot out the Faux News “exploding van” footage.

Court: On what grounds, counselor?

Atty 1: Rick Astley is not a joke, Your Honor. He is a dead fucking serious artist.

Atty 2: But his acid washed jeans are almost certainly a joke, Your Honor.

@JNOV: Aluminum, oxygen and chromium. I looked it up at one point out of curiosity, I forget now what the compound is called or used for.

@JNOV: More properly, “Ruby” is a scripting language, like PHP. Ride the Rails!

@nojo: Man, I am a total script kiddie. You know this.

@JNOV: I think you’re referring to TinyMCE, a popular Word-like text editor for websites. It does a lot of javascript voodoo under the hood.

PHP is the server-based language that runs WordPress, Facebook, and probably most of what you visit on the Web. Except Google, which lurves Python.

Fucking servers. How do they work?

ADD: If I start reading about TinyMCE (tiny mice!), you’re totally on my list.

@redmanlaw: Ho! Ho! HO! I’ll read it for Nick Fury alone! Thanks! Oh, and if you’re talking about my class, I can only supplement readings with stuff past copy right. Boo! But the readings are pretty interesting. We’ve got some cases, The Dec of Ind, and I’m going to add the Const. I’m sure they’ll love that.