Stinque
Home Latest Comments Log in
If it smells, we’re on it.
Stinque
Mastodon: @stinque@mas.to
Carpocalypse

First They Came For Our Parking Spaces, And We Said Nothing 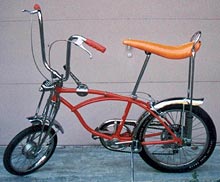 We’re starting to think that Sarah Palin’s bendy straws are a metaphor for our polity:

“This is all very well-disguised, but it will be exposed,” Maes told about 50 supporters who showed up at a campaign rally last week in Centennial.

Maes said in a later interview that he once thought the mayor’s efforts to promote cycling and other environmental initiatives were harmless and well-meaning. Now he realizes “that’s exactly the attitude they want you to have.”

Mass transit and shared biking (in fact, any method of alternative commuting) are the socialisms; roads, paid for by everyone and used by everyone, are not, apparently.

When I read ‘United Nations community”, my first thought is this is verbiage with no content. Then I start hearing voices singing “It’s a Small World After All” and getting flashbacks of my one exposure to the land of Disney.

Thanks Maes. I know where you can put your banana seat.

This is just another variant of the classic “NWO / Compact Cities” meme that’s been circulating around the batshit-crazy RW circles for years.

anything that includes “its what they want you to think” should pitch up giant red flags.

@Capt Howdy: There was a potentially better quote that immediately followed, but that’s the point I started giggling like a madman.

Might have had something to do with hearing it in Robert Stack’s voice.

so, if you have more than twice as much money as you could ever spend how personally significant an act is it to give away half of it?

dogs
what can you say about dogs but thank you god

Um. So here are the facts as they’ve been reported. Dog-owner Jerry Douthett had a seriously infected big toe and was ignoring medical treatment. Earlier this week, he and his wife went out to celebrate her new status as an American citizen; Douthett had too much to drink, came home and passed out in bed. He awoke to find blood-stained sheets because his dog Kiko HAD EATEN HIS INFECTED TOE. Turns out, had the dog not eaten the bad toe, the infection may have killed Douthett. Good Doggie!

@Capt Howdy: Right and they say the poor don’t get health care in America. Case closed.