But If She Does Run, Grab Some Popcorn 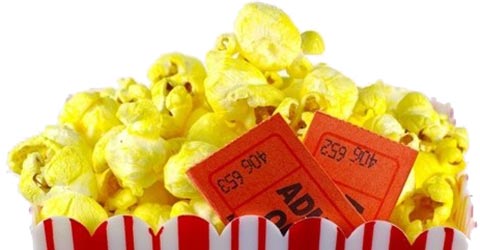 We stand by our judgment that Sarah Palin is only maintaining a pretense of running for President in order to keep her speaking fees and bendy straws flowing. We say this despite the fact that we would really, really, really enjoy such a development:

In possibly the first inter-staff dust-up of the 2012 presidential race, an aide of Sarah Palin is hitting back at Mitt Romney’s camp for saying the former Alaska governor is “not a serious human being.”

A “Romney intimate” was quoted by “Time” magazine’s Mark Halperin in a Thursday column as saying that Palin could not withstand the rigors of a presidential campaign.

“If she’s standing up there in a debate and the answers are more than 15 seconds long, she’s in trouble,” the Romney intimate said.

An additional Romney adviser was quoted as saying the former Massachusetts governor’s team is not intimidated by a possible Palin run. “She’s not a serious human being,” the adviser said.

Asked about the comments by POLITICO, a longtime Palin aide unloaded on Romney’s staff.

“It shocks me that anyone would try to do that,” the aide said. “You’d think we’d all be working together toward a common goal — that being 2010 — and that should be the focus right now. Those who try to claim the mantle of Reagan would be good to follow one of his most sacred tenets.”

Of course, Saint Ronnie’s Eleventh Commandment didn’t keep him from running against a sitting Republican President.

The fundraising, the Mama Grizzlies, Bristol’s reunion with Levi—it all points to a Palin presidential run in 2012. But she isn’t ready—and a loss could be disastrous for the GOP.

@Capt Howdy: Lost in the incessant Reagan comparisons is that he was a two-term governor of California and a strong primary contender before he ran and won in 1980. Anyone who didn’t see it coming had blinders on.

Including me. But I was under drinking age.

do we really think, as HuffPo says that the pubelicans can get the hispanics to vote against their own interest just by putting up a candidate who speaks their language as they did with uneducated white crackers?

Not really a TJ: Bristol’s ex lashes back at her and Levi, says that TrackSuit Palin (the one shipped off to Iraq instead of prison) called Bristol “two four-letter words”

Oooooh, that eliminates whore and bitch (unless he is unaware of the silent w on whore).
Options:
twat
shit
slut
cunt

Here’s some fun, there’s a better one at ebaumsworld, but I can’t go there at work: http://94wysp.radio.com/mel-gibson-soundboard/

@Capt Howdy: My, what a torrent of bullshit this week! Halperin, Politico and HuffPo are really stepping up!

Here’s the thing: Republicans were making a strong play for Latinos during Shrub’s reign, and blew it all by catering to nativists.

Q: How many times in that long story does “Arizona” appear?

A. Trick question! None!

@SanFranLefty: Who had the line about the doublewide outside the Naval Observatory? Was it Jamie?

@TJ/ Jamie Sommers /TJ: This has come up before, and now that I think about it, it may have been Cynica who rapped me on the knuckles for forgetting the source.

@nojo:
if Jebbie runs this should be the official Dem theme music for 2012

She must belong to San Francisco
She must’ve lost her way
Posting a poster of Poncho and Cisco one California day
She says she believes in Robin Hood and brotherhood
And colors of green and grey
And all you can do is laugh at her
Doesn’t anybody know how to pray?

Arizona, take off your rainbow shades
Arizona, have another look at the world, my, my
Arizona, cut off your Indian braids
Arizona, hey won’t you go my way?
Mmm, Strip off your pride
You’re acting like a teeny-bopper run away child
And scrape off the paint from the face of a little town saint

Arizona, take off your hobo shoes
Arizona, hey won’t you go my way?

Follow me up to San Francisco
I will be guide, your way
I’ll be the Count of Monte Cristo
You’ll be the Countess May
And you can believe in Robin Hood and brotherhood
And rolling the ball in the hay
And I will be reading you an Aesop’s fable
Anything to make you stay

Inspired by the alt-text

She’s got a ticket to run…

I think she’s gotta be mad…

I think the Republican strategists are working based on their stereotype of a typical Hispanic voter: lots of kids, frequent churchgoer, Jesus candles everywhere. They’re (I suspect) hoping to play both the “we hate us some gheyz too, praise Jeebus” and the “illegal immigrants from Central America tuk yer jahbs!” cards. Unfortunately for them, they may discover that there’s quite a bit more variation in that population than was mentioned in Rove’s copy of “Brown People For Crackers”… :)

@Mistress Cynica: I am going to start copyrighting mine too, darling. You and I are an unrecognized and under-appreciated source of funny on this site.

You are the perfect woman, you know that?

@Walking Still: Manchu has some competition, I see…

Go see Inception. Now. I will tell you nothing more.

@Tommmcat Still Gets Carly Confused With Meg: We can be the Goffin and King of Stinque. I’ve been doing these for years at work.