So it’s come to this. The moment for which you’ve worked your whole life.  You’re representing your country at the World Cup, have exceeded expectations for your team and survived to the elimination round of 16. Your team battles a better South American team to a nil-nil tie after regular time, and play an additional 30 minutes.  Still nil-nil, so the only way to settle the game is with penalty kicks.

The other team goes first. They score on your goalie. Your teammate takes a kick and scores on their goalie. And so it goes until the bottom of the third set when it’s your turn.

You’re a defensive player, and you’ve never scored a goal in your career but your coach told you to go take the shot. You line up the ball. You ask the spirit of your grandparents to watch over you. And then you take the shot…

…and you hit the crossbar and the ball doesn’t go in. Your team loses because of your missed shot.

Yuichi Komano of Japan, come on down because you are the Stinque World Cup Hottie of the Day!

C’mon, we have to give him the honor.  Running more pictures of Cristiano Ronaldo would have been too predictable. 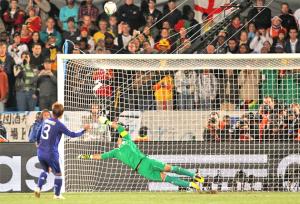 And another view of him after the miss: 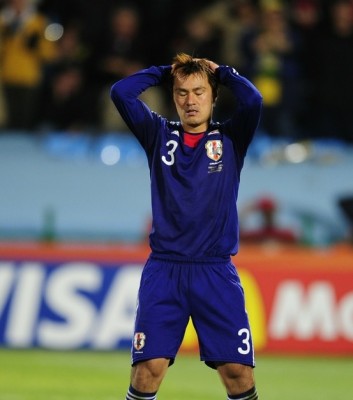 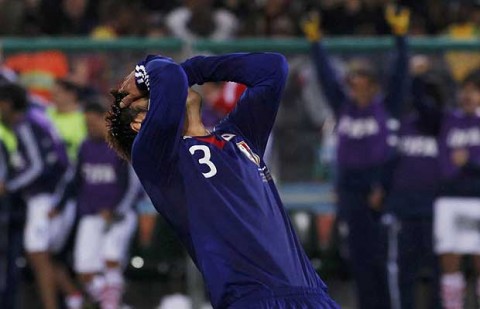 Picture from another game. Dude has some crazy hair going on: 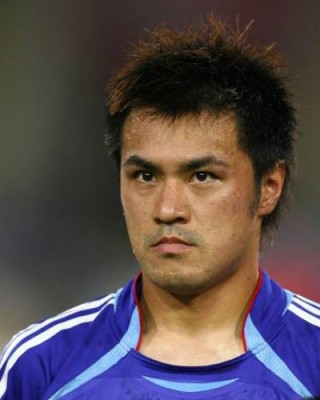 Lefty loves me, I can tell.

I’ll bet he has hairy legs but is smooth everywhere else. Yum.

Think he is uncircumcised? The native born ones usually are.

Poor guy. I feel really, really bad for him.

I will comfort him. Do you have his number?

TJ/ Back to The World of Dating Hell

GDotBwtB called. I let it go to voicemail until I had time to grab a drink and head outside to smoke (I smoke while on the phone — don’t know why). But wait! GDotBwtB switches it up and doesn’t leave a message. Rather than bore you with more dialogue, let’s just say I’m bringing my guitars to the store tomorrow despite his disbelief of my disbelief. “You’re an atheist? An atheist?” (I figured I see how his gospel playing butt reacted to that information.) He’s also in a blues band that plays by the waterfront, so I might check him out there some time. He also plays on some river cruise jazz boat thing, so maybe I can get some swag.

So, tomorrow — new string(s) for the acoustic and we have a three-hour window where we can hang out in the store. I’m totally bringing my SG clone and plugging it into a Fender Twin when I’m there. Oh, and he likes STP. Heh.

He’s our type, Tomm. Looks like he’s got the itchy facial hair thing going on, but otherwise, smoooooooth.

@Tommmcat Still Gets Carly Confused With Meg: Yeah. I think he thinks that I want to be wined and dined. Instead I’m going to show him more of the city being that we live in a cultural wasteland out here in the ‘burbs. Maaaaaybe dinner on Thursday. We’ll see. I need to do something about his hair, too.

@Tommmcat Still Gets Carly Confused With Meg: Love almond-shaped eyes. Wish I had them. You can see the outline of his junk in the third picture.

@Tommmcat Still Gets Carly Confused With Meg: He does have crazy brows. We could play through that.

@Tommmcat Still Gets Carly Confused With Meg: Oh, here’s one for you us…

Oh, wait — were you asking if GDwtBotB has almond-shaped eyes?

@Tommmcat Still Gets Carly Confused With Meg: He’s not a very prominent player (until now), I didn’t find ass shots or shirtless shots on the tubez. If you do, then you have a different Google setting than I. You know that if I had the beefcake (would it be un-PC to say “ricecake”?) I’d show it for you.

Scroll down to the 2d picture on this post.

@TJ/ Jamie Sommers /TJ: I thank you! He kept pushing the dress up business, what’s my favorite restaurant, etc., and I asked him if he had $200 to blow on dinner. Hellllllllo!

ADD: I wonder if anyone gets confused and whacks off in that thing. Dumbasses.

@Tommmcat Still Gets Carly Confused With Meg: Have a butt shot on me.

@JNOV: See if he has a blackface Twin in the store. That would be early ’60s, before CBS bought Fender. Turn it up loud until you get into the sweet spot. Ain’t nothing like it for tone.

@Tommmcat Still Gets Carly Confused With Meg: D’oh! I’m not sure — he wears glasses, and we’ve been sitting side-by-side on the bus. All I know is he’s tall, lean, and not very hairy. I guess that’s why he’s clinging to what’s left on his head. That’s okay — I’ve got clippers. That ear warmers mini fro isn’t long for this world. Oh, and I suspect his voicemail greeting will be more intelligible tomorrow.

@SanFranLefty: It is Un-PC, very, but hey, all friends here, right? Though a true rice queen uses the term “moon cookie” or “Bishonen-boy” , which are WAY worse, and for which I have been scolded for using the the past.

Don’t type “bishonen” into your browser, by the way. They look disturbingly young, which may be why it pisses your average gayzian off.

None of which has anything to do with how much I appreciate the eye candy. Thanks love.

Bald can be sexy. You have to tell us how this whole thing goes…

@Tommmcat Still Gets Carly Confused With Meg: Yeah, I have no problem with bald. Genes, that’s all it is.

Q: What do you call a musician without a girlfriend?

@JNOV: All I know is he’s tall, lean, and not very hairy. I guess that’s why he’s clinging to what’s left on his head. That’s okay — I’ve got clippers

yes, yes – introduce him to the clippers. Liberate his inner Tim Howard (returning to Sport theme)!

@Nabisco: I dunno. Benedick has a point…

Meh. I’m going to meet him around two, and if he’s douchey, I can just leave.

@Tommmcat Still Gets Carly Confused With Meg: I’ll let you know — meeting him around 2, and he has classes at 5, so the most important thing, an escape route, has been planned. Other preparations — I think he’s only seen me with my hair up, wearing glasses and looking pretty damned greasy from walking around the city. So, the plan is:

1. Hair down, defrizzed, etc.
2. Contacts
3. Mascara
4. Maybe a bronzer to tamp down the schwettyness some, BUT I’m pretty tan already, so…maybe not
5. Mos def t-shirt and jeans
6. Birks for the helluvit
7. A wee bit of parfum (Bulgari)

@Tommmcat Still Gets Carly Confused With Meg: You wouldn’t happen to like Wentworth Miller, hmmmm?