How do you say “Hissy Fit” in Latin? 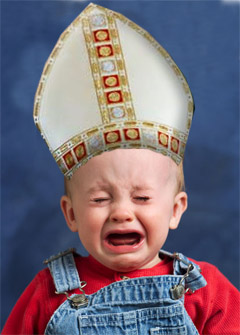 Uh, oh… the Pope is pissed. Seems someone in Belgian law enforcement didn’t get the message that the Catholic Church is above the law, and decided to conduct a raid of church offices in a wholly unwarranted investigation into the trivial misdemeanor (is it even a crime?) of child rape:

ROME — In a sign of sharply rising tensions between the Vatican and Belgium, Pope Benedict XVI on Sunday criticized as “surprising and deplorable” a raid on church property last week by Belgian police investigating sex abuse by clerics.

In an exceedingly rare personal message and rebuke of a sovereign country, the pontiff also stressed the church’s “autonomy” to conduct its own investigations and criticized the “deplorable methods” of Belgian police who last week detained bishops, confiscated files and even drilled into the tombs of at least one cardinal in the Brussels cathedral in a search for documents.

“On several occasions I have personally reiterated that such serious issues should be attended to by both civil and canon law, with respect for their reciprocal specificity and autonomy,” Benedict said in a statement circulated by the Vatican on Sunday.

The Pope is right, of course. How is the church supposed to conduct an internal investigation/coverup of the Catholic hierarchy’s complicity in shielding child rapists if it simultaneously has to contend with the nuisance of a criminal investigation by unqualified laymen who probably have never written a sermon in Latin in their whole lives?

On Saturday, the Vatican secretary of state, Cardinal Tarcisio Bertone, called the detention of bishops “serious and unbelievable” and compared the police tactics to those of Communist regimes. He also said that the bishops had been deprived of food and water during their detention.

In his message on Sunday, Benedict said he hoped that “justice will run its course,” guaranteeing “the fundamental rights of people and institutions” and “the respect for victims.”

And by victims, of course, we mean the poor Bishops, Cardinals and Priests who have been deprived of their God given right to have these matters resolved in the secrecy of the parallel shadow legal system of Sharia Law Canon Law, the better to shield the Church from the scurrilous accusations of those who simply wouldn’t understand.

In what other organization would this level of management complicity in child sexual abuse not land the entire executive suite in jail? Is this really what Jesus had in mind?

@Dodgerblue: In what other organization would this level of management complicity in child sexual abuse not land the entire executive suite in jail?
The GOP.

@blogenfreude: I thought they preferred teenage pages. That’s too old for the priestly child-diddlers.

This should have happened long ago.

@Dodgerblue: Dante needs to create a new ring of fire.

@Dodgerblue: precise communication, very precise, is all they really teach us in law school. There was no complicity in sex abuse.

There was recklessness and negligence to it when it occurred.

The Church’s sins were:

Failure to report known instances of abuse to the authorities, and encouraging and coercing victims not to report. The vast majority of this occurred before there were laws mandating the reporting of abuse against children.

The policy of not simply firing priests who were known abusers. To me the jury is out on whether they simply did not care that these people were going to do it again, or naively beleived that the course of spiritual counseling, psychiactric treatment, and stern admonitions to sin no more, would change the abusers, and they would reform. They did do all these things.

I have worked on a case against a diocese. I have read the internal memoranda of high level church officials and their deliberations and decisions about what to do about several priests they knew had abused children. These priests were removed from duties, sent into retreat, I don’t know what the “spiritual counseling” was, but I get the impression that they laid on the moral teachings, “its wrong, its a sin, you must renounce sin,” re-emphasizing the vow of chastity, its a church, after all, their mission is to encourage adherence to moral rules, and thats what this “spiritual counseling” means, simply trying to exhort these predators to reform.

But that was not all, they also sent them to credentialed, real, MD psychiatrists, for inpatient “treatment,” before they would re-assign them to another parish. Now, again, you could claim, as some have, that this was cynical window-dressing, but I am convinced from reading the files, that it was not so. This was all in the wake of Vatican II and there were a lot of “liberals” in the church, and I think they genuinely believed that it could be treated as a medical issue, the perpetrators were mentally ill, and needed treatment.

Not that insane an idea, what enormous percentage of people in our jails are either mentally deficient, or actually suffering from a severe mental disorder? We have criminalized insanity in the US.

The personnel files on the perps were detailed, and cold-blooded, scientific, even, many references to psychiatric reports. These were very intelligent people, their level of sophistication was amazing. But in the end, they would, after the priest had been going through the counseling and treatment, for a year or so, re-assign them. And yes, it would happen again, and they would do it all over again.

I genuinely believe that a large part of it was desperation over an absolute collapse in the numbers of people entering the priesthood over these same years.

But this is a coverup situation, not complicity in the abuse.

Here is something that the vast majority of people in our society are completely unaware of. Under Catholic doctrine, sexual sins are not considered a big deal. They are venial, not mortal, sins. Giving in to sinful urges that everyone has, is considered a sin of weakness, not deliberate badness. Hate, violence (both are sins, not just the act of violence against someone, but harboring the hate that gives rise to the desire to do violence, these are equal sins) and doctrinal sins, failures to believe and adhere to doctrine, are considered far far worse sins.

Hillary even mentioned this during the Monica coup attempt, and was ridiculed for it.

The flip side of “Catholic guilt,” the doctrinal assumption that everyone is a sinner, and cannot help it, is that everyone gets a pass, you sinned, oh well, everyone does, you have to try harder, and you are forgiven as long as you are sincerely trying. Catholicism is not a puritannical faith, there is no shortage of bordellos in the Catholic countries. The church sets a high goal of morality, but readily forgives lapses, in the area of the animal appetites, flaws and weaknesses are presumed as part of the human condition. The greatest bacchanals taking place on earth today all take place in Catholic regions, all the Mardi Gras celebrations, what orgies of sex, drunkeness, music, partying, these mardi-gras celebrations are. These are Catholic festivals, they openly and loudly proclaim the idea that, well, lent is coming, I have to be good for a month and a half, I better have a big blowout now and get it out of my system, while I can. Then I can be all virtuous for 6 weeks, about as long as I can stand, and I will be in good standing again.

@Promnight: I think that’s the most logical and well reasoned defense of the church’s actions I’ve ever read. I mean that sincerely.

@Promnight: Well done, very interesting read. I’m sure I’ve mentioned this before but it has seemed to me throughout that a large part of the problem has been that the church’s attitude towards the guilty priests was caused by its adherence to the doctrine of donatism which invests moral authority in the body of the church and not in the priest. It’s a crucial distinction that took a couple of centuries of quite brutal suppression for the Vatican to stifle the idea that the priest himself carried moral authority (hello, Protestantism!) and having fought that fight I should think that the church cannot now ignore its own precepts. As I understand it the church must give the priest the opportunity to repent and reform himself. They have no other option if they are to stay true to their own belief. In those circumstances it’s not surprising that the victims become annoyances to be silenced as quickly as possible. Not to say that’s a good thing only that it’s kind of inevitable.

This is not a topic that can be discussed in polite circles right now but I’m wondering what percentage of these cases are the result of a panic spread by news reports not unlike the day-care panic of the 80s. S.N.A.P. certainly gives the impression of vigilantism and I find it startling that the only priest (I think he is still, if not the only then the first) to actually go to jail is fr. Shanley in Boston who was convicted via recovered memory and is clearly innocent of the crime that sent him to prison.

The church in Catholic countries has always suggested to me what the established pagan religions, particularly of Rome, might have been like. Praying to Diana must have a lot like praying to the BVM.