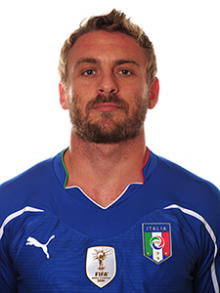 In today’s World Cup action, the returning champions Italy – who in my opinion never should have been in the 2006 finals – were sent packing back to Rome after losing to Slovakia by a score of 3-2.

This means we won’t have the smoldering Italians like nekkid Fabio Cannarvo to feast our eyes on anymore.

Nor will we have another hot Italian mess, Daniel DeRossi, who is mercurial in attitude and likes to take his clothes off on the field. And I’m not talking about his jersey, either.  And so he’s today’s World Cup Hottie of the Day. I’m not a big fan of straggly facial hair, but it has its place.

He is one of the up-and-coming players for the aging Italian team, and viewed as a future captain of the national team. He plays for Roma in the Italian premier league. He scored one of Italy’s few goals, in their game against Paraguay. 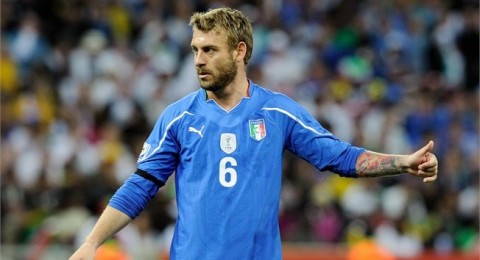 He’s a player who alternates between hot-headed temper tantrums on the field and displays of sportsmanship. To wit:

He also has a tendency to start taking his clothes off after games. Here he is celebrating after a 2009 club game against Lazio: 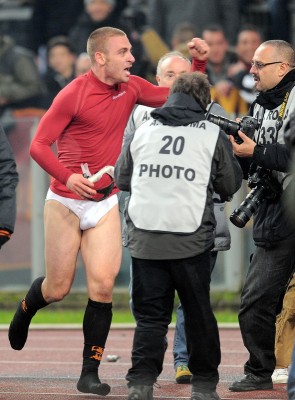 Well, they can’t all be hairless, I guess.

What, the Elbonians were too Neanderthal for ya, Lefty? Cause they pretty much are, is all.

@Tommmcat Still Gets Carly Confused With Meg: His upper thighs look pretty hair-free to me. But then again in that photo I’m not focusing on his face.

So that’s why I heard crying and wailing today all over Toronto.

@Tommmcat Still Gets Carly Confused With Meg: It’s my turn to ogle, hon.

@SanFranLefty: From the depths of my heart, I thank you for today’s edition.

@rptrcub: Oh Cubbie, so glad my lover-of-bears showed up to see this. I do what I can. You know you can nominate Hotties at any time, amirite? Too many of these soccer players are so waxed, which makes Tommie happy, but I want to make you happy too.

these posts are the only saving grace of this whole world cup thing.

Here’s a “Men in Uniform” thing for you guys.

@redmanlaw: I expected Gang of Four.

@Nabisco: They could call a couple of friends.

That’s a position from the Ammo Sutra.

@Original Andrew: The crack of gunfire . . .