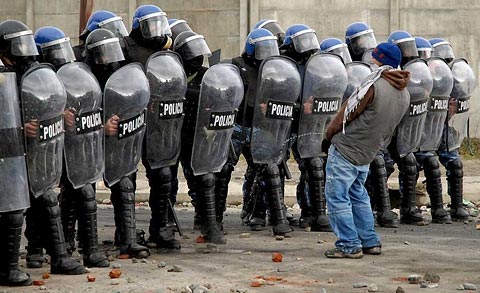 Protest in Argentina [MSNBC, via PourMeCoffee]

He looks young — he should be getting better distance.

@Dodgerblue: Why do references to the Who keep coming up?

Although the after pic for this may very well have involved bloody nightsticks.

Wonder if this guy has one of these on his pickup truck Peeing Calvin.

It’s a preview of the upcoming G20/G8 summit in Toronto suburb of Canada City.

The “wisest”, “most generous”, “least corrupt” and “not” jealous of Obama PM Fatty has decided to move this from the quiet goober town of Huntsville (some 2 hours NORTH of Toronto, isolated and away from the major population center) to Toronto during one of the busiest weekends of the year (first weekend of summer as kids get out of school this week.)

I’m almost sure that he did for the fact he hates Toronto as of the 40 or so parliament seats within the city, his party has a whopping total of zero.

Anyway, no one is happy about the cost, the disruption of a good weekend or the fact that the Toronto Blue Jays have to play “home” games in Phillie.

meatloaf, as in bat out of hell meatloaf, yes, that one, rang the opening bell this morning…to promote his new CD.
lines on hookers asses for everyone!

@baked: Getting too old, ya gotta take care of your heart at this age, last thing I need is to have an infarction doing blow off a hookers ass.

However, in a similar, drug-nostalgia vein, I do hear that ‘ludes are totally back, in city hipster circles, and thats sounding attractive, “ludes are the go to, when what you want is serious fucked-upedness.

@Prommie:
personally? i can’t think of many better ways to die. add vodka and the sound of music soundtrack and i’m good to go. i do not want to die in bed. unless it’s a shtupping mishap. did i ever tell you, in addition to class clown and best dressed, i was voted “most likely to be murdered?” i’m proud of that one. i want to punch bite kick strangle the smug off tony “antoinette” hayward’s face. wtf was he doing yacht racing on sunday? ooh, if only. yep, i’d die that way. but i’m so full of rage i would probably kick the shit out of his henchmen too.
re ludes. i hear the same rumblings. i’ve yet to see one, ergo, not true.
you want to get seriously fucked up prommie? fiorocet. take 4 and say ba bye ! every trip to miami includes a stop at dr. feelgood.

@Benedick:
good morning mum ! i’m only smoking pot all day. promise.
one must take the edge off of me, or else 4 point restraints are in order.
going out in the garden now to skip about and sing ‘my favorite things’ to the outdoor cats. they love the whiskers on kittens part.

i’ve mentioned this before. the details are unimportant. the fact is, i squirmed out of 4 point-leather-restraints at bryn mawr hospital. that’s when they posted a series of large gorilla-like women to bar the door. now they are not to be fucked with i learned very quickly. stoic too. ex-prison guards no doubt.

I just came across the most charming piece of information! It concerns our dear friends and allies, the Saudis. I’ve known forever that they have these wonderfully quaint traditions, such as chopping off people’s heads for such evil crimes as proselytizing, or adultery, but I didn’t know they still do crucifictions!

Really, it just makes me even more proud to know that our dear President Bush so often kissed and strolled hand in hand with the corrupt, greedy, decadent, bloodthirsty tyrants that rule this land of savages.

The conservatives, they are always harping on the bugaboo of liberal “cultural relativism.” Well, I am liberal, and I am not buying that shit, I think some cultures are superior, and some inferior. People in general all suck, this is a given, but some groups of people have developed some shared values and traditions that to some degree lessen the suckitude. We US Amurricans used to have some shared values, like honesty and integrity and charity, but we chucked all those in favor of naked greed as the foremost value years ago. Yet we are still better than those fucking savages in Saudi Arabia.

At least for now, let the fucking evangelical bornagains take over here, and there would be public stonings of non-believers in no time. They’re really the same thing, fundamentalists of every religion or creed.

@baked: Did you know your security video is online now?

@baked: Here’s what I’ve been singing:

Ooohh, there’s maybe some dire doings a-transpirin’ right nearby, over at Lakehurst: http://www.msnbc.msn.com/id/37827178/ns/us_news-security/?from=ET

@Prommie: If it’s any consolation, it seems the man was beheaded and then his body was nailed to a cross (WTF?). They didn’t crucify him while alive. Another aspect of the same shite is the number of men who are executed in Iran for being gay. There’s a refugee railroad to get people out but many are still put to death.

Just got back from the gym, bitchez! Ya! Shifted some pretty sick iron.

@Prommie:
i’m babbling today because i’m SICK prom, sick about it all. we must laugh, the mel brooks coping strategy.
joy behar is jumping up and down on the view table about tony racing his yacht on sunday. she wants him in JAIL. i want him tortured like a sea turtle. and i have a framed pic of bush holding hands with that saudi missing link. what are we gonna do?
bitch, laugh, bitch, laugh, bitch, laugh.

@baked: Is my memory correct, I seem to recall that the Saudis give thousands of dollars to the families of every palestinian suicide bomber? Of course, Saudis also planned, funded, and carried out the attacks on 9-11, so that is small potatoes, but still. And it seems to be illegal in the US to say these things. They are our “friends.” Fat, decadent, greedy, corrupt tyrannical degraded theocratic bloodthirsty shitbag friends.

@Benedick:
what are you doing in the gym? you can hurt yourself! the last time my dad went into a gym he burst a spleen and was in a coma in new york hospital for a month where his wife/beard beat me up in the lobby…..
i think he joined just to be naked with his “friends” at the friars club.

we often neglect to remember that adolf was throwing gay asses into the ovens too.

@redmanlaw:
HAHAHA LOVE. IT.
damn i love a feisty girl. she is AWEsome.

i ended up in the restraints because i kept trying to escape. alas, i’m no sarah conner…the bastards got me with one good smack on the back of my head with a plastic food tray. damn!

Ha! I had the dubious honor of being part of the sound/light crew for this (second part). Before that show, we actually had a local cop asking around to see if there was going to be a “human sacrifice” that night. Totally crazy.

In related “ick factor” newz, Huck thinks gheys are “icky”. Well, I think letting conservatives breed is “icky” – can I haz marriage legislation against *that*?

@Prommie: Well, technically it wasn’t a crucifixion — he had his head chopped off before being nailed up.

In order to be a crucifixion you have to be nailed on while you’re alive and left to die there slowly.

And please don’t condemn all Saudis for this. I spent four months wandering a bit of the countryside in Saudi Arabia in 1977 and can testify that they are not savages.

The Saudis put to death two murderers. The Israelis murdered how many people in cold blood in their recent act of high-seas piracy?

@baked: I’ve decided I need to get back my gym god body and get like sick shredded, yo. I’ma loose on da juice.

I’m icky? Does he have a mirror?

“I got your ‘nightstick’ right here, coppers.”

ADD: Guy on the receiving end: “Lord Vader told me there would be days like this.”

@al2o3cr: Well, at least he’s honest. None of that John McCain I’m-running-for-president-so-I’m-going-to-pretend-to-tolerate-you-people (gays, Hispanics, whatevs) nonsense for him.

@karen marie: Many individual savages are fine people; its the culture I condemn. You know, monarchy, a hereditary (ig)nobility, bigotry, racism, religious intolerance, polygamy, women being property, anti-semitism, amongs being anti-everyone else who isn’t a muslim as well, beheadings are the least of it, just the most viscerally repugnant.

@Prommie: My objection is to lumping all Saudis into that caricature. I met many Saudis (not in the upper classes) who were none of those things. Don’t mistake the ruling class for your average Saudi.

I call shoppe on that image; look at the white key line around the front of the jeans.

@Tommmcat Still Gets Carly Confused With Meg: You’ll have to file your claim against the MSNBC original. I shrunk it and added slight sharpening (0.5 unsharp mask for Photoshop jocks), which brings out the edges.

There are shadows from both directions.

ADD: The kid is not reflected in the police shields.

ADD ADD: None of the police are looking directly at the kid who is pissing on them.

@Tommmcat Still Gets Carly Confused With Meg: Leave us some illusions.

@Prommie:
that is my line of the day.
“many individual savages are fine people”
;-P

@Tommmcat Still Gets Carly Confused With Meg: That’s between you and Reuters.

Reuters my ass. The puddle of urine is interpolating into that one dude’s shoe.

Nah. Those are beige pants. The kid is wearing jeans, and besides, no stream.

@Prom: but how awesome would it be to go around commando all day in one of those dresses they wear, huh? Think positive, man.

*I walked five minutes to work then swam a bit afterwards.

@Nabisco: You gym god you. I woulda never known, you are a skinny thing. But then, its all leverage and body awareness. I had a 1980 Honda Civic in college, one time I parked kinda slanted in a parking space, and as I was walking away, I thought that out of consideration for the people on either side of me I should straighten the car out, so I walked back, picked up the back of the car by the rear bumper, and moved it over a couple of feet so it was aligned correctly.

@Promnight: I remain, as always, a “skinny thing”. The most I can deadlift is my office chair when it gets hung up on the carpet. Although I’ll tell you a story sometime that involves me, my neighbor in a foreign country, and a coupla tons of sandstone that crushed him to death – instead of me. Srsly.