By the time this is posted, the US v. England game will be half over. (Confession: This was put in the can 12 hours in advance, just like at newspapers).

So by the time you’re reading this, today’s World Cup Hottie of the Day could be the biggest hero of the U!S!A!

I present to you, Tim Howard, the starting goalie of the U.S. national team.

Why the goalie? Why not hottie-pants U.S. ‘Merikan Landon Donovan for Day 2?

Because goalie is the most thankless yet crucial position in a soccer game, and Howard has proven his skills time and time again (no comment on the 11 am PDT/2 pm PDT game underway that I am not watching and that occurred after I wrote this post) and he has overcome a childhood as the picked-upon kid in Jersey – biracial child of an Eastern European immigrant and black father; who does not medicate his Tourette’s and has channeled his energy into goalie, including emerging in the British soccer leagues.

He’s not as simply hot as some of the other World Cup Hotties, but he’s hot in a different way for his mad ball-handling skills, holding the team together, and barking out commands from the back of the pitch.

And another action shot, hopefully the ball will not be going by him like this: 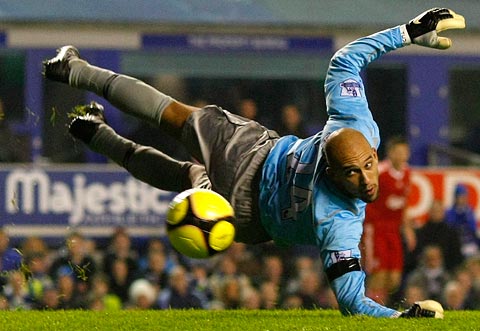 Sadly, goalies don’t take their jerseys off that often so I couldn’t find a pick of him shirtless. But you *know* he’s going to have a six pack to rival Ronaldo under that shirt.

Classy yet pretty post, Lefty–thanks! I think there are several examples, Pres. Barry not the least of which, that biracial kids don’t necessarily have an easy time of it, but gain a ton in character and patience because of their experiences….and they’re nearly always beautiful to boot. I’ve lingered on Tim’s lovely toffee/hazel eyes in the pic above for a few minutes now…

3. Overheard on a blog roll in the run up to my 23:55 start time: And James Milner of Aston Villa on to man-mark Donovan — Milner had a stomach bug in recent days, but he must be over it. Let’s hope he doesn’t lose his tiffin on the pitch!

And now for something completely different.

@Nabisco: We Left Coast Stinquers have a difficult time figuring out the 24-hour post clock, especially since it’s set to East Coast time.

But what the heck. Here’s yer open thread for the game match.

@Dodgerblue: That is a beautiful thing. I see an Aphrodite Ripple in there somewhere, gimme a sec.

@nojo: Noted. Mind you, I’m about to try and stay up way past midnight, watching 90 minutes of soccer, just because I sincerely hope to see someone lose their tiffin on the pitch.

Hey, the British anthem sounds just like our other anthem, how quaint!

@Nabisco: God save the queens.

@Nabisco: And they brought out the Devolution Jack flag!

Is this a good time to ask if anyone saw “That Damn United”? Great flic.

Please ignore the Giant Alien Spaceship hovering above the stadium.

Well, that was fun. Still time for cartoons?

@Nabisco: Little does England know, but we’ve filled the Gatorade barrel with BP oil for the celebratory dunk.

Pub Noise Report: Can’t hear anything over midday freeway and airport traffic. It’s those 5 a.m. matches that wake you up.

Tim’s tourette’s is acting up, but the announcers are too polite to point it out.

I’ve been thinking of George Will’s classic dis of (American) football as “violence punctuated by committee meetings”. Really, what’s wrong with that?

What’s with those fucking trumpets? Sounds like a stadium full of angry hornets.

@Dodgerblue: Took an hour, but I’ve finally tuned out the horns. Instead, I’m fascinated by the LED fence.

Note to ESPN: Your clock’s ticking the wrong direction.

Well, I’ll give it this much: No commercial breaks.

@Nabisco: The American announcer just called the Brit announcer “Mar-tin”. Having known a Martin Brit, I can tell you how much they hate swallowing the T.

I’ve just learned through the shared wall that the neighbor is watching the match.

Dempsey fires dribbles it in!

Well, there goes my chance of dropping “nil” into conversation tomorrow.

@Dodgerblue: The BP CEO already said he wants his life back after that screw up.

@Dodgerblue: The neighbor sez the flub is already on YouTube. All twelve camera angles.

JOHANNESBURG (South Africa) – FOOTBALL fans attending the World Cup risk permanent damage to their hearing from the vuvuzela horns which are the must-have accessory at the tournament in South Africa, a study said on Monday.

The din emitting from the tuneless plastic horns is louder than that from a drum or a chainsaw, according to the survey by hearing aid manufacturer Phonak.

‘Extended exposure at just 85 decibels puts us at a risk of permanent noise-induced hearing loss,’ Phonak said in a statement on the SAPA news agency.

‘When subjected to 100 decibels or more, hearing damage can occur in just 15 minutes.’ While the horns have gone down a storm among South African supporters, players from rival teams have been less enthusiastic.

Spain midfielder Xabi Alonso has called for it to be banned as it impedes players’ concentration but FIFA chief Sepp Blatter has defended it as a part of South African football culture.

@Dodgerblue: I’ve got Brit announcers, I can hear the stiff upper lip.

ADD: nope. She must be day candy, only.

ADD2: but her replacement, a latino, just said the goalie suffered “budderfeengers” on that blown save.

News coming in that the goalie is already on his way to an Australian penal colony.

@Nabisco: I’ve got the Spanish-language broadcast on now. I like the way the guy says “Ingle-terrrrrrra!”

Ay, right in the cojones, but he hangs onto it.

/Breaking/ I felt this one, but it took awhile to show up on the charts.

Pretty far away, but I was pretty sure I was either having a stroke or the floor was moving ever so slightly.

@Dodgerblue: Oh, to be one of those sports bras …

@Dodgerblue: Tsunami watch, but no warning or even ETA of any significant waves. This side of the island should be fine.

Uno a uno. OK, back to gardening.

So here’s the funny thing: with a tie, each team actually gets 1 point in their division. Which is worse than 2 points for a win, but better than a goose egg from a loss. What a game!

ADD: Brits are whining about the fookin ball. How many of those same “lively balls” did Tim Howard hoover up? Wanquers.

@Nabisco: From what little attention I pay, I’ve heard that teams play it safe in early rounds for that precious tie point. Proper brackets would add that needed dose of desperation.

@Dodgerblue: My friends and I started watching the Spanish channel for the game too. Hilariously, they were having great fun barking out the English player CROUCH!

Well, not sure yet. But something just lurched.

No, not San Andreas. The other Quake Gulch that’s getting all the attention in these parts.

@flippin eck: I noticed that too — they just cracked themselves up saying CROUCH!!!

@nojo: 4.9 near Borrego Springs. North and across the hills from your quiet Navy town.

@nojo: No word on whether the tsunami watch amounted to anything more than slightly higher tide on the eastern shores over here.

@Dodgerblue: @flippin eck: I miss Univision. You haven’t heard a baseball broadcast until you’ve listened to it in el espanish.

ADD: Oh and those Acereros from American football? Huge in Mejico.

@nojo: @Nabisco: Japan got hit with a 6.1 magnitude quake today. Maybe the god of tectonic plates is pissed because he had money on England.

@Nabisco: Every Dodger game is broadcast in Spanish. One of the announcers is Fernando Valenzuela, the hugely popular former Dodger pitcher.

@Dodgerblue: Sounds like somebody sparked the Ring of Fire.