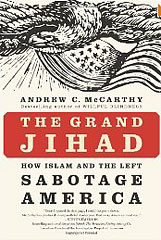 Title: “The Grand Jihad: How Islam and the Left Sabotage America”

Blurb: “The real threat to the United States is not terrorism. The real threat is Islamism, whose sophisticated forces have collaborated with the American Left not only to undermine U.S. national security but also to shred the fabric of American constitutional democracy — freedom and individual liberty… Andrew C. McCarthy offers a harrowing account of how the global Islamist movement’s jihad involves far more than terrorist attacks, and how it has found the ideal partner in President Barack Obama, whose Islamist sympathies run deep.”

Review: “We need to stand up and engage this war of civilizations at all levels. Folks, this is not going to go away. Our enemy is implacable, patient, and relentless. We have to be stronger, more tenacious, and willing to endure all things until we achieve victory.”

Customers Also Bought: “How the Obama Administration has Politicized Justice,” “How The Obama Administration Threatens Our National Security,” “How Barack Obama is Endangering our National Sovereignty,” “How the Obama Administration Threatens to Undermine Our Elections,” “How Obama is Transforming America Through Immigration,” “How Obama Has Mishandled the War on Terror,” “Why Obama’s Government Takeover of Health Care Will Be a Disaster,” “The Bad Science and Bad Policy of Obama’s Global Warming Agenda,” “Obama’s Radical Transformation of America: Year One,” “How Barack Obama is Bankrupting the U.S. Economy,” “Rules for Radicals”.

Footnote: The only thing we have to fear is Beck not plugging us.

The Grand Jihad: How Islam and the Left Sabotage America [Amazon]

nojo
7:00 am • Sunday • May 30, 2010
comment »
Choose Your Delusion
Seventeen States Going Nazi, to Follow AZ in War on Melanin-Enhanced Americans Your Moment of Cute
7 Comments
ManchuCandidate

Does this include a forward by Ally Sheedy?

Poor old Samuel Huntington must be pissed with doofi like this guy stealing his book.

@ManchuCandidate: You beat me to it, I was thinking “Andrew McCarthy stopped making Molly Ringwald movies and wrote this?”

The RW Dominionist projection is oozing so hard out of this one it’s almost embarrassing.

Did you guys see this? The Dunning-Krueger Effect. It really, really explains so much. (Just click on “Show Transcript” to read it rather than listen to it.) It’s scientifically proven: dipshits are full of themselves, and intelligent people are self-deprecating. Encouragingly to me, it talks about how to redeem the dipshits so that at least they’re not completely full of themselves any more.

@IanJ:
Palin is the Queen of DK.

I think it’s been discussed but not by name though.

@IanJ: It’s scientifically proven: dipshits are full of themselves, and intelligent people are self-deprecating.

Socrates (more or less): Acknowledging your own ignorance is the first step towards wisdom.