Stinque
Home Latest Comments Log in
If it smells, we’re on it.
Stinque
Mastodon: @stinque@mas.to
Democracy in America, Sociopaths, Teabaggery 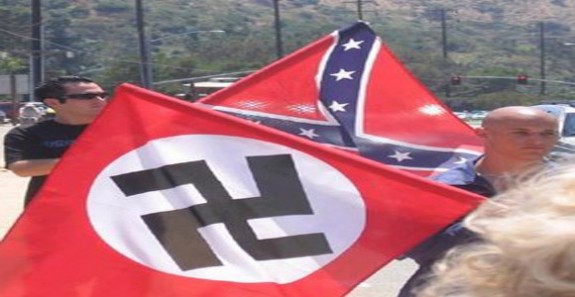 The neoconfederate, neonazi front group Americans for Legal Immigration PAC (ALIPAC) announced this month that some 17 states are now filing versions of Arizona’s SB 1070 law which is designed to terrorize non-white Americans and give psychopathic racists an outlet for their depthless rage and hatred for the election of a melanin-enriched president.

The fascist dogs at ALIPAC have been inciting legislators in the most nazi-sympathetic states to file legislation to legalize the arbitrary arrest and terrorism of non-whites.

Please monitor the ALIPAC site to track the names of legislators who are sponsoring nazi laws and do make yourself available to offer each of them an extended urinary event on his or her fascist fucking face.

The forces of hate and rage are gearing up for this year’s Congressional elections and the presidential race of 2012. This kind of legislative push is a catalyst to draw the teabaggers, neonazis, neoconfederates and neomedievalists of the Republican party under one big banner of racialist fury. It will all be almost completely sponsored by industry, of course, through a series of 527 groups and ‘think tanks’ but the result will be exactly what the corporatist oligarchs desire: all America at each other’s throats while they savagely rape America’s collective ass for another 30 years.

Which leads us to the next question: who is funding the ALIPAC fucktards?

Teabaggers in town to support SB1070 by “buycott” are meeting at a stadium named for the Spanish word for devil. Perfect.

Well, I can see from the helpful link you provided that the fucktard in Idaho who is pushing this xenophobic Know Nothing crap is a Republican from Hayden Lake, home of the Aryan Nations. I like to say that the Aryan Nation scum of the earth come from out of state . Most of them are. I hate to think that their sympathizers are locals, but some of them are. By the same token, there were Austrians and Czechs who welcomed the Nazis. Time for another Green Death ((AKA Rainier Ale). (Disclaimer, I have ancestors who settled that area in the 1880s. I hope they’re twirling in their graves under the Rathdrum Prairie.)

who is funding the ALIPAC fucktards?

My guess would be Club for Growth.

extended urinary event: is that what happens when I relieve my morning in AmriKKKa wood?

@Mistress Cynica: I’d be interested to hear what the Chamber of Commerce says about targeting the cheap labor that supplies so much of the “economic growth” in our fine upstanding nation.

That fine upstanding nation that worships the rule of law when applied to the poor and downtrodden, but not so much for the wealthy and politically connected.

But I wouldn’t avert my eyes to some vengeance. Or hate-fucking (as long as the object of such hate-fucking is the standard preppy 6′ square-jaw, preferably wearing a polo shirt and a hint of five-o-clock shadow. I couldn’t guarantee there wouldn’t be an extended urinary event.)

oh, fine. i’m finally able to check in on the stinquers and what do i see?my favorite symbol to get my blood rushing. i’ve been on an oxytocin high with a new puppeh!! so let’s talk dogs.
i loved my beloved Sergio more than i have words for and have been in authentic grief since his passing. but he was a handful. a huge dog, with a flowing silky coat that was a big pain in my OCD ass.
and my departed little shih tzus needed haircuts.
no shedders! no haircuts! no waking up in the middle of the night with that huge thing on top of me! (the dog, the dog) i exclaimed! so what do i do? i go and get a MASTIFF. in a list of 300 dogs, mastiff would have come in at 300. then i started reading about their history. they are the dogs that accompanied the gladiators into the coliseum, and went to war with the soldiers. now why would they do this? the vet sat us down for a serious talk yesterday. it seems they have one flaw. (well, other than being behemoths) they attach themselves to one person, and will defend that person to the death. the vet cautioned us to make sure she bonds with daddy too (yeah right, he pet her once or twice, i’m on 24 hour call, he hasn’t missed a snore.) she will be polite to welcomed strangers but has a keen sense if their person is in danger. i picked one of the runts thinking it wouldn’t be SO big. no no no says doggy doc…the runts can grow to be the biggest of the litter. i’m looking at 200 pounds. her parents are gorgeous. their enormous heads look like the cowardly lion! the jowls, the droopy eyes.
as i was leaving with her, i stopped to tell her mommy what good care i would take of her baby. she gave me a huge kiss that wet my entire face. some people don’t like a huge sloppy dog kiss. i’m not one of them.
when she is full grown,i will feed her nazi’s and ratbastard.
pics forthcoming…

@baked: Good luck with the crate training. You’ll need a trailer. But. If you were to crate train her you could use whatever crate she’d travel in. She’d think of it as home. Less stress. Or are you already doing that? She’s very pretty.

But those old breeds are seductive. Personally, I want a Pharaoh Hound.

BTW. Did I already say this? That I’m dying to meet RB so I can say to him “I’ve heard so much about you. None of it good.”