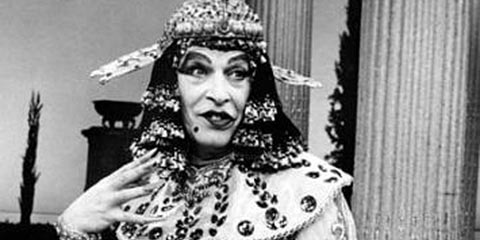 We’re having a hard time telling the difference between blind faith in private property and blind faith in free markets. Especially since both have proven apocalyptically disastrous.

nojo
7:00 am • Saturday • May 22, 2010
comment »
Choose Your Delusion
Rand’s Highway to Hell It Doesn’t Say Anything Here About Rubber Chickens
25 Comments
Serolf Divad

One of the best comments I’ve seen on Paul comes from one of Andrew Sullivan’s readers who e-mailed him the following:

Here’s the problem with Rand Paul’s statements over the Civil Rights Act. If he were truly a pure libertarian, they’d be defensible theoretical views, as you point out. But, as Time magazine notes:

” Paul has lately said he would not leave abortion to the states, he doesn’t believe in legalizing drugs like marijuana and cocaine, he’d support federal drug laws, he’d vote to support Kentucky’s coal interests and he’d be tough on national security.”

Paul is willing to bend the issue of pure personal freedom for drug laws, abortion, and even coal subsidies … but he thinks telling a restaurant it cannot discriminate is a bridge too far? I still don’t think he’s racist, but what he chooses to be ideologically pure about certainly raises my eyebrow.

What’s most disgusting to me about Libertarians like Paul is that they seem to believe that there is a civil right to absolute property ownership, but there is no right to not be barred from employment, housing or service because of the color of your skin.

Once you recognize a right to not be discriminated against, then what you’ve got is a simple conflict of rights: your right to property ownership weighed against my right to not be discriminated against. And when rights come into conflict we balance the rights against each other and come to a suitable compromise: you can prevent people who aren’t wearing a tie from eating at your restaurant, but you can’t keep people out because of their race, for instance. The notion that this constitutes a government “takeover” of your business, as Paul suggests in the Maddow interview, is the sort of stupid absolutist view of property rights that prevents me from taking Libertarian seriously.

Because, despite all our talk of “God given rights” right are not God given. They are artificial constructs created by men. They are agreements to act in certain ways under certain circumstances. Paul wants us to agree to put a man in jail if he drives away with Paul’s car, but he doesn’t want us to agree to put the man in jail if he stops only black people from eating at his restaurant.

Paul’s ideology reflects the concerns only of white, upper class males. And some of these are concerns to minorities also. But he is completely oblivious to the concerns of people who are not like him, and his ideology demonstrates that fact.

texas has rewritten textbooks. this has passed by the way, and for the next 10 years the young texans will be taught about our “christian” nation and repub. values, such as, and how jefferson davis was a hero, blah blah blah.
good morning!
i’m not awake, someone find a better link with the appaling details.

unrelated, but let’s hear it again for texas.
they changed the name of a dorm at the U to honor a klansman. nice.

@baked:
Tejas, the first state where the public school kids will get a fundie Home Skule edumakashun.

@baked: No, you have it backwards
what UT is doing is that there is a dorm named for 1920s professor, and they are considering STRIPPING his name from the dorm.
http://abclocal.go.com/ktrk/story?section=news/state&id=7456045

@Nabisco: COTD. Your work here is done–go spend some time with Ma Bisco and the Biscuits! ;)

@Nabisco: Hmmm, that has possibilities but it is so elegant, so lean and conclusive it almost legitimizes the boy’s derangement. Still, the guy does represent a new edge of the libertarian diagnosis, embracing the constitution as a document to defend nazi philosophies. While I appreciate the term’s precision, the FlyingChainSaw in me hungers for a term that lands with a juicy wallop on the face of the criminal cad it at whom it is hurled. Lemme think about this.

@SanFranLefty:
oh, that’s good. how did i get that *puff puff* so confused?
how about the textbooks? please tell me i’m confused *puff puff*
i’m going back to bed now. in the attic.

@Serolf Divad: Where do these guys think property “rights” come from? Jesus? Buddha? Willie Mays? They are what society chooses them to be, and chooses to enforce.

Lest this thread get too serious, may I point out that Uncle Miltie is said to have had the biggest wang in Hollywood.

@Dodgerblue: Oh, the Constitution and Property Rights come from God, who stands on his throne in heaven shouting White Power! and playing air guitar to stormfront records’ neonazi grindcore tunes.

@baked: Alas, not confused about the textbooks, but California is considering a bill that would prohibit school districts from using the Texas-version textbooks – basically force the book publishers to continue to have books based in reality and science.

Bill White, the Dem running for governor and ex-mayor of Houston, has been decrying the textbook changes because he said it makes Texas very unattractive for businesses, especially high-tech businesses, to relocate because the sensible employees and owners won’t want their kids exposed to the nonsense. Who knows if that’ll get through to the bid-ness crowd.

@SanFranLefty: A clever argument, but are the dumb fucks on the school board too dumb to appreciate it? How much larnin’ do you need to follow a cow around and pick up its poops?

@nojo: I here there was a little tremor down your way. All is well at Stinque World HQ?

@nojo: Ava’s quote about Frank is my favorite.

@Mistress Cynica: There was? Let’s check…

It takes a 5.0 to even mildly grab your attention (and not mistake it for a truck passing by), and I don’t see any of those in the list. The 4.8 and 4.9 this morning passed unnoticed.

See also John Ireland. Hot hot hot lover of men famous for the packing of the monster meat. Now go watch the “Let’s play with our guns” scene from Red River with this in mind. Johnny and Monty play with their guns. Who shoots first?

Sidebar: Johnny Worthy, (not all gay men are named Johnny; many of the commoner sort are named Tom or Thomas) boy dancer in London famous for the size of his wanger, would take it out on stage and put it in ladies’ hands as they tried to act. Hilarity ensued. Luckily, the punters at that time were not paying 80 quid for orchestra stalls.

Somehow I can’t get worked up over the size of Uncle Miltie’s package. In fact I wish it would go away. Far away. Speaking of monster packages, our own dear noje is not alone in his comical story of show biz becoming confused with academia. One of Churchill’s aides, mistaking his intent (or perhaps belonging to the Pink Party?), when his boss told him to invite Berlin to luncheon at 10 Downing Street, invited Irving instead of Isiah. Again, hilarity ensued. Though I have no idea about the size of any of the participant’s equipment.

Can anybody here read this douche’s article and not want to punch him in the face? I’m sure Rand and him would get along great.

Oh, and this. Don’t you just *love* Paultards?

Well, Rand bailed on Meet the Press. Wants to spend more time being exhausted with his family, he says. Throws in the whole NBC-talking-heads-are-a-bunch-of-Commies thing for good measure. Which makes him a hero to his base, of course. But still: WEAK, DOOD.

Remember during the 2008 campaign when Sarah Palin’s handlers decided they weren’t going to make her available for interviews?

Face it: Rand Paul is the male Sarah Palin.

@Serolf Divad: This I have said, he is sarah palin without the charisma, such as hers is. Its dumb, but it works on the stupids.

he is sarah palin without the charisma tits

@nojo: I say yes and bravo to you on your correction, judged from appreciation of effective snark.

But WRT Palin’s tits, I gotta tell you, they are not the source of her attractiveness. Yes, they are the best possible shorthand for the fact that merely because she is a sexually attractive female, she has achieved far more notoriety and “fame” than a fat bald middle-aged guy saying the exact same things would ever achieve.

But Nojo, to the extent she is physically attractive, it was never about the tits. Years ago, before anyone knew she was a batshit retard, Wonkette discovered her, and she was dubbed the GILF, governor I’d like to fuck, and her feminine charms were given sincere credit from the ranks.

But it was never about the tits. Never, they’re not remarkable in any way, and she hides them, and it just wasn’t about that.

No, at first glance, she strikes one as “hot geek.” Glasses, pretty, but not a hottie, you know? Clinging to 80s hairstyles and fashions, obviously never got beyond her pageant days, she always seemed kinda geeky, oh, we were completely wrong, its not the “hot girl who doesn’t quite realize it and is somehow approachable, Tina Fey kinda attractiveness smart shy boys hope for and dream of, no, she seems geeky, at first glance, in still photos, because she is batshit insane and retarded. The glasses fooled us.

Her followers are all female. If she had big tits, they’d hate her. Maybe there is some tit-worship going on in the trailer parks, but on the whole, her tits are just irrelevant. I have never seen a comment about her, never heard a person mention, her tits, it was that face. It fooled me.