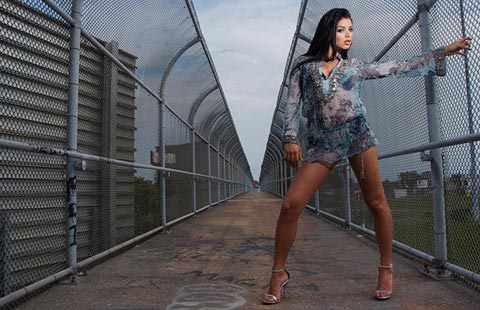 “This is unbelievable,” said Rami Haddad, 26 of Livonia, one of Fakih’s biggest supporters. “It’s a dream come true. I can’t express my feelings.”

Fakih, of Lebanese descent, is believed to be the first Arab American and Muslim to become Miss USA.

It’s a sad day in America but a very predictable one, given the politically correct, Islamo-pandering climate in which we’re mired. The Hezbollah-supporting Shi’ite Muslim, Miss Michigan Rima Fakih — whose bid for the pageant was financed by an Islamic terrorist and immigration fraud perpetrator — won the Miss USA contest. I was on top of this story before anyone, telling you about who Fakih is and her extremist and deadly ties.

nojo
2:00 pm • Monday • May 17, 2010
comment »
Choose Your Delusion
Whitman on Welfare To the Batpoles!
35 Comments
Tommmcat Still Gets Carly Confused With Meg

“Fakih won the crown after her hotness caused all other contestants to burst into flames or flee from the stage as lip injections and breast implants began exploding . . . Miss Oklahoma’s face and body melted like a Nazi in ‘Raiders of the Lost Ark’ . . . ”

The 24-year-old brunette from Michigan beat out four blondes . . .

In the interview, Fakih was asked whether she thought birth control should be paid for by health insurance, and she said she believed it should.

Are we allowed to call out Daniel Pipes as the racist he clearly is yet?

Thats right Michelle, people hate racist pigfuckers like Miss Oklahoma; nothing in the Constitution says we have to like people despite their abhorent political beliefs, it just says they have a right to have and express their beliefs. Some people should keep their fucking mouths shut if they want people to like them.

Schlussel, I think she is opening herself up for a good old-fashioned suing bee.

The wingnuts must be losing their touch – I expected the punchline to be more like this:

The gays who secretly control the pageants are intentionally picking Muslim winners to try to provoke another terrorist attack, which the evil Kenyan Obama will then use as an excuse to round up patriots and confiscate their guns.

Either that, or some sort of diabolical plan to cause earthquakes – *something*. “It must be affirmative action” is SO played out. :)

Pipes, he has teh Israel thing, he seems less racist than the old “why do you hate Israel” as the question following any mention ever of any slight sympathy for, or acknowledgment of the human status of, Palestinians.

Oh Debbie. Always with the ‘make sure I get credit for being the first blogger to tell you about this!’. I liked her better when she was picking fights with Malkin.

@PedonatorUSA: As someone amusingly said on brand W, the terrorists have not only won, but they got a nice tiara, too.

Pipes approvingly quotes this e-mail from a blog reader:

No surprise here. Affirmative action was first applied in beauty contests for black women to win in the 1980s, then it was the turn of Latin, brown skinned women, and now it’s Muslims. That’s why most people ignore these rigged “events.” They are money losers and require controversy.

And really, what further proof do you need that beauty contests are rigged than the simple fact that a black woman was handed the crown in the 1980s when there were perfectly good white women standing just a few feet away who were inexplicably passed up?

Going along with my new wholesome outlook expressed on another thread (is anything older than the last thread?) I found this on TFLN – my go-to source for info on all you hipster/losers/future rulers of US. And I quote:

I have only been in this city 3 nights and there are already 4 bars I can never go back to again.

Doesn’t that warm your cockles? Don’t you wish you knew what a cockle was? The kids are alright!

And BTW, Vanessa Williams is fucking gorgeous. Only an unreconstructed racist would question the merits of her title (absent the nudie photo scandal, of course).

@Serolf Divad: Hello! Maybe the pagent people just want to be able to compete at Miss Universe. Did anyone think of that? No dumb immigrant-hating beeeyotch from Oklahoma would stand a chance. If movies have taught me anything (okay, Drop Dead Gorgeous) it is that there is no place more maniacal and shrewd than a beauty contest.

TJ: Newt gets shit from Fox News for not supporting Mike Lee.

Apparently Miss USA won a pole dancing contest sponsored by a local radio station a few years ago. Also, I read that people were criticizing the pagent for doing Victoria’s Secret style photo shoots of contestants, so it probably all evens out.

@Serolf Divad: And Fakih is way hotter than the okie runner-up. These people are losing sight of what’s truly important in the world: hotness. Thank gawd for Donald Trump.

How can we keep getting the Terrorist Muslims into these pageants? This just reminds me of the computer simulation Nat’l Geo (I think) ran a few years ago showing the face of someone who was a blend of all sorts of “races,” and it was jaw-droppingly beautiful.

@redmanlaw:
The 4 blonds looked like they were cloned from the same pageant winner.

Ever seen Drag Queens plot against each other for top billing?

Hehe. It is a guilty pleasure.

I just hope this lovely young woman will be safe – remember what happened to Theo van Gogh … some nutjob in Saudi might lose his shit because we can see her hair … and a lot more.

@blogenfreude: You could offer to provide a safe house . . .

@Dodgerblue: I’m sure I’m not the first one to offer to smuggle her a Stinger beneath my robes.

@Nabisco: Dude, I suggested some venues for you in another thread. You might also try checking the listings here next week.

@redmanlaw: I would certainly offer her my Jennifer convertible … imagine the GF’s surprise!

I’m in and out in two days in order to free up time to see my biscuits, but are you around Mon/Tues next?

@TJ/ Jamie Sommers /TJ: Jesus, it’s not just the white people and bishops in Arizona who are crazy. Poor woman.