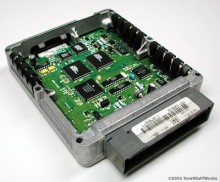 As if you didn’t have enough to worry about:

CarShark’s a computer program that’ll let someone hack into a car’s onboard computer system to kill the brakes, disable the engine, blast music and otherwise wreak electronic havoc. It’s both clever and absolutely frightening. Here’s how it works.

A team of researchers led by professors at the University of Washington and USCD hacked the Controller Area Network (CAN) system installed on all new cars built in the United States to show how potentially vulnerable the system is. The CAN is supposed to allow onboard vehicle systems to communicate so problems are easier to diagnose, but the hands of these hackers it’s the open door to disabling a vehicle.

CarShark Software Lets You Hack Into, Control, and Kill Any Car [Jalopnik]

@Serolf Divad: Almost bought one of those in ’91, but got a Civic CRX Si instead.

I smell the plot for an action/chase movie. Preferably starring Jason Strathan.

Oh dear: Ramos-Lopez’s account had been closed when he was terminated from Texas Auto Center in a workforce reduction last month, but he allegedly got in through another employee’s account, Garcia says. At first, the intruder targeted vehicles by searching on the names of specific customers. Then he discovered he could pull up a database of all 1,100 Auto Center customers whose cars were equipped with the device. He started going down the list in alphabetical order, vandalizing the records, disabling the cars and setting off the horns.

I’ve thought about trading my Civic in for one of these. Well not actually a trade in, because over here they are cheap and ubiquitous but I’d have to pay shipping and duty to get it home.

Meh. Anyone both competent enough to *find* the OBD-II port and having physical access to the internals of your car could fuck it up quite bad, computers or not. There’s no wireless access to any of those systems.

The Texas Auto Center case above, on the other hand, *is* remote access. But it’s not like those drivers were unaware of the company’s ability to “brick” their cars – that’s part of the loan agreement.

@Nabisco: Two words – death trap. No airbags, no ABS, no crumple zones – nothing. Single channel brakes – if the channel fails, you have no brakes. On a modern car, you still have half your braking power. And 36 horsepower … there are riding mowers with more power. On the other hand, if you kept it off the highway and only drove it on weekends, not so bad.

I am not a farmer/gardener. My lawn and I don’t really get along to be blunt. Just spent a good two hours physically weeding (I want KILLEX which is now banned here) and feeding my lawn with fertilizer. Seed will come later because I discovered why I had mice in the garage (little buggers feasted on the seed) as my housemate (who said he wanted to work on the lawn…) left a bag of the stuff within easy reach of field mice. Oh well.

I guess I have limited appreciation of life outside of eating it.