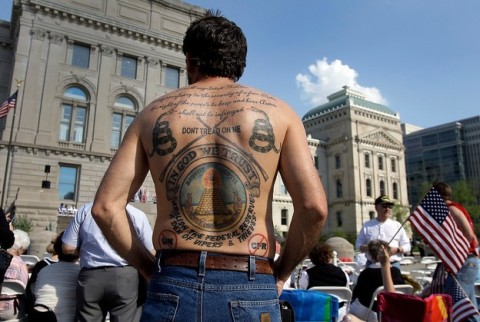 (photo: Michael Conroy/A.P. caption: Darryl Herbertz, of Moorseville, Ind., displays his tattoo with the text of the Second Amendment, along with other images of protest during a tea party rally outside the Statehouse in Indianapolis, Thursday, April 15, 2010.)

That is the worst tramp stamp ever.

I had to enlarge the photo to determine he has the letters CFR in a red circle with a slash through it on his love handles. What, pray tell, does CFR mean?

@SanFranLefty: I thought “Council on Foreign Relations” – something Teabaggers love to hate.

The Council on Foreign Relations, yeah, they’re the ones who are plotting to hand the U.S. over to a U.N. One World Government run by the Beast of Revelations… or something like that.

Anyway, the black helicopters are strong in this one.

I mis-read the town as “Mooseville” and had a Rocky and Bullwinkle flashback.

@FlyingChainSaw: That’s what I though if, too, but it was hard to imagine getting so worked up by it that one would get a tattoo about it.

@Mistress Cynica: It’s the heart and soul of big government micromanagement of everyone’s lives in America. Sure, why not?

@Mistress Cynica: When you’re such a hoserHoosier that you can’t even put your square butt in a pair of Levis, anything is possible.

I wouldn’t have expected anybody would be so violently opposed to The Community of the Franciscan Friars of the Renewal but it takes all kinds.

This is really something big, you know.

The teabaggers themselves, they are not dangerous. They are mostly angry people, not even aware what they are angry at, frightened of change, closet racists, of the common variety that is probably still the majority of white us amerricans. But mostly, really, just “cranks,” of the sort any staffer for any politician is only too familiar with. Just now, all the crazy cranks have found a high-profile public leader in the fucking Palin Monster.

But what we are seeing now is that this confederation of cranks, has emboldened the true psychopaths to come out.

The teabaggers’ historical role play fantasy rhetoric, invoking the founding fathers “throwing off the yoke of tyranny” and this romantic notion of the “revolution,” combined with the older NRA “from my cold dead hands” rhetoric, this public “acceptance” of this talk of revolution, of violent revolution, “lock and load,” this rhetoric which so closely resembles that of the true insane batshit militias, has emboldened the true batshit to think that their long-held batshit beliefs are now acceptable, and they are coming out of their closets.

The ones who have guns, and bombs, and know how to use them. The one’s who have been drilling in the woods of Idaho and Michigan, these people are emboldened by the teabaggers, even though they really have no real connection to them.

But just think, if one local, rabid teabagger group, is joined by some true insane milita-types, McVeigh types, and the crazies can start to sway the baggers, and drag them into something insane, its possible.

@Promnight: But just think, if one local, rabid teabagger group, is joined by some true insane milita-types, McVeigh types, and the crazies can start to sway the baggers, and drag them into something insane, its possible.

Bubba already drew the connection, and I guess Rushbo turned it around in that rhetorical flourish he has and said ‘It’s your fault if anything happens’ – which is really just idiotic schoolyard banter. But if they have nothing else, the rethugs have the “take our ball and go home” way of governance down pat.

ADD: Fifteen years since OKC. Cyn, I hope you have Mr. Cyn,lots of kittehs and a few bottles of wine to keep you in a happy place.

Is “ones” a pronoun? Third person, plural, subjective case, as in “them ones, over yonder?”

@Promnight: One has one’s doubts.