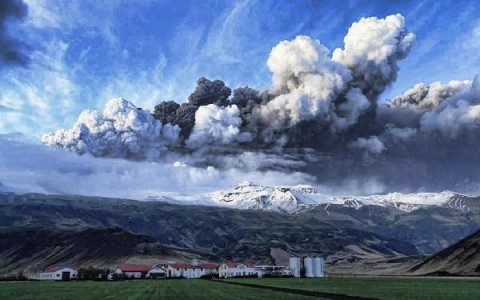 This is just bizarre – air travel (and other things) could be affected for weeks, or months:

Smoke and steam hangs over the volcano under the Eyjafjallajokull glacier in Iceland, Wednesday April 14, 2010, which has erupted for the second time in less than a month, melting ice, shooting smoke and steam into the air and forcing hundreds of people to flee rising floodwaters. Volcanic ash drifting across the Atlantic forced the cancellation of flights in Britain and disrupted air traffic across northern Europe, stranding thousands of passengers. Flights in and out of London Heathrow, Europe’s busiest airport, were halted, and the shutdowns and cancellations spread to France, Belgium, the Netherlands, Denmark, Ireland, Sweden, Finland and Switzerland. The volcano’s smoke and ash poses a threat to aircraft because it can affect visibility, and microscopic debris can get sucked into airplane engines and can cause them to shut down.

Icelandic is such a funny language. Written, it looks like my cat’s been walking on the keyboard. I imagine it sounds about the same. (No offense to Icelandiers.)

Anyone remember the Volcano Suns?

The planet is angry that Stormy won’t run… :)

On a serious note, any bets on how long it will take a televangelist to claim this is somehow related to HCR?

@al2o3cr Tuesday at the latest …

@al2o3cr: Let’s just blame the gheyz and be done with it. For the earthquakes, too.

What a beautiful painting!

Did you kids see the slide show of the volcano over at WaPo?

After looking at those amazing pictures, I accidentally stumbled across a very pretty 13-part short video series on fashion in Washington DC by Alexandra Garcia. Almost makes shopping seem like something I ought to do.

@Mistress Cynica:
don’t forget…the gays were responsible for 9/11 too.
god said so.

I thought the gays were responsible for Hurricane Katrina.

So am I safe to assume gays were also responsible for other tragedies like the Titanic, the Hindenburg, the Black Death, the World War 1 influenza epidemic, the Holocaust, and the Chicago Cubs?

Running a country? There’s an app for that.

When Norway’s prime minister found himself stuck in New York as a volcanic cloud grounded flights to Europe, he fired up his new Apple iPad and did the job remotely.

Sure, any laptop would have worked in a pinch. But you don’t get the photo op that way.

I guess everyone in iNorway will get an iPad.