How to Crash a Server 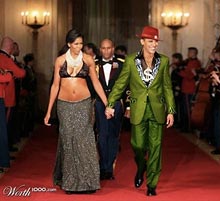 Problem is, the server’s swamped. We can’t reach them.

So we’ll have to make do with TPM’s summary:

An October 2009 email with a photograph showing President Obama and the First Lady dressed in 70s-era blaxploitation pimp and prostitute costumes while attending a formal event at the White House.

A December 2008 email showing a video of African tribesmen performing a traditional dance. The video is entitled “Obama Inauguration Rehearsal.”

A September 2009 email entitled, “Easy Steady Big Fella….XXXX,” with a photograph that graphically depicts a horse having sex with a woman.

A July 2009 email showing a photograph of an airplane landing directly behind a group of black men. The caption reads: “Holy Shit. run niggers, run!”

Paladino’s campaign manager does his best to wave off the controversy, but really, whatchagonnado?

Carl Paladino has forwarded close friends hundreds of email messages he received. Many of these emails he received were off color, some were politically incorrect, few represented his own opinion, and almost none of them were worth remembering.

Yes, we always forward racist, pornographic emails to our friends, with the proviso that they don’t at all represent our opinion, but here, enjoy some horse-fucking.

Then again, while horse-fucking may not be worth remembering, it’s damned hard to forget.

The first step to recovery is realizing that you, Carl, are a racist, sexist horse fucker and admitting it.

The denials otherwise indicate you’re just sinking into a morass of denial and hilarity.

wow
just when you think we have reached the bottom it drops out.

@Tommmcatt Loves The Giant Floating Head: J’aime les francais, except for those awful cigarettes they smoke.

I like how the french roll joints. Tobacco/hootch joints. Awesome.

@nojo:
no
Catherine the Great. or as Mae West said, Catherine WAS Great.

tj/Dude who drank martinis on my couch, Mrs RML’s college buddy, won a Pulitzer today for writing editorials for the Dallas Morning News.

Michelle has some awesome abs.

welcome to the party:

Hallucinogens Have Doctors Tuning In Again

In one of Dr. Griffiths’s first studies, involving 36 people with no serious physical or emotional problems, he and colleagues found that psilocybin could induce what the experimental subjects described as a profound spiritual experience with lasting positive effects for most of them. None had had any previous experience with hallucinogens, and none were even sure what drug was being administered.

@redmanlaw: The brother of a friend won his 2nd Pulitzer for international reporting in WaPo, and the hell-raising son of an attorney I worked with was a finalist for the biography award, something I never would have foreseen when I found him sleeping off a hangover on a conference room table that summer he worked in the firm’s file room.

@Mistress Cynica: @redmanlaw: I was pulling for the National Enquirer to win a Pulitzer for its Johnny Millll baby-daddy/alien-perstorking coverage.

Is it wrong of me to really like that green suit? Barry looks good in it though it really is my color.

Apparently, Republicans are having some sort of contest to see who can make “not racist” as silly a thing to say as “no homo“. (link not remotely SFW, or anywhere for that matter)

Now, what’s the horse-fucking version of that phrase? “No horsefuckery” just doesn’t read. :)

@Capt Howdy: Green is good for me.

@Benedick:
you would look like a Leprechaun in that suit

@Capt Howdy: I’ve got the height. Where do you suppose he bought it? Perfect for cocktails at Chateau Marmont.

@Benedick:
looks like he may have bought it at Chateau Marmont

This is why they are seriously afraid that legalizing gay marriage will lead to interspecies marriage. And here we all thought it was a canard, a ridiculous proposition, but now, we see, they are tempted.

@Promnight: Is “Just Say Neigh” the new GOP slogan for the ’10s?

Srsly. I want that suit.