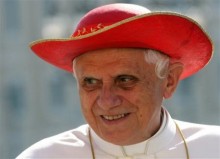 Is there a chance the little fucker will be arrested?

LONDON (Reuters) – British author and atheist campaigner Richard Dawkins will try to have Pope Benedictarrested to face questions over the Catholic church’s child abuse scandal when he visits Britain later this year, one of his lawyers said Sunday.

Dawkins, a scientist and outspoken critic of religion, has asked human rights lawyers to examine whether charges could be brought against the pope.

Covering up child rape.  So Catholic.

Is there any proof this guy didn’t rape little boys, too?

Or proof that he didn’t?

Why is that photo so creepy? Is it the eyes?

@ManchuCandidate: He’s a head of state, I think, the Vatican being a city-state. That might give him some legal immunity against charges of abetting child abuse.

@Dodgerblue: If someone has the balls, he can be arrested. Like Tony Blair or Dick Cheney … the evidence makes them susceptible.

@blogenfreude: I guess they would need to build a special cell for him in gaol, former Hitler Youth child abuse abetters not being terribly popular.

The Onion sums it up perfectly:

Pope Vows to Get Church Pedophilia Down to Acceptable Levels

It’s only a little kid touching, after all.

Watching The National now on CBC. Um, Carole McNeil has had some truly disturbing work done. Human eyes aren’t supposed to be that far apart, and things have gotten downright Picasso-esque.

I don’t understand today’s parliamentary scandal: Some Conservative MP used his work e-mail account for political purposes and he and his wife are resigning? Like no $100K in unmarked bills in the office fridge, having it off with strangers in the airport restroom, faking reasons for a war, banging the pages, vehemenently denying saying something they’re on video saying just 5 minutes previously, boasting that they’re even more of a deranged, sadistic neo-fascist nutcase than the last guy, or wearing diapers even?

Jeebus, somebody in Canadia misplaces a decimal and tha whole frackin’ gummit resigns. In the US, they just flip us the double bird, tell us they’re gonna steal another trillion and ask whaddafuk us piss-ons gonna do about it. I know Harperbot 3000 is all sinister and stuff, but it really must be comforting living in a country governed by relatively sane people.

@Original Andrew:
Yes and no.

Today’s GOP learned at the feet of the Reformers (Blimpy’s faction within the Today’s Cons) and then Newty added US America crazy + fundies + Confederacy, but also Reformers took some pages from the GOP, too.

The problem for the Tories is that they can’t let their inner crazy fly or they would lose critical seats (especially in Quebec and Ont where they need to win.) That’s also in due to the fact that 2/3 of Canada City’s populace resides in said provinces (interesting fact, only Alberta has 50+% of the population church attending where the rest of Canada City sits at 15-30%.) One thing that PM Harpy does well is play political calculus (it seems to be the only thing he’s good at.)

However, the problem is that the MP’s hubby is a loudmouth jackass who got busted for DUI and coke immediately after bragging at a party that he had access to the PMO and could peddle influence within said PMO.*

*The PM office, aka the brain of the entire Harper gov. My initial observation about the Harper gov I’ve said to my Tory friends (who initially laughed it off) is that they don’t have enough bench depth in terms of brains. Considering the number of ministers who have been shuffled, stumbled and have had to be kicked out of cabinet, I’ve been proven right. Many of their ministers with experience have fucked things up badly in past jobs except the finance minister.

I’ve known of Jaffer (hubby) for almost 20 years. None of the stories are good. Ignorant. Stupid. Arrogant. Asshole. Playboy. Consistently one of the worst MPs in parliament. Only reason he had a seat was because he was Reform in Alberta (an odd duck too considering a sizable minority of the Reform base would consider Jaffer not a “REAL” Canada City dweller.) He was used for minority outreach till the Reformers realized that he was not a good example.