Stinque
Home Latest Comments Log in
If it smells, we’re on it.
Stinque
Assholes, they do vex us.
A Thought At Bedtime

Up in the Air 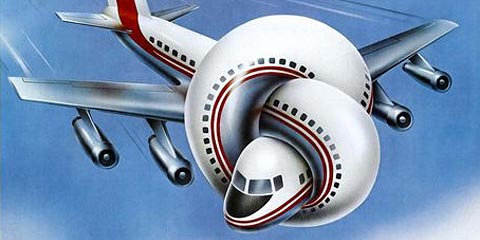 Here’s what you missed if you weren’t paying attention Wednesday night:

1. Breaking news that someone lit a fuse in his shoe during a United flight from D.C. to Denver.

2. Discovery that the shoe-bomber held a diplomatic passport from Qatar.

3. Fighter jets being scrambled to escort the plane, as air marshals subdued the suspect.

4. No explosives found in the shoes.

5. And the thrilling conclusion: He was trying to sneak a smoke in the bathroom…

Two law enforcement officials told The Associated Press that investigators were told the man was asked about the smell of smoke and he made a joke that he had been trying to light his shoes — an apparent reference to the 2001 so-called “shoe bomber” Richard Reid.

Everyone had a good laugh, slapped each other on the back, and went out for a beer.

In fact, he might have simply been having a cigarette and responding sarcastically, which I guess the marshal didn’t pick up on.

How much of a moron do you have to be to not know by now that you don’t even fucking joke about this shit. Even if the air marshal is 100% certain you’re being sarcastic, your ass is going down, and your wallet is about to get hit hard when the airline sues you for fucking up their shit and forcing a re-rout of their plane, wasting their fuel and having to re-book every passenger.

@Serolf Divad: “But monsieur, I am un diplomat, in my country we choke about zees all zee tyme!”

No, seriously, a total idiot. If I’m a white man visiting Zimbabwe, I don’t go around joking about how I was just “trying to get some land back from Mugabe”.

@NaBEEsko: This is my comment on this at the site which must not be named:

“My god, a haughty, arrogant Arab diplomat who thinks he can get away with anything? I am shocked, shocked, I tell you. I mean, its not like Arab countries aren’t meritocracies, with a professionalized foreign service orgnaization. I can’t believe this guy acted like he came from a ruling family in an autocratic kingdom and has spent his whole life as a privileged, spoiled, ruling class thug asshole. Thats so unlike the way you would expect a diplomat from Qatar to act.”

@Prommie: The limited time I rocked diplomatic immunity, I never embarrassed my hosts. Well, once – I gave the finger to a seriously douchish driver in a country that ‘chu knows well and where that is one of the most offensive things in the world*. It was a moment of high passion, fell on my sword, etc, but it most certainly didn’t bring traffic to a halt, or even make the papers.

*He flipped me off as well, a fact never admitted in our telephone exchange afterwards.