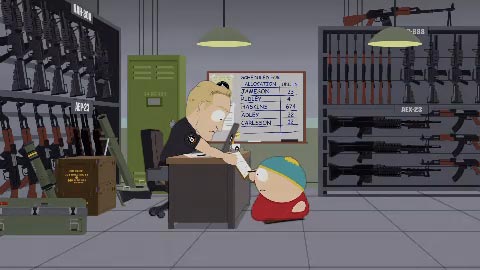 The Mercenaries Formerly Known as Blackwater would like to correct the record for faithful readers of the Washington Independent:

Xe Services LLC disagrees with several statements and opinions in the on-line article by Spencer Ackerman yesterday (”DynCorp Wins Its Bid to Stop Blackwater’s Next Afghanistan contract — For Now”), but the statement that the company “stole guns intended for the Afghan police from a U.S. military depot near Kabul” is factually wrong and warrants correction. No guns were stolen. As documents released by the Senate Armed Services Committee (”SASC”) demonstrate, the company obtained weapons from “Bunker 22,” which is an Afghan National Police weapons and ammunition storage facility (including weapons coalition forces seized from insurgents or discovered in caches often dating back to the Soviet occupation) whose operation is managed by U.S. military personnel. The company obtained these weapons with the knowledge and assistance of U.S. military personnel managing the facility. Therefore, these weapons could not have been stolen.

The Blackwater complaint is correct, as far as it goes — the weapons weren’t stolen in the dead of night during a daring heist, but taken without authorization under false pretenses.

This includes the two hundred AK-47s removed from the aforementioned Bunker 22 by a Blackwaterite (Xeist?) signing himself “Eric Cartman”. That moment will be immortalized during tonight’s season premiere of South Park, and we’re sure Trey & Matt would like to thank Blackwater’s general counsel for the additional timely promotion.

So how does the episode end? Does Erik Prince get a wedgie?

It wasn’t stealing… it was a… er… five finger discount. Totally not the same thing.

The new name of “Xe” makes me think they’re somehow associated with the Scientologists. All the more reason for Trey and Matt to go after them.

Well, I built me a biz and it’s ready for grift’n’
Ol’ Afghanistan, it’s callin’ my name
Bullets are flyin’
Those motars thumpin’
Blackwater keeps griftn’ for guns just the same

Kokesh Congressional Run Update: HFA crush object/Paultard Adam Kokesh is running for the GOP nomination for New Mexico’s Third Congressional District – heavily Hispanic with liberal enclaves in Santa Fe and Taos but rural with a streak of conservatism, pride in military service, and mostly Catholic. Lots of Democratic-voting Pueblo and Navajo Indians, but also a buncha racist RW assholes up in the NW/Four Corners area.

Candidates need at least 20 percent of the votes cast at last weekend’s pre-primary party conventions to get an automatic ballot spot on the June primary. Here’s how HFA’s boy is doing:

“GOP US House candidate Adam Kokesh received 19.5% at the preprimary. The state GOP is reviewing the matter to determine if Kokesh must be given an official ballot spot.”

A Dem who has a friend as his campaign manager got on the ballot for the lt. gov’s race with 19.9 percent of the convention delegate vote because party rules say to round up, thereby getting him up to 20. If Kokesh can’t get 20, he has a few days to get thousands of signatures on nominating petitions to submit to NM’s secretary of state (the same office that my law school bass player left after calling it a corrupt outfit).

I’ll update as the situation develops.

say it aint so Denny:

Kucinich to switch to yes vote

personally I give the guy credit for doing the right thing. whatever the reason.

Loud sex is grounds for warrantless search! TJ, from raw story, this is horrible: http://www.law.com/jsp/article.jsp?id=1202446277497&rss=newswire

I’m gonna have to start wearing the ball gag all the time, I guess.

The head of Ireland’s Catholics has apologised for his role in mishandling the case of a serial child abuser.

As a priest in 1975 Cardinal Sean Brady was at meetings where children signed vows of silence over complaints against paedophile priest Fr Brendan Smyth.

@redmanlaw: I love the Brits’ use of the gratuitous A in words like paedophile or the extraneous O in foetus.

/sorry, too early to think about sex abusing priests and ball gags all at the same time

@redmanlaw:
the truth about St Patricks day:
the “snakes” were the Druids. who chose the snake as their symbol long before their starring role in the garden of eden myth.
so when you celebrate this just remember you are celebrating the genocide of an extremely civilized and learned group of people. who happened, because of their gnostic beliefs, to be a huge threat to the Pope and the “faith” crap he was selling.

@Capt Howdy: Hey now, the Romans were hating on the druids long before Rome went Christian. Fortunately, the Druids were able to use their powers to transport their society way down below the Ocean, to Atlantis, of course.

What is it with Heavy Metal dudes and druids, anyways? Why is that a thing? It seems counter-intuitive.

@Tommmcatt Loves The Giant Floating Head:
Blame Led Zeppelin. Robert Plant used a lot of Lord of the Rings references in his songs and they stuck. What Head Banger is going to shit on Led Zeppelin? No one, that’s who. Shit on Led and you might as well, cut your hair, put on a LaCoste Shirt/ Khakis and listen to Duran Duran.

Hawaii is sick your shit, birthers.

@ManchuCandidate: Its was the 70s, dude, flower-power and tie dye. Anyway, I was quoting, sorta, Donovan. Wear your love like heaven, man.

@Capt Howdy:
Rahm has the Kucinich / Edwards / Hunter 3-way sex tape. They screened it on Air Force One on the way to the Ohio rally.

Well well well…where have we been, little mister?

@ManchuCandidate: Or Hootie and the Blowfish.

@nojo: @blogenfreude: Ignore him. He is only here for the brackets.

@libertarian tool: FlyingChainSaw has been salivating for the Mrs. Kucinich sex tape.
@Barrington Chadsworth IV: That’s all we’re good for?

@nojo: Hey Noje, when you have a chance can you put a linque to the brackets on the home page? Don’t want Benedick to miss it.

@SanFranLefty: Well yeah. What happened to her after the campaign? Short term contract?

@blogenfreude: I can’t help it if the dolphins make me cry.

A FUCKING MOUNTAIN LION was captured this morning in Santa Fe about a two minute drive east of Casa RML.

and, brand new judge* permits hippie weirdo’s lawsuit over neighbor’s use of wi-fi and other wireless devices to proceed, minus iPhone claim:

*Yup. I sat on her judicial nomination panel and voted to send her name to the governor as one of several candidates to fill a district court vacancy here.

@SanFranLefty: I was going to post a reminder today, but that’s even better.

Are you kidding me? Can’t a judge issue some kind of “bullshit” order for stuff like this? “I will give you seven days to work it out” my ass. Any fool that thinks wireless phones are going to cause cardiac arrhythmia is not going to sit down over scones and hash things out.

Led Zeppelin may have started it, but Spinal Tap finished it.

@Tommmcatt Loves The Giant Floating Head: what with their being FCC approval of the devices and federal pre-emption, yes, yes indeed the judge could do even better, the judge could just shitcan the motherfucker on a defense motion for dismissal.

@Barrington Chadsworth IV: The Viking shit is also strong in metal, but it’s mainly about negative emotions with the Devil added to taste.

Metal will never die as long as there is one pissed off guy with a guitar.

@Tommmcatt Loves The Giant Floating Head, Prommie: I’m as fucking shocked as you are. I bet defense counsel feels like they got a baseball bat to the gut followed by a home run derby swing to the head and a steel toed boot to the nuts.

@Tommmcatt Loves The Giant Floating Head: I can’t believe I’m beating the libertarian tool in telling you this, but our very own Mayor McDreamy, before he announced that he wants to be the Lite Guvner (after shitting all over the office of Lite Guvner a few months ago and saying he doesn’t know what its duties are), proposed that all cell phones sold in Ess Eff have warning labels on them cautioning people about the brain tumors cell phone signals might cause. Given this is from a man who always has his cell phone strapped to his waist and feels the need to Live-Twitter his daughter’s birth, it’s especially idiotic.

@SanFranLefty: Here’s something funny along those lines: my snub-nose revolver now sports warning labels for – get this – the laser. Everything else about it is perfectly safe.

I am waiting for some enterprising lawyer to sue the state, cite a scientific study showing that fear and stress cause cancer, and demand that every single California cancer warning sign include this footnote:

Warning: The State of California has determined that reading this warning can cause cancer.

I wish we had a legal thingie like I read about in Sweden and Denmark. There, judges can ignore standing law if they rule that in the specific case in question application of it would be total and complete wankery. Or something like that, I was stoned when I read the article.

@SanFranLefty: From the Greek, darling. We used to spell them with that linked letter thingy but it made the Yanks cry so we dropped it.

You Brits and your tribal customs!

@Nigel Cringe: Our kœybörds thank you.

@Tommmcatt Loves The Giant Floating Head:
Focus group of poor stoner philosophy majors from UCLA* and UC Irvine theatre students** who got high and sat through three hours of “testing” for Ramen and weed money?

“Dude, yes, MOST DEFINITELY the demon sheep! That is soooo awesome!”

* and ** = Just showing some love for the El Ayers around here

@SanFranLefty: No, no, no. It’s the Mrs. Kucinich/Mrs. Obama sex tape. Have you seen it?

@Tommmcatt Loves The Giant Floating Head: I do. I can see it. The red hair splayed across Michelle’s convulsing tummy, the sound of wet sloppy kisses and Michelle’s shrieks of mind-melting pleasure. I can hear it.

@FlyingChainSaw: So just paste Mrs. Kucinich’s head where Johnny Mill’s was, and Shelley Oh! in the Alien Chick’s spot?

I expect the current administration to release documents that prove/absolve Xe’s culpability and/or the chain of commands that allowed this to happen…any minute now…ok, NOW

…ok, but I still believe in change and hope and transparency…any time now…