Stinque
Home Latest Comments Log in
If it smells, we’re on it.
Stinque
Lovely day for a Perp Walk.
DOTD 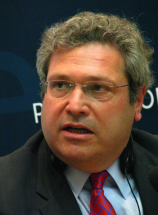 Why do they allow the always-wrong Kagans to say anything at all? More stupid shit from Robert K:

The contretemps between President Obama and Israel needs to be seen in a broader global context. The president who ran against “unilateralism” in the 2008 campaign has worse relations overall with American allies than George W. Bush did in his second term.

Right – far better to have an administration that launches an expensive, unwinnable, and unnecessary war, urged on by people like the Kagans.

No rational person would believe a word Robert Kagan says about anything. He has been spewing out one falsehood after the next for the last four years in order to blind Americans about the real state of affairs concerning the invasion which he and his comrade and writing partner, Bill Kristol, did as much as anyone else to sell to the American public.

In April, 2003, Kagan declared the war over and said we won. Since then, he has continuously claimed that things were getting better in Iraq. He is completely liberated from any obligation to tell the truth and is a highly destructive propagandist whose public record of commentary about Iraq ought to disqualify him from decent company, let alone some sort of pretense to expertise about this war.

And there’s no reason to believe him on other foreign policy matters. The Kagans are truly horrible people.

Sure… that is, if you believe that Israel is our only ally. In fact, the reverse is much closer to the truth. The US is about the only ally that Israel has in the world, and right now the Israeli Far Right is taking special pleasure from spitting in our faces.

@Serolf Divad: The Kagans long for the good ol’ days, when America was exceptional and “[e]very 10 years or so, [needed] to pick up some small crappy little country and throw it against the wall, just to show the world we mean business.”

@Serolf Divad:
The Likudniks remind me of my late cousin’s bitch of a wife. Sell US weapons tech to China? Sure no problem. Take US money and not worry about US sanctions? No problem. Do whatever they want and run to the US when they over do it? No problem.

When the US actually gets offended and says a few mild critical words? Throw a major temper tantrum.

@blogenfreude: US America is still exceptional. Make no mistake. Because the rest of the world is convinced of it (perhaps not for long).

Are you, sir, somehow implying that Tom Friedman and Kagan are in cahoots? Be careful brother, because if you link two opinion-makers who happen to share views about how US America should DOMINATE THE WORLD (on behalf of Israel?), just by chance advancing Israeli geopolitical interests, and they happen to be Jewish, you, sir, will be accused of Antisemitism. Not to mention conspiracy theory.

(And please, people, I’m not one to care about someone’s religious tribal affiliation [to me it’s equivalent to rabid fandom for a Sport team]. I believe everyone on earth is entitled to as much or little as anyone else, and the fact that I feel the need to write this disclaimer is an indicator of how much AIPAC has strangled the US American “discourse” about anything relating to Israel.)

@Pedonator: speaking of tribal and religious affiliation on this 17th of March, I want to tell all of my Mexican-American brethren that as a person who has a plurality of Irish blood (and a maternal line of the most hilariously stereotypical Irish names), I feel their Cinco de Mayo exploitation by beer companies and Marina chicks pain.

@SanFranLefty: Yeah, isn’t this “holiday” supposed to celebrate the get-ridding of snakes or something? I mean, who would want to get rid of snakes?

But the Irish in me (perhaps 30%+) views this hallowed day as just another excuse to get drunk, so I’m good with that.

The only green I wore today was in my socks, hidden from view of every co-worker I’d like to have had a pinch from. So this holiday = no fun.