John McCain Accused of Being a Nerd 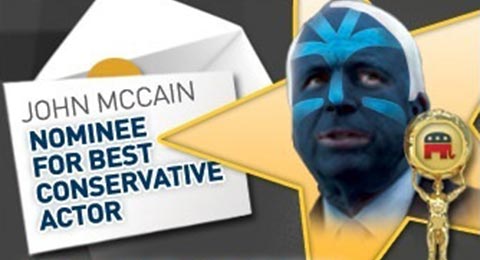 Slow day, unless you want to argue whether the Pentagon shooter was a deranged wingnut or a deranged moonbat. So, in anticipation of Sunday’s Big Event Which Has Nothing To Do With Sport, we’ll note that J.D. Hayworth is mocking John McCain for enjoying Avatar too much. Or something like that.

This blog post on a conversative blog is hilarious, especially for the whining about a McCainer calling Foghorn an “A$$H*L3” on his Facebook page.

Finally got out of the hospital today and their shitty overpriced internet (I didn’t use my Macbook for five miserable days and had to use the lousy hospital supplied one.)

Didn’t eat much at all. Not missing Jello, over sweetened juice and crappy broth. Going to miss everything else as over the next two months I have to rebuild my digestive tract so I’m going to be eating very bland food for a while. Will miss beer and real Mexican tacos, but not that much as I don’t want to go back to the hospital anytime soon (or ever).

Now going through the Morphine withdrawal sweats and stopped having bizzaro dreams. Look forward to going to sleep and not woken up by code blues or nurses looking to take my vitals.

Staying at my parents and using my sister’s Wifi connection for the week. Thanks mom.

@ManchuCandidate: Morphine … Schedule 1 man. What else is there to say?

@Dodgerblue:
Shockingly, no I won’t.

On the other hand she won’t miss me and my vivid subconscious descriptions of riding the dragon.

@ManchuCandidate: Ugh. Give a shout if you start scheduling your days around Oprah and Wheel of Fortune – we’ll send the Mounties.

@Nabisco:
No cable at the parents house. I want to get home ASAP though.

@Benedick:
Heh on your comment about my dreams = GOP.

I like eating tofu, natto, soy bean sprouts and beans in general (except Kidney beans), but I just happen to like eating meat more.

@ManchuCandidate: Call Time Warner (or whatever you have up there) pretend to be your dad, and get it put in ….

They’ll thank you once they discover Weeds.

@blogenfreude:
I can live without the glass nipple for a week, I think. Besides my dad hates Rogers Cable so much.

I have Wifi and access to a whole bunch of games.

And now I remember – the first time I landed in Canada City, Rogers offered me a package right over my cell phone. I took it – the law firm was paying. You Canadians are more capitalist than you admit.

We are capitalistic, but we’re just merely polite about it…

@ManchuCandidate: I think Canadians were nicer to me than Belgians, but only by a bit. email me … i have a question.

@ManchuCandidate: We are capitalistic, but we’re just merely polite about it… “Can I offer you a noose to hang yourself with, sir?”

@blogenfreude: Precisely what I was thinking. I’ve only seen up to Season 2 of “Weeds”, trying to find the box set on the local gray market.

@Nabisco: Just Netflix it … totally worth it.

@blogenfreude: I’m not sure Netflix delivers to Nepal, or wherever he is.

@nojo: @blogenfreude: I could get them sent through the dip pouch, but that pipe appears to have been clogged ever since the annual swimsuit issue of SI was mailed – and not delivered. I only care because of the Olympics coverage – and the annual Jimmy Buffet bon not.

I could try and stream it on netflix, but if my attempts to keep up with the DS is any barometer, it would take me five hours to watch one episode. Ever try to follow a Jon Stewart monologue in fifteen second increments? Maddening!

That is a musical theatre/porn reference and tho it’s not ALW I bet noje, as a self-respecting almost gay man will totes get it.

@blogenfreude: Wait. Belgians were rude to you? WTF? Did you not eat the fries? Did you not smoke the fags? Did you not drink the bierre? You have actually been to Canadialand I take it? Belgium is the Seattle of Europes.

@Nabisco: OMFG, we just finished Season Five of Weeds on DVD the other night on vacation and are jonesing for more. You MUST catch up. Not to mention that Mary Louise Parker has been my lesbian movie girlfriend since Fried Green Tomatoes.

Season Four is when the show almost jumps the shark, but you must get it. MellBell somehow magically hooked me up with Season 2 of Flight of the Conchords as soon as it appeared on the fancy cable teevee, so if you can’t get Seasons 3-5 ASAP through Netflix/State Dept Pouch then I will recruit Sister MellBell for this project, or at least have her talk me through the logistics of burning DVDs for you.

@Manchu: Feel better soon, dude and congrats on getting out. Hope you get to your home by Monday.

@Benedick be Jackpot: I bet noje, as a self-respecting almost gay man will totes get it.

Alas, “Hello, Love” rings a very muffled bell. I can sorta feel it, but I just can’t recall it.

@SanFranLefty: Just picked up seasons 3 and 4, seven discs total, for a whopping $12. They caved on the final three bucks because I “needed cash for a ride back home”. I love haggling over prices.

I may have missed a few shows from season 2 – I turned Ma Nabisco on to the show and we were at least halfway through the season when I shipped out. Agreed on MLP, total dream babe – just her voice makes me swoon.