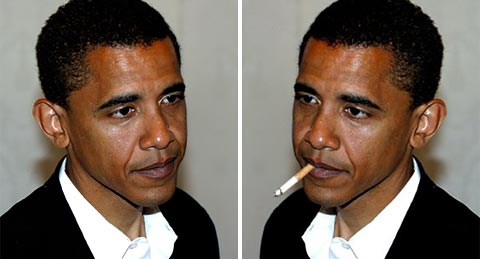 Much to our consternation, it turns out that our favorite Obama photo — Smokin’ Barry — is a fake.

On the other hand, much to the hoaxter’s consternation, the fake backfired.

Presuming, of course, that the intent was to discredit Obama before a nation of Rob Reiners. Because the doctored photo actually endeared Obama to a nation of exiled sidewalk smokers. Hey! He’s one of us! Or if not quite one of us, one of our Blue Note album covers! Close enough!

Sure, Barry can’t bowl for shit, but at least he can handle his Camels. And that’s all we ask.

Yes, dear, and that’s why we love you. Because you believe, you big lug. That fag is so obviously not in his mouth I’m surprised it didn’t show up on Photoshop Disasters.

Meanwhile, I’m pleased to report that the New York Times entirely misses the point yet again. In an account of movie editing and its effect on the brain that manages to be completely uninformed and yet at the same time reaching for insidery hipness only to FAIL. Indeed, this writer is so clueless I’m surprised she isn’t part of their theatre dept. I supposed it can only be a matter of time before they send her to ‘review’ the latest Sondheim.

give the guy a break. let him have his fags.

Tommmcatt Say Relax
did you see that he won?

/TJ/ Don’t forget that today is the day the Supreme Court says guns for everybodeeee, first and foremost Chicago! Another great day for the city that can be identified worldwide by pantomiming a machine gun Capone-style.

@flippin eck: Will it help the Cubs make it into the World Series?

Yes, I’m very proud of him. He’s talking about leaving the mouse for Dreamworks, though. He’s not very happy with Marketing’s influence on content there…

@Capt Howdy, Tommcatt: Congrats to Mr. Catt. I shall lift a toddy to him later (sick day for me).

@flippin eck: I think people should be able to arm themselves for home protection without applying for a permit if they so choose.

The MSM are pretty oblivious, no?

As for me? Well, it turns out that my body doesn’t really like being cut open. Suffered complications wth a seriously distended belly and bloating till the doc ordered an ND tube shoved up my nose to my gut.

I was never so happy to vomit for 5 minutes.

Haven’t eaten anything in 6 days, but I don’t mind yet. Got me a moriphine derivative as they pulled the epidural. I’ll miss it.

Good to hear from you, dewd.

@redmanlaw: I can respect that, but statistics overwhelmingly bear out the fact that a gun in the home is much more likely to be used in a suicide or accidental/intentional homicide of a family member than for the justifiable homicide of a home invader.

I say outlaw handguns. Less chance of making a mistake with a rife.

@Tommmcatt Say Relax: Unless NPR has their facts wrong, Chicago allows long guns in the home. It’s hard to imagine a much more effective deterrent than the kerchack noise of a pump shotgun being loaded. It says, “leave now, before medievalism occurs to you in very unfortunate ways.” That said, my home defense weapon of choice is pepper spray. Anything that can’t be handled by that is a situation where I run away, quickly.