Stinque
Home Latest Comments Log in
If it smells, we’re on it.
Stinque
Cassandra was right.
Gotterdammerung

Jesus is More Cool Than You’ll Ever Be 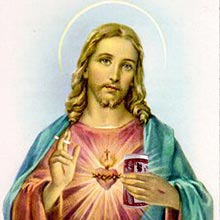 The government in the Indian state of Meghalaya has confiscated textbooks showing pictures of Jesus Christ holding a cigarette and a can of beer.

The book has been used for primary classes and has caused a furore in the north-eastern state, where more than 70% of the population are Christians…

The controversial picture of Jesus was discovered in cursive writing exercise books being used at a private school in the state capital, Shillong.

As it happens, that particular image is not hard to find online, which makes us wonder whether there’s an innocent mistake involved — we could easily insult Hindis or Muslims if we weren’t paying attention.

On the other hand — dayum. Now there’s a dude we could have a conversation with.

What the hell are they gonna do when they find out he was gay?

@flippin eck: Speaking of the Denton empire, Gawker acquired some blog and as part of the deal shitcanned Gabriel Snyder, the EiC who had put it back into shape.

This Jesus picture thing is like the Mohammad cartoon furor without the fatwas.

@SanFranLefty: Was thinking he was the same Gabe who penned the sadly defunct The Unethicist, but apparently that’s someone else. Honestly, the only Gawkerite I’ve ever followed is Pareene, and only because of the Wonkette connection.

Speaking of redemption, the men’s Super G event might be interesting tonight. I’ll miss the primetime coverage because I’ll be watching Henry Rollins do his thing in Albuquerque. I’ll let you know what he has to say about the plane crash, etc.

@mellbell: If anyone, anywhere knows Gabe, he has an open invitation to revive the Unethicist here. That was the only thing that kept me reading Gawker after I lost interest in everything else there.

Meh, AMC’s since discovered her inner neocon. She’s no longer the wonkette we thought we knew.

@redmanlaw: But how can you stand how they ripped off Mott the Hoople?

@flippin eck: But I would still so hit that.

@Original Andrew: I speed-read the link, but I didn’t catch the neocon angle from AMC, just the tone of mainstream, which I already expected. Quote(s)?

(Or, do you mean mainstream is the new neocon? That I can believe…)

I’m sick of this. I want new politicians to mock. We deserve better. The current bunch is merely beneath contempt. I want contemptible back!

@Benedick: I may answer your prayers in the morning.

@Pedonator: What I have is so fucking awesome, I’m not sure I can do justice to it. I may spend the next hour just recovering from the discovery.

@nojo: You are evil.

And don’t you know you’re supposed to drop bombs at the close of Friday? Saturday morning totally sucks.

@Benedick: Contemptible is better than beneath contempt? ‘Cause I’m ready to go either way with the entire bunch/system.

@nojo: I’m sure you’d be a better Senator than either of the whores we have now. I’ll vote for you.

/ducking misogyny accusations — boys can be whores too you know/

That’s the other surprise: Apparently I’m running in Utah.

@Pedonator: Good point. I’ll need to include a reference to that. The home crowd eats it up.

@nojo: I will wear my I (heart) Mormon Boys t-shirt to your inauguration.

So while I’m working on my campaign statement, I’ve got a 1939 movie on the tube with a bunch of cute babies. I wonder how many of them are dead now?

@Promnight: And Squeeze, too, ese from “Pulling Mussles from the Shell.”

@ManchuCandidate: Fucking awesome. Three hours without a break. He was just in Sri Lanka where he flipped off the Burmese dictator and turned a kid on to a hard drive worth of tunes.

@redmanlaw: What? Hank didn’t call? I have no idea where to learn about visits such as those…

@Nabisco: Dude just slipped in on one of his see whazzup road trips. He also had a state department guy he knows give him a sweet hookup with a “roadie for princes” guy in Saudi Aribia.

@nojo:
you have my vote, comrade.
i do the same thing with dogs! when watching old movies with dogs in them, i ALways think, they’re dead now. we are so weird.