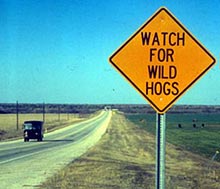 We’ve often wondered why South Carolina seems to have more douchebags participating in its political class than other states. It’s not like douchebags are a rare commodity among politicians — especially among Republicans — yet when you need a go-to douchebag to brighten your day, often as not the Fightin’ Palmettos will glow where the sun doesn’t shine.

How can this be? Well, after flippant juxtaposition careful research, we have an answer:

The Palmetto State is home to the nation’s sixth-largest population of wild hogs, many of which are hybrids of domestic pigs released into the wild and Eurasian wild boars released by hunters in the early 1900s.

South Carolina has 90,000 to 280,000 wild hogs, according to Jack Mayer, a feral-swine expert at the Savannah River National Laboratory in Aiken. Mayer said the population estimates are so varied because the pigs often live in dense forests and isolation, making them difficult to count.

Far be it from us to correct the experts, but we suspect there’s easy counting in Columbia, near the corner of Gervais and Assembly. Just look for the Stars & Bars.

So what’s your thesis? Maidens walking in the forests are seduced by feral pigs lurking therein and subsequently spawn reactionary psychopaths who run for public office?

The linked article (on the Stars & Bars) has some truly comical moments. My favorite was when Cooter asserts that the flag “did not have a racial component until the 1960s”. Wow.

@FlyingChainSaw: Nojo is satirizing the “logic” of the masses. They simply have no concept of logical operators, juxtaposition is all they have, simple juxtaposition is “logic” to them. Like “you are a poopyhead.” No logic, just “you” juxtaposed with “poopyhead.” Obama and Socialist. “Nazi” and “Communist,” they must be the same thing, they are right next to each other in that sign over there. “Old Milwaukee” and “Swedish Bikini Team.”

Its kinda like sympathetic magic, “Cave Bear is strong, I paint cave bear on wall of cave, I be strong too.” ” Number 7 drive car fast, number & is strong, I put Number 7 on my pickup, I be strong, too. Grunt.” Me wear Saints Jersey, me champion.

the good ole boys are freaked because they misread the story as a rise in Federal Pigs.

@FlyingChainSaw: Did Deliverance take place in South Carolina? Maybe that would explain the “squeal like a pig for me” aspect.

@Prommie:
Tennessee I believe. but squealing like a pig is a regional past time.

@Benedick: I read that this morning, linked from a friend on FB. He sounded freaked out about it. It’s hard not to scoff at how seriously the Times is treating the poor impotent idiots of the Teabag movement. Wake me up when they’re nationally organized and actually having any effect other than splitting the Republican vote into a zillion tiny pieces.