Stinque
Home Latest Comments Log in
If it smells, we’re on it.
Stinque
Lovely day for a Perp Walk.
Pissoir d'Amore 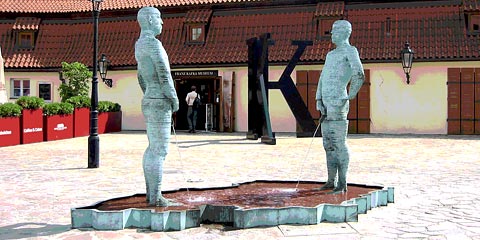 “I told him he was full of shit is what I told him. And then he gave me the Dick Cheney f-bomb the same way Senator Leahy got it on the Senate floor. I told Robert Gibbs, I said, ‘I’m sorry you’re swearing at me, but I’m just trying to help you out.'”

Gibbs adds that he demanded Schultz tell him “why he’d tell his viewers something so completely and knowingly wrong in an attempt to get people to watch his show.”

No, we don’t watch the Ed Show either. But if we’re not getting healthcare reform, at least we’re going to enjoy the pissing match.

Who is this Professor Doctor Abdurrahim Vural in the banner ad, by the way?

Ed Shultz is the personification of the word “bloviate”. Even more so than Rush Limbaugh, which is saying something.

@Tommmcatt Say Relax: I think I made it five minutes into one of his shows. Or maybe it was really sixty seconds and just felt like five minutes.

I think you should name the cat Stinquer. He (she?) could do guest posts when Yoda Pez isn’t feeling up to it.

And am I supposed to know who is Ed Schultz? Have never heard of him, but I try to avoid all the gasbags but Keiff Oh, and even he irritates me 50% of the time.

@Tommmcatt Say Relax: But I thought they weren’t socialists and were all for free market capitalism?

Query to the Universe/
Why do so many moms and Barack Obama want me to whiten my teeth, go back to school, and lose my belly fat? If I see one more fucking ad – whether it’s on Politico, HuffPo, the Ess Eff Chronic, or the El Ay Times – that tells me this, I am going to turn to violence.
/random thought upon following Karen’s linque

Hey @nojo, this is for you and the Duck alumni society:
U of O engraved MacBooks.

Schultz is a douche but he is a populist douche.