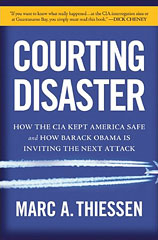 Title: “Courting Disaster: How the CIA Kept America Safe and How Barack Obama Is Inviting the Next Attack”

Blurb: “As chief speechwriter for President Bush, he was given unprecedented access to some of the most sensitive intelligence our government possessed on al Qaeda terrorists… What he reveals is a shocking, thoroughly documented account of just how close we came to suffering follow-on 9/11 attacks, how so-called ‘enhanced interrogation techniques’ (including waterboarding) were directly responsible for unearthing the actionable intelligence that foiled them, and the extraordinary measures the Bush administration took to stay well within the bounds of what was not only legally but morally right.”

Review: “It is no accident that we haven’t been attacked since 9/11.”

Customers Also Bought: “God’s Battalions: The Case for the Crusades,” by Rodney Stark

Footnote: “It’s not even the end of inauguration week, and Obama is already proving to be the most dangerous man ever to occupy the Oval Office.” –Marc Thiessen, January 23, 2009.

If he was a speechwriter for Bush that’s good enough for me. When does he join Fox?

Can somebody explain to me why a fucking SPEECHWRITER gets access to all this classified intel? Apparently, nobody’s given the Dems on the Intelligence committees access to the double-secret SPECTRE al Qaeda files…

The whole blurb reads like a quote from “The Power of Nightmares”. Bizarre.

On a somewhat unrelated note, my state (Ohio) has apparently already lost its mind. Recent polls show the Rethug candidate for governor (TPM named him “the teabaggiest Repub” a few weeks back). Apparently, the average Ohio voter has the memory of a goldfish and so doesn’t remember how we got into the current financial clustefuck – Repubs slashed income taxes when times were good, spent all the “rainy day fund” when it was sunny, and then absolutely refused to allow anything *resembling* a tax increase through the legislature. I say “resembling”, because we had a massive legislative tiff about *delaying* a previously planned income tax cut, which would have further shredded an already fucked-up budget.

I wonder if he put his hood back on *right* after the speech, or if he waited till he got home…

@al2o3cr:
It’s from being in the closet for so long.

As for the post, sorry but the 9/11, ignoring August 01 memo, letting Osama go at Tora Bora, invading the wrong country… yeah, GOPers are real good at terrwism.

Sad thing is most Americans probably accept this reasoning.

Wow, and then there’s this:

Instead, he said, the government should place incentives in its welfare programs, such as providing child care so parents can work or receive education so they can break the welfare cycle.

A slip of the tongue? Is this like Bill O’Reilly endorsing the public option without realizing it? Because free childcare would undoubtedly be one of the most effective methods of getting poor people back to work and back on their feet. I wonder how long it will take for his opponent to attack this porposal as a “vast expansion of government” and for Bauer to walk himself back from this statement?

@Serolf Divad: Hell, with all his comments on the poors and the stray animals “breeding” he was almost making the case for increased funding for Title X (program that funds family planning/contraceptive services) and lifting the Hyde Amendment ban on Medicaid funding of abortion.

@al2o3cr: I wonder how many stray animals Bauer has encountered at the highway rest stops.

Just wanted to let you kids know of a very bad, rogue anti-virus software attacking peeps computers. Mine was attacked at about 2 am this morning, and a friend I contacted to warn had been attacked moments earlier.

No matter how careful you think you are, it can happen to you. I am proof of that.

@SanFranLefty: I think he had something more like Sen Coburn’s stealth sterilization program in mind. (For those unfamiliar with Sen. Dr. Coburn’s work as an OB, he sterilized some Medicaid patients without their consent. Too lazy to look up linque right now).

The thing that struck me is that he’s trotting out the same language that was used to slash most of the cash assistance programs *last time*, during the Contract On America years. Apparently, the hard time limits and work requirements just aren’t tough enough.

I’d also love to see a reporter pin him down on why the big banks should get bailed out without paying serious $$$ for it. After all, don’t they “owe something back” as well?

I’d also be interested to see if *he* could pass a drug test. Maybe a polygraph to see if he’s been “walking the Appalachian trail”, if you know what I mean. After all, he’s living off the government as well…

Housekeeping notes: Looks like the CP domain automatically renewed again for another year.

I was tracking it closely a year ago, ready to swoop in if it expired. This year I was mildly interested, just to keep our collective history in order. Next year? Zzzzzz.

Hey, the comments disappeared before we left, the site itself disappeared months ago. All that remains is the Wayback Machine.

Love this mobile mode.
Looks like the Jets season is about to end.

@Dodgerblue: Stinque Mobile is still technically beta, at least until they release a version that’s easy to hack. (It’s promised soon.) I like it myself, but there are some nuances I’d like to tidy before making it the iPhone/Crackberry default.

@karen marie: My office computer got hit by “Antivirus Live” which shut it down with pop up windows from pron, Guardian Angel Network etc. Even after the tech guy runs the malware remover from Malwarebytes (Get it? Those funny geeks.) it left behind reloaders or opened the door for other viruses that hijack my search engines so I get redirects to other (fake) search engines. One of the sites whose name whips by is some Russian site that’s a known source of viruses.

My mother in law’s computer got hit by “Desktop Defender 2010”, which behaves very much like “Antivirus Live”. They both send out popups that look like McAfee or another antivirus program’s warnings. I guess by the time you see those, it’s too late. Local indy geeks removed it less way less than Best Buy, which wanted $200 to do it.

Virus? Can’t we all just switch to Macs? *dodging bottles thrown at smug*

@nojo: God I love it when you talk geek. Me no comprende. But it makes me wonder how you’d look in a pair of low-slung jeans and not much else but sweat. Pretty damn fine I reckon. Forget CP. You can Stinque right here, cowboy.

@Benedick: I was really, really tempted to post “What’s malware?” and sign it Original Mac user but was afraid that’d be adding insult to injury.

@Benny, SanFranLefty: If more than 4 percent of computer users used Macs, it might be worth someone’s time to write a iVirus. Obviously, russianmafia.com has other priorities. Also, I am not paying 3x the cost of my Dell for a computer for myself, although I did get Mrs RML a MacBook last year because she’s one of “those people”.

@redmanlaw: Took an hour and a half to remove Desktop Defender from my computer the other day, making me late for work and very cranky.