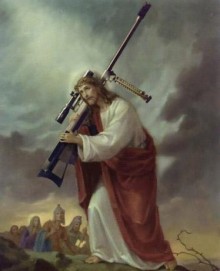 What do we have to do to purge this Bush nonsense from the system?

Coded references to New Testament Bible passages about Jesus Christ are inscribed on high-powered rifle sights provided to the United States military by a Michigan company, an ABC News investigation has found.

And who uses these high-powered sights?

The sights are used by U.S. troops in Iraq and Afghanistan and in the training of Iraqi and Afghan soldiers. The maker of the sights, Trijicon, has a $660 million multi-year contract to provide up to 800,000 sights to the Marine Corps, and additional contracts to provide sights to the U.S. Army.

Hi!  We’re from the US, and we’re here to help, but your religion sucks!

Religion will be the death of all of us, and not just one religion – all of them.

you cant make this shit up.
really

also
what the fuck and in whos twisted mind does this have to do with rifle sights?

a reference to the New Testament book of John, Chapter 8, Verse 12, which reads: “Then spake Jesus again unto them, saying, I am the light of the world: he that followeth me shall not walk in darkness, but shall have the light of life.”

@Capt Howdy: You need decent light to shoot ragheads, no?

Surprise! Our military knows nothing about it.

So, a question is whether this is better or worse than offering bullets with a little bible reference cast into each one. I certainly hope such a thing doesn’t exist, but that was the first thing I thought of (along the lines of “that bullet’s got my name on it”).

So do we now get to snicker at the notion that Christianity is a religion of peace, like the right-wingers have been doing about Islam for the past 8 years?

“If Trijicon sells their optics to me cheap, I can probably find it in my heart to forgive this affront to my atheism.” commenter at saysuncle.com

Although I don’t own any Trijicon optics, I do a lot of reading in this area and have never come across any mention of the Bible references in all the various articles, reviews and shows I’ve seen. Seems like it just blew up in the last few days in gun and shooting blogs. Origin: don’t know.

The coasts simply have to secede. The pigfuckers will be helpless, they don’t do finance.

I’m a little distracted, its now 5 weeks of constant, nasty back pain for me. I’m more than grumpy. Here’s my tweets on the news of the day:

Fuck massachusets, the house can just approve the bill the Senate already approved, and its over, fuck this doom-crying and hair-shirt wearing.

Brett Farve maybe was the one who was right, maybe his offensive line got too old, and not him, maybe I kinda like it a 40 year old dude who is obviously just a big kid simply knew he could still play, he made a mistake listening to the assholes who told him to leave gracefully, and good for him he changed his mind. I never liked him before, but I like him now, because what he is doing is a great big fuck you to the sportswriter never-played-the-game douchebags who unanimously declared him over and criticized him for wanting to keep doing what he obviously still does well. I am an old now, myself, and I like it that there is still someone playing football who is at least in the same decade I am.

The US of America can no longer do anything right, because we is have become a nation of lawyers, every single little fucking thing has to be lawyered, and anything that could result in a lawsuit, which is fucking everything, is forbidden, and any proposal for action, even while people are dying beneath rubble, is being held up by this lawyering bullshit.

I don’t believe in that “kill all the lawyers” anarchistic bullshit, but maybe we kill half of them?

I got an MRI today, first time for me. What the fucking fuck? I felt like a fucking tampon.

@Promnight: I smacked the shit out of my shoulder when I had a high speed crash while skiing yesterday. I could barely put my jacket on today. Hope it’s nothing serious.

@Promnight: Back pain sucks. Hope they can find you some relief soon. I have to do the open MRI because I freak out so badly in the enclosed ones.

@Mistress Cynica: I’m grumpy. I went to the State department website Saturday and downloaded the info and practice test for the Foreign Service exam, my stepdaughter wants to take it, I am trying to help her. I answered 30 questions before I got bored, I got them all right, do they hire 50 year-old crippled alcoholics?

The only fucking thing I have ever been good at in my life is taking fucking tests.

Seriously, now I know what tampon feels like, on insertion. I am going in, and I said “whoa, I never had claustrophobia before, but I never did this before,” they stopped and asked me if I was alright, never heard a fucking joke before, I guess.

@Promnight: No, they won’t hire you, because even if you get a perfect score on the written part, you have to do the “oral” exam which consists of alleged- role playing with douchebag date-rapist graduates of Georgetown’s School of Foreign Service where you stand up and curse them out. //Why am I using second-person tense?

And MRIs suck. I’ve done several of them. While in law school (to continue a thought from another thread) I volunteered for all sorts of medical tests, and therefore I have been in MRIs at least five different times – only one of which was for my own medical need.

@redmanlaw: Dude, be careful with the shoulder. If it’s janked out fix it now. I waited seven years to fix a fucked up shoulder – it got to the point where I would separate it when I put on a shirt or rolled over in bed in my sleep. It was too late by the time I got it fixed. It still pops out of the socket, but now it’s harder to slam it back in to the socket post-surgery.

Michigan, my home state. Of course. *sigh* Obviously the hottie D&B boys were not enough to make it through the news of the day…I’m off to find pictures of bunnies cuddling with orangatans or something…

@SanFranLefty: The MRI was not bad, after I got over the suprise of what it was. I could have fallen asleep, about halfway through I got into a mindset like I was in a sensory deprivation tank or something, and it got kinda enjoyable, in the sense that these days, anything, absolutely anything, that is a break from the day in, day out grind of getting up, going to work, sleepwalking through that pointless grind, driving home, dealing with home life, and going to bed, and starting over again, anything thats “different” is kinda nice. Now I know what its like to be shoved up into a white PVC sewer pipe and have to lay there motionless while someone jackhammers nearby.

And I could feel it. You can’t feel an X-ray, but I could feel the fucking thing fucking shaking my molecules, I could feel little twinges like mild electrical shocks.

And again, that just made it a better than average day, cause something different happened.

@SanFranLefty: I had that too, the shoulder thing. Adios my throwing arm.

@Dodgerblue: Yeah, and it’s not cute when you’re trying to reach back into the back seat to grab the dog, or you’re getting off the boat on the Colorado River and the shoulder goes all janky on you. Plus by the time you pop it back in the socket, you have 12 hours of nerve damage that makes it loopy (see, e.g. McCoy, Colt, and spearing shot of his right shoulder)

@SanFranLefty: I feel like I should immobilize the shoulder for a bit just for comfort. Def. gotta law off the upper body weights this week. Cardio for the duration, ‘cept I won’t be walking that part of the local trail where a couple of thugs shot a guy in the arms after taking his pocket change.

The snow is making the tv picture jump a little bit, but it’s time to close the Westlaw and head for bed anyway. Two hour delay tomorrow? Probably not, but we’ll see.