Stinque
Home Latest Comments Log in
If it smells, we’re on it.
Stinque
Miscellaneous Top Secret Documents.
The Stupid 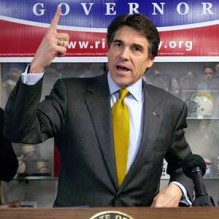 The state of Texas, not content with nearly destroying the world when it sent us W, now wants to make our children stupid:

The conservative bloc on the Texas State Board of Education won a string of victories Friday, obtaining approval for an amendment requiring high school U.S. history students to know about Phyllis Schlafly and the Contract with America as well as inserting a clause that aims to justify McCarthyism.

Outspoken conservative board member Don McLeroy, who reportedly spent over three hours personally proposing changes to the textbook standards, even wanted to cut “hip-hop” in favor of “country” in a section about the impact of cultural movements. That amendment failed.

And because Texas is such a large state, the textbooks used there often make their way into the rest of the nation’s schools.

The board also voted to delay further debate on the nationally influential standards until March, with a final adoption vote now scheduled for May.

And what sort of abominations does the Lone Star State have in store for us?

The winners write history – are you telling me these idiots have won?

are you telling me these idiots have won?
not yet but we are on the mat for the count

By the time these yahoos get done with the history standards, the book will need a “For Entertainment Purposes Only” warning sticker.

Also funny: I have no doubt that Mr. McLeroy had his panties in a proverbial knot about Obama “indoctrinating schoolchildren” in the classroom message earlier this year. IOKIYAR indeed.

in case you need some perspective on your “problems”

Streets Full of Bodies in Haiti

So glad I got my public school edu-ma-kashen in Texas pre-rise of the Christofascists. Kind of like how my folks are glad they got their public school and university edumakashions in California pre-Prop 13. Mr. SFL was in school when it passed and he says it was remarkable how from one year to the next they went from having paper and pencils provided by the school to having to bring their own (I laughed because my schools never provided supplies). Of course, nowadays, the students in California have to bring in rolls of toilet paper to stock the bathrooms.

@Capt Howdy: Huh. I’m taking the exact opposite tack against all the doom and gloom news today by posting this delicious collection of man-flesh to cheer up the girls and gays, and this photo of Halle Berry at last night’s Golden Globes for the st8 boys. And I will go find puppy pics if needed as well.

@flippin eck: Oh my, you could cut diamonds with the cheekbones of a few of those D&G models. And I’m a str8 woman and I salivate over Halle Berry. Thank you!

@flippin eck:
yum
with a side of whipped cream please. your way is better.

I was thrilled that both M.C. Hall and Lithgow won for Dexter last night.
but very sad to learn that Hall had cancer.

@flippin eck: Puppies and kittehz may be required before the day is out if the stoopid keeps coming this hard.

@SanFranLefty: Spend the 15 minutes to watch the runway show video when you have a chance. You’ll thank me.

@Capt Howdy: Oh no! I wondered about the hat.

@Mistress Cynica:
supposedly its treatable and in remission.

@flippin eck: Have you met SFL? There is a resemblance to Halle Berry, but SFL is not crazy.

@Dodgerblue: ha ha ha. Can I have some of what you’re smoking?

@flippin eck: I will go find puppy pics if needed

You mean besides Halle Berry?

@flippin eck: @SanFranLefty: @Mistress Cynica: Wow. Why can’t we get some of that on Project Runway? And as much as all of the guys are teh HAWT, the clothes are also fucking amazing.

@homofascist: Granted one of those D&G tanktops will probably cost $175, judging from the one time I went into one of their stores and had a heart attack at the prices. True story – a few years ago I took a former client of mine to see Rodeo Drive, and God love him he would go into all the stores and try on clothes. We spent two hours at D&G, we left when I was afraid the pissy French queen who was watching us with an eagle eye was going to call the Beverly Hills PD on us for shopping while black and poor.

In re Halle Berry: I’d hit it. Thank you, thank you, don’t forget to tip your waitstaff, they work hard for the money.