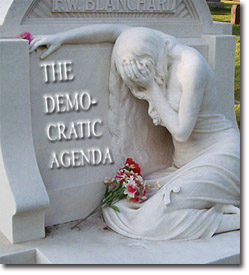 On the eve of what could become a crushing defeat for Democrats in Massachusetts (a defeat that just a few months ago seemed as inconceivable as Dennis Kucinich being elected Senator in Alabama) and just one short year into the Obama administration’s tenure, Nobel Prize winning economist Paul Krugman offers up a postmortem on the Democratic agenda that’s as sad as it is likely accurate. In essence, Krugman accuses the Administration of timidity, lack of conviction and a perplexing desire to eke out compromise with an opposition party whose utter intransigence is born less of ideological cause than of a simple desire to see the Democrats fail:

Lately many people have been second-guessing the Obama administration’s political strategy. The conventional wisdom seems to be that President Obama tried to do too much — in particular, that he should have put health care on one side and focused on the economy.
I disagree. The Obama administration’s troubles are the result not of excessive ambition, but of policy and political misjudgments. The stimulus was too small; policy toward the banks wasn’t tough enough; and Mr. Obama didn’t do what Ronald Reagan, who also faced a poor economy early in his administration, did — namely, shelter himself from criticism with a narrative that placed the blame on previous administrations

And while I personally believe that Krugman places too much blame on the Obama administration for the sad state of the Democratic party today (let us not forget the destructive shenanigans of Joe Lieberman and the blue-dogs) there can be little doubt that much of Krugman’s criticisms ring all too true.

The administration’s Achilles heel has proven to be the distressingly high unemployment numbers. And while economists like Krugman himself were warning of the possibility of unemployment as high as 40% if a robust stimulus package were not passed –a fate the Obama administration can be credited with avoiding despite the best efforts of the opposition party– even today’s comparatively mild 10% unemployment represents a crushing burden for millions of unemployed Americans struggling desperately to make ends meet. This could have been avoided, Krugman states, by passing a larger stimulus package in the first place.

Krugman is clearly disappointed in the course that the present administration has chosen to sail. His endorsement of Hillary Clinton during the primary season was based largely upon the belief that she would be a more muscular leader, less obsessed with pointless “reaching across the aisle” and more concerned with pushing through a robust Democratic agenda.

It’s difficult to say whether Clinton would have proved any more forceful a figure than Obama (like I said, Krugman largely ignores the spoiler role played by some shameless, pathetic, opportunistic Democrats in the senate and underplays the role of the media, which has become little more than a GOP talking points echo chamber of late) but at the same time, one strains to remember a major pronouncement on matters political or economic these last few years on which Krugman has been wrong.

Can Obama recover? Let us hope so. Recall that many saw Bill Clinton’s fate as sealed after the failure to pass Health Care Reform in the early 1990s. And yet he managed to wrangle victory from the jaws of defeat, run a highly successful presidency, gain reelection and diddle pudgy interns in the process. So maybe there is still hope in Hope. I guess we’ll just have to see how this all plays out in the end.

I wonder if she loses that in any way increases the chances they will do some sort of reconciliation thing? which could end up being a good thing.
they could get a helluva lot more with 51 votes that with 60.

To the Clubhouse Stinquers. Nabisco got some really bad news.

question.
I changed my avatar long ago. why is it not showing up?

weird
its showing up in the little pics not the larger ones?

And so MA goes Douche?

@homofascist: And the rest of us?

@Benedick: Er, since it is his thing I would prefer not to be the blabber mouth. If he wants to reach out here I am sure he will.

can you believe I have made my living with these boxes for 25 years.

btw
that is my great great grandfather.

@Benedick: More details on what he referred to in this post.

@Mistress Cynica: Thanks Cynica. I looked back to see if he had posted something and didn’t see anything, but I guess I missed this.

Didn’t help that Obama surrounded himself with left-overs from the Clinton Administration and Goldman Sachs and jettisoned many of his progressive thinkers, especially on matters economic.

Hillbot wouldn’t have been any better because she would have been pulling Summers and Rubin out too. And where is this alleged ball-busting Rahm Emanual we heard so much about?

Didn’t help we had a pussy like Harry Reid in the Senate not challenging the Republicans’ “60 is the new 50” meme. He should have fought that bullshit from the start. You know how many federal judge appointments have been confirmed besides the Wise Latina? Three. Because the fucking Republicans in the Senate are invoking a procedural bullshit move to turn the most unrepresentative legislative body into a more undemocratic body that requires a super-majority to emit a collective fart. The supermajority requirement in California budget-passing has been such a stunning success, why not take it federal?

@homofascist: Speaking of MLK, some food for thought from him:

The church must be reminded that it is not the master or the servant of the state, but rather the conscience of the state. It must
be the guide and the critic of the state, and never its tool. If the church does not recapture its prophetic zeal, it will become an
irrelevant social club without moral or spiritual authority.

@SanFranLefty: I am fond of this one as well: ” A nation that continues year after year to spend more money on military defense than on programs of social uplift is approaching spiritual death.”

@Serolf: tip for future articles: “eke out.” To “eek out” is to shriek a little, or a geek-out without the G.

@IanJ: I think “eek out” is more appropriate for what may happen in Mass tomorrow.

@Dodgerblue: I’d think “wild-eyed railing against the unassailable walls of Fort Stupid” might be a better description, but what do I know.

Raining like a sumbitch here in LA. Hey Nojo, you guys afloat down in San Diego?

@Dodgerblue: Drizzly dry-ish by the airport — clear skies yesterday when everyone was holding umbrellas at the Globes.

We keep being told it’s coming, but right now it just looks like a typical overcast Eugene day out there.

Meh. I’m finding it hard to care. The Congressional Demonrats have been fucking that chicken since 2006, and they’ve been absolutely despicable.

The list is far too long for a blog comment–we all know what they did and didn’t do anyway–but creating the greatest theft/transfer of wealth to the rich in human history via the TARP fraud which catapulted our country from a dysfunctional right-wing oligarchy to a blatant, flat-out kleptocracy was really the end of the road for them.

heres a shithouse flower among the sewage per NPR:

@Original Andrew:
a defeat in MA could be their saving grace. its not to late to go to reconciliation and pass a health care bill that is good and effects people NOW.
they can. and if they dont I am not at all sure they deserve to maintain power.

ps
Joe agrees apparently:
Joe Biden, seeming to lay the groundwork for the case for moving health care legislation forward without 60 votes in the Senate, described the supermajority rule as a perversion of the Constitution.

“As long as I have served … I’ve never seen, as my uncle once said, the Constitution stood on its head as they’ve done. This is the first time every single solitary decisions has required 60 senators,” he said at a Florida fundraiser, according to the pool report. “No democracy has survived needing a super majority.”

No, the opposite will happen. The DC Dems only listen to lobbyists and the repulsive, sychophantic DC press corpse which tell them that they have to go even further to the right to win elections. They’ll say that even those gawddam commies in Taxachusetts are rebelling against so-sheelized mediseen, and the Dems will fold faster than a 24 hour laundry.

Mark my words, Nancy Pelosi will be writhing on the floor and speaking in tongues by 2012.

then they deserve to be beaten like a red headed step child in nov.

@SanFranLefty:“Didn’t help we had a pussy like Harry Reid in the Senate not challenging the Republicans’ “60 is the new 50″ meme.”

Don’t you think this is a teensy weensy bit disingenuous? Particularly when you consider that Reid did get the HCR bill that Black Eagle is pushing passed in the Senate, and the only obstruction to putting that bill on his desk is Nancy Pelosi and the very large Democratic majority in the House of Representatives. This bill could be law in a day, if only 218 of the 278 Dems in the house could see fit to vote for it.

@libertarian tool: health care reform is the least of it. 60 is the new 50 is applying in every fricking vote the Senate is taking.

the DOJ Civil Rights Division is intervening at the trial-court level in upstate New York in support of a 15-year-old who was cruelly harassed at school for being “effeminate,” and the school would not protect him. His suit under Title IX (which prohibits sex discrimination in public education) was filed by the ACLU. Discrimination on grounds of sexual orientation is not prohibited by federal civil rights laws, but discrimination based on failure to conform to a majority’s gender-stereotyping is covered.

@Dodgerblue: Send the Ark to the Pandas — the Deluge has begun.

@Dodgerblue: Well, “ugly” is a relative thing — it’s not like three feet of snow.

Plus, storms here don’t linger: That yellow band will pass through soon enough and dwell on New Mexico.

@nojo:
when you have weeks in the single digits you may get sympathy from me

@Capt Howdy: That, sir, is why I no longer live in Oregon.