Stinque
Home Latest Comments Log in
If it smells, we’re on it.
Stinque
Lovely day for a Perp Walk.
Sociopaths

It’s the GOP, It’s What They Do 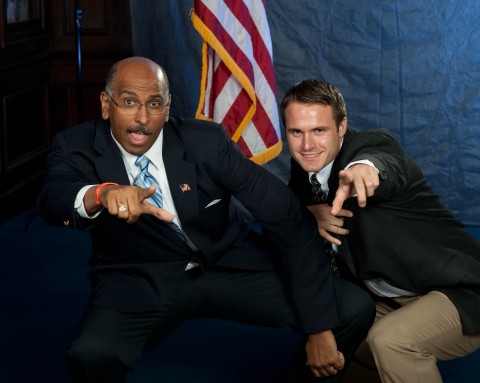 Senility, or straight up lying?  You be the judge:

Appearing today on Laura Ingraham’s radio show, RNC chairman Michael Steele said that he wrote his book Right Now before he became chairman. The problem is, the book itself doesn’t read like it could have possibly been written before January 2009 — it was clearly written in late 2009, either in November or December, and is based entirely on current events up to that point.

“I wrote this book before I became chairman. Because of the clock and the calendar, I wound up doing it now,” said Steele.

This is epic lying.

When we here at TPM heard that Michael Steele had a new book, we immediately bought a copy and I proceeded to read the whole thing cover to cover. Unless Steele is remarkably clairvoyant, it seems as though it could not have been written before he became chairman — it is overwhelmingly a commentary on the political situation in America under President Barack Obama, as of late 2009.

How much longer can this guy last?

Steele: ‘I Wrote This Book Before I Became Chairman’ (Uh, Really?) TPM

The fun part is that now they’re lying to each other.

But I still don’t see Steele falling on his sword any time soon, despite the backstabbing. His closest competitor has rejoined the whites-only country club that caused a few problems.

Then again — Steele followed by the whites-only dude would be rich.

This gets more awesome every minute.

Man, those photos of Steele and the interns do not stop being funny. It’s the gift that keeps on giving.

@SanFranLefty: Breaking hard — USC’s coach Pete Carroll rumored to be going to Paul Allen’s Seahawks for $7 MM per year for a whole buncha years — after a crappy season with the threat of NCAA sanctions looming. That’s the kind of class we’ve come to expect from USC.

This incident still doesn’t make a lot of sense to me. There are only really three possibilities I can think of to explain it:

– Steele doesn’t *know* what’s in the book. I’d have expected as much from Caribou Barbie, but this would be a surprise.

– Steele’s essentially a pathological liar who will say anything to anybody to make himself look good. Such a trait would certainly come in handy in Republican politics, but it doesn’t seem likely.

Could he perhaps have had his own private “come to Jesus” moment regarding the teabaggers taking over the party? Maybe after the “take back White America” signs started to appear? Could this latest outburst of teh stoopid be an attempt to discredit the party from within?

One can only hope.

Speaking of internal GOP dissent, McCain adviser Steve Schmidt to open a big can of whoop-ass on the Talibunny on 60 Minutes.

@Dodgerblue: I can’t discuss college football for a few days, it pains me too much. Well, I can discuss it long enough to say “Fuck U$C” and to laugh at this article about Texas Tech training techniques.

– Steele doesn’t *know* what’s in the book. I’d have expected as much from Caribou Barbie, but this would be a surprise.

I’m pretty sure that very few politicians write their own books. In fact, given how much of a goofball he is, I’d be surprised if Steele has ever opened the book except to sign it.