Butterstinque Set to Unleash a World of Cute 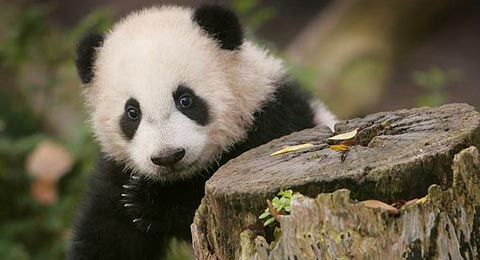 As a satirical semi-political blog, descended (via bastardy) from another satirical political blog, whose originator had a famous obsession with the National Zoo baby panda back in the Aughts, and since Stinque World Domination HQ is located about a mile from the Sandy Eggo Zoo, whose adorable captives recently squirted out another baby panda, we feel an obligation to celebrate milestones in said panda’s life.

Those we notice, anyway. We have a hard time paying attention.

So, for the record, Butterstinque, formerly Butterstick II, né Yun Zi, will be making his public debut today. We apologize for our lack of effusion, but unlike Ana Marie Cox, we’re not a girl.

I’ve often toyed with the idea of doing this to my poodle.

By the way, in case anyone’s interested, I appear to have pissed off Jonah Goldberg… yeah, ‘lil ol’ me.

BTW, I think that Jonah is probably the last person that should call anyone cliched, dopey or insecure.

Noj’, head down there with the old brass and glass and get some pictures of the creature for Stinque.com! Once you tell them who you are, they’ll likely want you to pose with him.

@Serolf Divad: Great. Take another crap on his face soon.

It would be better if they called the creature a poonda, which sounds much more obscene. Still, you should ask the dog first. If someone did that to me and I were a dog, I might eat his face in the middle of the night.

Pass the ButterStinque? That the assfucking may commence?

@Serolf Divad: Jonah isn’t ‘bright’ enough to get serious wingnut welfare (Hudson, Heritage) so they stuck him in the echo chamber at the NRO. Although he thought (and still thinks) that the Iraq War was a brilliant idea, he didn’t bother to fight in it – he’s never served in the armed forces. Easily fooled, he’ll be providing us with triple scoops of stupid for years to come.

@Serolf Divad: Way to get his undies in a bunch!

American fundamentalism arose famously in the woods of upstate NY at a place called Chataqua, spread through the various “revival” movements of the 19th century, and is a disease that always has festered upon the ignorance and anti-intellectualism of the frontier, and in the south, of course. In its beginnings, and to this day, it is closely tied to anti-intellectualism, the glorification of stupidity and ignorance, and the uniquely Amurrican rural character trait of proud, truculent, arrogant stupidity, the cause of which is the typical christ-tard’s belief that “there ain’t nothing’ I need to know that ain’t in this here good book.” The fact that Billy Graham preached in Shea Stadium does not make fundamentalism an urban phenomenon. Fucktard Goldbergh.

And, as always, his response is long on whine but short on serious rebuttal.

@blogenfreude: Unless she can get animals into the room with him, it will disappear beneath the waves of headlines and wheels of buses filled with chicks claiming to have pestorked him.

@blogenfreude: Someone named “Loredana” would have pretty low credibility even before she started to talk.

I hate that fucking picture! And the bamboo. Who the fuck came up with the idea that I like bamboo? Can someone in this shithouse make me a reuben?

@Butterstinquer: Welcome! And damn you for beating me to doing this!

TJ/A “must-attend” for all serious political thinkers. Check out the roster of speakers!!!!

@Tommmcatt is hunkered down in the trenches: You’re sure that’s not from The Onion?

@Butterstinquer: Could I interest you in a beet and fruit juice cake?

@mellbell: No. If you really cared you’d have a pizza and a steak bomb delivered here, not to me, the guards are always looking at me. Assholes. Send it to Linda in accounts and she’ll know what to do. She sneaks in sometimes at night and we make out, have pizza and watch ’60s rock videos.

@mellbell: Oh, yeah, and a ‘spack of Anchor Steam. I have the number of the liquor store that delivers here. Same deal with Linda.

@Tommmcatt is hunkered down in the trenches: OMFG! We need to take up a collection and send FlyingChainsaw to liveblog the event!!

Nojo, I’ll give you a dollar if you apply to the conference for press credentials for us.

@FlyingChainSaw: There was already some kerfluffle this morning over an apparent “Rachel Maddow” mailing-list signup. They’d probably smell “Stinque” a mile away.

At least one Bush White House lawyer may go to jail. From Gawker:

Former Deputy White House Counsel J. Michael Farren has been arrested and charged with attempting to kill his wife. He reportedly beat her with a flashlight, and she is “lapsing in and out of consciousness” in a hospital. George W. Bush brought in Farren in 2007, when his administration faced a whole lot of investigations and subpoenas. Farren previously had worked for George H. W. Bush and in Reagan’s Department of Commerce.

ADD: The local rag has the gory details, including the fact they have a 6 yr old and a 4 month old who were no doubt present while daddy tried to beat mommy to death.

Man, how ugly is that? Disgusting.

@Mistress Cynica: I just saw that. What an asswipe.

I coulda been a contender? Damn! That goes on my “serious regrets” list.

@SanFranLefty: Goddammit! We should have used the Bomb on the Hun when we had a chance.