Stinque
Home Latest Comments Log in
If it smells, we’re on it.
Stinque
Cassandra was right.
The 2009 Stinque Awards

Welcome to the 2009 Stinque Awards! 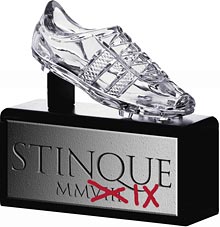 Fuck Neil Patrick Harris. Just fuck him. He promised he’d have this great song-and-dance number to open our show, and he’s nowhere to be found. Did he get the fucking memo? Does he know we’re starting at seven in the morning, and not seven at night? Does he know the Today producers just told us to fuck the satellite feed if we can’t get Harris on camera stat?

Well, um — oh, hi! Welcome to The 2009 Stinque Awards for Achievement in Infamy! We have a great show planned for you today, just as soon as — well, just as soon as you imagine it! Yes, we’re reviving the glory days of radio, so close your eyes, click your heels, and let’s get started!

First, as always, we bury the Technical Awards for Nice People as deep as we can, since they’re no fun at all:

Al Franken is mean. What he did with that anti-rape amendment was make it look like Republicans care about defense contractor profits more than women, and that’s a mean thing to do. Also, when Franken made Lieberman shut his pie hole recently by refusing to grant him a few more minutes to tell the American people how awful it would be for them to have health insurance, it was the first time in his 22 years of service that John McCain had witnessed someone besides himself doing so. That’s not good for comity.

wait a minute…patrick? the one who crashed his car into a barrier while eating a big mac asleep on ambien? i like him even more for that.

speaking of teh kennedy’s…it’s been quite a year in death. have you seen the death montages all weekend? when did bea arthur die? i love her!!!!
the liberal lion was just one of many many luminaries, famous and infamous.
thank god paul newman is still with us. (shhhhh…jamie is fragile now)

add to the list the good people of houston, 4th largest city in usamerica who voted in annise parker as their openly gay mayor.

and if the gawdamn edit button worked i wouldn’t be posting all these comments separately.

I’d give it to Franken because his amendment survived passage of the bill.

Ahh, thanks for using so many of my nominees, nojo!

My vote is for Oregon boy Kristof. With a close second to Franken.

i would also like to see an honorable mention go to bob allen.
how many guys want to pay you to suck your dick?
what a nice man.

@blogenfreude:
are you serious? i’m in a time warp, would have sworn it was a year ago.
but i agree, bob and gary are our standard bearers, lifetime achievement fo sure.