Stinque
Home Latest Comments Log in
If it smells, we’re on it.
Stinque
This is America.
Disaster Movies

The Death of Irony 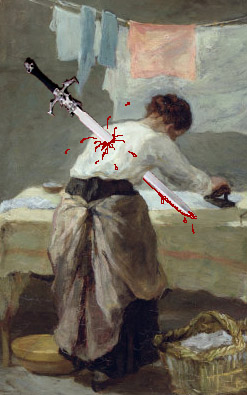 It’s one of those stories where you can read just the headline of the article then move on. Because, honestly, do you really need to delve into the body of a story that boasts the absurd (but true!) headline: NATO chief asks for Russian help in Afghanistan?

The NATO chief later said that he had asked Russian leaders to allow the alliance to fly cargoes — including possibly military ones — over Russian territory to Afghanistan and to provide more helicopters for the Afghan armed forces.

“I indicated that we would like to see a widening of the transit conditions,” he told the Ekho Moskvy radio station.

Foreign Minister Sergei Lavrov said that Medvedev would consider NATO’s requests, but gave no indication that Moscow was willing to increase cooperation and Rasmussen said he did not expect an immediate answer.

Students of history will recall that the Soviet war in Afghanistan lasted some nine years, led to the deaths of 15,000 Soviet soldiers, and is widely credited as one of the factors that led to the eventual dissolution of the Soviet Union and the subsequent collapse of the Warsaw Pact. Russian reticence to get more involved is understandable, then, and the nine year conflict that broke the Soviet Union’s spirit has often been referred to as the Soviet Vietnam. The only question now is whether Afghanistan will turn out to be our Vietnam… er wait, I mean… that didn’t come out quite right.

Throw in some Greeks led by a crazy eyed Alexander and Indians (of the Hindi variety), then you’ll have a super fast replay of Afghanistan History.

Linky link to a collection of documents and analysis on lessons learned from the Soviets’ experience in Afghanistan from the National Security Archives. Looking fwd to perusing it later.

Look at what you sick freaks caused to come up in my Amazon box.

I have to TJ, because 99% of the news lately is just so insane that my usual usual mirthful reaction to insanity has gotten worn down and I am starting to get alarmed. There was one genuinely funny story in the paper this morning. It said that an 18 year old woman who had been hit by a car while standing by the road was convicted of disorderly conduct in connection with the accident.

She had been standing by the side of the road, pulling up her top and flashing the cars going by, and apparently she distracted one driver so much that he hit her.

I myself once walked into a tree ogling a woman in a bikini.

@Prommie: What if she were a terrorist studying the utility of flashing tits for driving convoys of trucks into ditches? After 9/11 everything is different and sanity is evil!

@Prommie: I once walked off the end of a jetty because I was reading a book.

And, because I suffer from the delusion that I am the center of the universe and people care what I think, I will also say this: I hate that fucking “rum-pum-pum pum” fucking drummer boy song, I loathe it, absolutely loathe it. It fills me with shame and embarrassment when I hear it, because thats how I would feel if I were singing it, and I am empathizing with the singer. When I hear the line “the ox and lamb kept time, pa rum pum pum pum,” I want to die.

@Benedick is Danny Tanner: That is charming. I should clarify, I was the one ogling the bikini, it was not the tree that was ogling.

@Benedick is Danny Tanner:
At 13, I biked (yes biked) into a parked car as I was reading.

Yes kids, reading and biking is hazardous to one’s health.

@ManchuCandidate: Ha ha ha. I used to read walking to and from the station to get to school. And on bikes, of course. Never driving, strange to say.

@Prommie: I got that. Oh, and the jetty thing? My mother watched me do it just to see if I would.

@ManchuCandidate: @Benedick is Danny Tanner: I was once so distracted by a pair of breasts that I walked right into a marriage. (rimshot)

Wow. I think you kinda missed the point of that song, Prommie. Just sayin’. Why would he be humiliated? His gift was equal to the gifts of kings.

@Tommmcatt is hunkered down in the trenches: I just cannot stand the thought of, or hearing, a grown man or woman singing “rum pum pum pum.”

@Prommie: One of my favorite moments of the presidential campaign was the video that went around of Obama nearly walking into an enormous planter outside the Capitol because he was so engrossed in his BlackBerry. My heart swelled up with nerd pride upon seeing it.

Oh. It’s the verbiage. I thought you were empathizing with the kid in the song.

The other day I watched a guy fall into a wood-chipper while texting, it was hilarious.

@FlyingChainSaw: Now if the bus had been full of lawyers, that would have been funny.

You missed the lawyers?

. . . and with all that in mind, my newly healed calf muscle shall walk me over to the mall gun shop to pick up my new chronograph to be used to measure the velocity (and thereby the energy) of my handloads. I won’t read the BB or anything on the way over.

@redmanlaw: Good news on the moosell. How does the chronograph gizmo work?

Somewhat back to the original subject: Anything to do with anybody’s wars in Afghanistan reminds me of Kipling’s “The Young British Soldier”. The British Empire contended with Russia in The Great Game for almost a century in the region, throwing away soldiers for no particularly sane reasons. Here’s the conclusion of his poetic advice for Victoria’s men:

“When you’re wounded and left on Afghanistan’s plains,
And the women come out to cut up what remains,
Jest roll to your rifle and blow out your brains
An’ go to your Gawd like a soldier. “

I suspect this is just as relevant in the 21st Century.

@Dave H:
After all, Afghanistan is where Harry Flashman made his reputation.

@FlyingChainSaw: Well, if you don’t accidentally shoot it (and that has been known to happen), you fire a round through a pair of sensors that calculates and records the speed of the bullet. Once you know the speed of the bullet, and its weight (i.e. 158 gr), you can calculate the energy expended on the target at a given range.