Stinque
Home Latest Comments Log in
If it smells, we’re on it.
Stinque
Cassandra was right.
Brushes with Fame

Party Out of Bounds 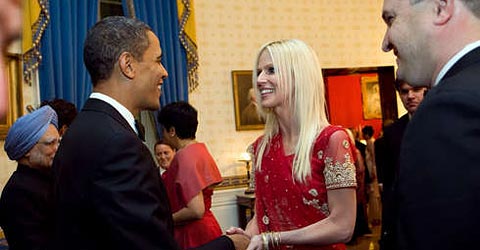 While some of us were admiring Michelle Obama’s dress Tuesday night at the State Dinner, and others were trying to raise a — how you say — stink about Republicans who weren’t invited (but who really were and just skipped the event), Sacha Baron Cohen a truly uninvited couple snuck past the guards:

The Secret Service is investigating how a fame-seeking couple crashed President Obama’s first state dinner Tuesday night, gliding in past security with no invitation and taking photos with Vice President Biden and others.

Michaele and Tareq Salahi [shown above], who are trying to get on the Bravo reality show “Real Housewives of Washington,” were not on the guest list to the official event, but somehow made it past a gauntlet of security checkpoints.

All’s well that ends well — no harm, no foul — but the Secret Service is sending some highly stained underwear to the cleaners:

The preliminary findings of our internal investigation have determined established protocols were not followed at an initial checkpoint, verifying that two individuals were on the guest list.

Although these individuals went through magnetometers and other levels of screening, they should have been prohibited from entering the event entirely. That failing is ours.

Notice all that technology mentioned in passing. And then shake your head in wonder that the flaw in the system is the inability to perform duties fundamental to any popular nightclub.

But hey, we’ve seen worse. It’s not like the President of the United States ignoring his morning memo.

So we spend our hundreds of trillion billion dollars every year so our FBICASS can protect our peznident and two dumb fucks just walk in. This makes me feel so good about the missile defense shield.

When can we admit that the most incompetent and wasteful govmint beaurocrasy is the SpyDefnseWarStuff.

Oh sweet FSM, it’s my solemn duty as your Washington State correspondent to report that everyone’s favorite ex-VP candidate, ex-Governor, ex-mental patient was in my neighborhood-ish yesterday and ran, err tried to run, whoops! quit halfway through running a charity 5K. That was the potatoes, now here comes the gravy:

She didn’t finish the race, opting to leave the course early to avoid more crowds at the end. About 40 minutes into the run, word started trickling out to people gathered at the finish line that she was gone.

After the race, Stacy Thompson proudly showed friends her picture taken with Palin in the middle of the run. Thompson’s mother went to school with Palin’s mother, she said.

“It was a really unforgettable moment. I think she’s a great American, and her values line up with my values,” said Thompson of West Richland, who wore a Rosie the Riveter pin with the words, “Women like Palin make America strong.”

“We don’t get people of her caliber here very often. She’s just a down-home person … and it’s a great place for her to be.”

It’s been said a million times, but you cannot make this shit up.

Her fellow airline passengers sure are gonna be pissed when she quits her next trip mid-flight. Fortunately she’ll only be able to do it once.

She would’ve ordered her children out of her uterus 5 months into the pregnancies if that worked better for her schedule.

Amaaaaazing. More evidence, she is enough of a narcissistic Diva to be a celebrity, but she will not be able to be a succesful politician, even the worst of them put in the hours, and the boredom, of doing politics, she won’t be able to do it. I am sure of it.

This gate-crasher story isn’t funny. It’s fucking scary. Given we have a ni-clonk– president that every fucking mouthbreathing truther wants to murder, not to mention a bunch of people pissed off about our country’s invasion of their country, this is horrifying. The whole reality television camera crew subplot is another indication of how far this country has sunk.

I hope that every single Secret Service guard who let the pushy blonde in loses their fucking job and their pension. These two should get charged with federal crimes. Same with the Bravo camera crew. And reality teevee should be banned.

/get off my lawn, kids

to explain – I was having a lovely time in Sonoma today wine tasting, despite not knowing that there were 20 wineries sponsoring some sort of pub crawl that had attracted every fucking moronic social climbing blond Marina chick and str8 asswipe white boy from Vallejo or Excremento…and then we rolled into one winery, one of my favorites, and there was a ginormous pickup truck parked in two spaces (naturally) with super large tires, a yellow flag ribbon, and not one, but TWO FUCKING BUMPERSTICKERS that said, “Where’s Barack HUSSEIN’s birth certificate”

I fucking lost it. Thank FSM that Mr. SFL was driving and I had no keys on me. I also never carry a purse, so I had no pen or marker to deface his truck. I was screaming so loud at this truck in the parking lot, we had to get in the Outback and go on to another winery. Where a dumb ass drunk total Housewive-of-Walnut-Creek chick walking to her limo shoved me into bushes as I walked by her, but that’s another story.

Moral of the story: Make sure to check if there’s a pub crawl at the wineries before setting off to pick up your winery club orders.

Now more than ever, I believe in the old saying, “Winners never quit and quitters never win.”

Can we talk about Tiger Woods and his “accident”?

Five bucks says the Swede broke the window with the golf club BEFORE he drove off at 2 am, given the track record of the National Enquirer in correctly predicting…ahem, John Edwards baby daddy situation…

@SanFranLefty: Of all the information in that comment, the thing I can’t get over is that you never carry a purse.

This does not compute.

@SanFranLefty: I figured it was while he was driving which would explain why he ran into a tree and a hydrant while leaving his driveway. The clubbing happening before or after doesn’t explain what led him to lose control of the Caddy.

@Jamie Sommers: I *NEVER* carry a purse. Only time I do is when I go to the gym and I need a place to stick my lock, water bottle, and iPod en route.

If I ever get to PHX you can see it for yourself. Ask the El Ay crew who met up with me last week, or the Chicago Stinquers from last month. I pack everything on my body. If I’m shot, mugged, or in a car accident, the EMTs will find my medical alert card, insurance card, and cell phone attached to my body. I think it’s also because I lived in DC for ten years pre-gentrification by the gheyz – so my M.O. then was to carry a totally empty purse and I had my wallet on my body. I got mugged twice in DC and handed over the empty purse but for the tube of blixstex, which the crackhead didn’t realize was empty until he got two blocks away.

ADD: Re Tiger – hmm. Good theory. I feel like we need to go recreate this with a camera crew from Deadspin.

@SanFranLefty: At the very least, we’ll need some pictures of his scene. There’s no way to know for sure unless we see the fairway driveway and water hazard hydrant in question.

@Original Andrew:
What kind of (alleged) marathoner with any pride quits in the middle of a 5K race?

I wonder what the non-seckest RUNNER’s WORLD would have to say about that.

In her defense, it’s highly unlikely she can do metric conversions in her empty head.

@SanFranLefty: Here in Orygun, Thanksgiving weekend at the wineries is like New Year’s Eve in restaurants–total amateur hour and tons of morans. Never, ever go wine tasting that weekend. It’s the winery version of Black Friday.

@Original Andrew: I can’t find the post (I think it’s one of Bloggie’s), but it ain’t the first time — Palin also cut short an NYC charity race last winter or spring. This was before the Iquitarod, so it hasn’t become part of the canon.

i never carry a purse either! mostly because i lose them.
phone, wallet, keys in the pockets. funny thing is, RB carries one. a kipling man purse, for any additional items i need to bring. a canvas shoulder bag he never leaves home without.
changing the world, one purse carrier at a time.

@nojo: Yes, I remember that, I thought of it right away when I was reading what @Original Andrew wrote.

@SanFranLefty: I agree, someone should lose their job. Say all you want about currency crimes or whatever – they have ONE FUCKING JOB and it’s to protect the president.

@Dodgerblue: Not mine, alas. But we do own the domain name. Really.

@baked: Most fabulous bitch I ever saw was this Italian diva in the Hermès store in Paris, who had this incredibly handsome young male assistant trailing along behind her carrying all her stuff. When her cell rang, he answered it and handed it to her. There was something extra-fabulous about her being in place primarily known for insanely expensive handbags. Her “purse” beat the holy hell out of any Birkin or Kelly in the place.

@nojo: Excellent. Capitalism at its finest.

If they didn’t have to squeeze their liquids into a quart-sized ziplock bag, then Barry was certainly doomed.

The current THREAT LEVEL IS ORANGE