Lou Dobbs loves him some Mexicans now (the good ones) 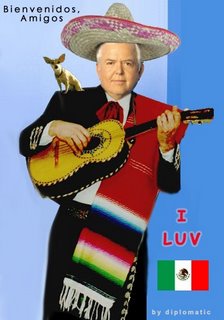 You’d be forgiven for thinking the END IS NIGH when you learned that Lou Dobbs doesn’t hate all Mexicans any more. In fact he loves them so much that the recently departed (from CNN) immigrant basher and birther conspiracy theorist has decided that rather than shipping all 12,000,000 of them back to Mexico, Dobbs now opines that, well heck, come to think of it: wouldn’t it just be a dandy ol’ thing to offer the good ones a path to legalization?

“Whatever you have thought of me in the past, I can tell you right now that I am one of your greatest friends and I mean for us to work together,” he said in a live interview with Telemundo’s Maria Celeste. “I hope that will begin with Maria and me and Telemundo and other media organizations and others in this national debate that we should turn into a solution rather than a continuing debate and factional contest.”

And what, pray tell, was the event that led the Dobbs bitter, shrivelled prune of a heart to grow three sizes in just a few days? It might be that he was recently visited by the Ghost of Thanksgiving Past, Present and Future (played by Cantinflas, George Lopez and Gael Garcia Bernal respectively) who showed him the error of his ways and led him to repent of his dishonest, fear-mongering ways.

As tempting as this scenario is, however, we suspect that other factors may be at play. Call us cynics, but it certainly does seem that it would be a difficult task for a budding politician who has recently announced his intention to run for U.S. Senator from New Jersey to win in a state that, boasts nearly a million and a half Hispanics, comprising 16% of its population, a figure that places the Garden State 9th in the United States in terms of hispanics as a proportion of the general population.

We realize our theory about Dobbs motives is a cynical one. We only wonder whether it is more cynical than building a huge televsision following by demonizing one of the most vulnerable, exploited, and fearful populations in this country.

After reading this, I’m picturing Lou as the Wolf in the “Wolf and Sheepdog” Warner Bros Cartoons dressed as the Sheepdog.

I’d like to take this moment to announce my coy denial of rumors that I plan to run for President, which should make anything I sell say profoundly relevant, because I might change my mind.

Maybe he is just trying to get a job at Telemundo.