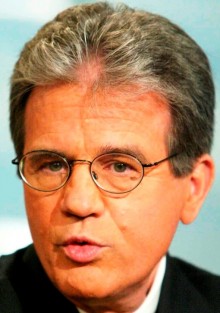 Because Republicans always support the troops:

Sen. Tom Coburn is taking political heat this week for blocking a vote on a bill that would significantly expand access to health care for American veterans, despite broad bipartisan support for the measure.

The bill is designed to address the health needs of at least some of the roughly 1.5 million US veterans who are not currently covered by the military’s health system. It would also provide assistance to veterans’ caregivers.

Coburn argues he cannot allow the bill to proceed because it doesn’t address how its $3.7-billion tab will be paid for. The Oklahoma senator is known as a fierce fiscal conservative, but critics of his move to block the veterans’ bill say he is acting hypocritically, because he has in the past voted in favor of emergency war spending bills that had much larger tabs than the vets’ bill.

Generally, I think war is pretty fucking stupid, but punishing the people who are ordered to wage it?  No.  Never. And fuck Oklahoma for sending idiots like Coburn to Washington.

Steve in Manhattan
5:00 pm • Thursday • November 12, 2009
comment »
Choose Your Delusion
The Yellow Whore of Texas As Long as Babies are Murdered by the Free Market, It’s Okay
10 Comments
ManchuCandidate

So much for supporting the troops…

RW outrage in 5… ah forget it.

People like him make me think of the poem “Harry Wilmans” from “The Spoon River Anthology”:

Harry Wilmans
I was just turned twenty-one,
And Henry Phipps, the Sunday-school superintendent,
Made a speech in Bindle’s Opera House.
“The honor of the flag must be upheld,” he said,
“Whether it be assailed by a barbarous tribe of Tagalogs
Or the greatest power in Europe.”
And we cheered and cheered the speech and the flag he waved
As he spoke.
And I went to the war in spite of my father,
And followed the flag till I saw it raised
By our camp in a rice field near Manila,
And all of us cheered and cheered it.
But there were flies and poisonous things;
And there was the deadly water,
And the cruel heat,
And the sickening, putrid food;
And the smell of the trench just back of the tents
Where the soldiers went to empty themselves;
And there were the whores who followed us, full of syphilis;
And beastly acts between ourselves or alone,
With bullying, hatred, degradation among us,
And days of loathing and nights of fear
To the hour of the charge through the steaming swamp,
Following the flag,
Till I fell with a scream, shot through the guts.
Now there’s a flag over me in Spoon River!
A flag! A flag!

I used to do that as a monologue for auditions as a young man.

Don’t get me started with the poetry though….

Isn’t this the guy that cuts up cats in his basement?

Coburn’s other antics have already assured him a place in hell, if the great Flying Spaghetti Monster in the sky is abiding by the philosophy espoused by the long-haired radical socialist Jew and my friends flippin and TommCatt.

Although I suspect Coburn though.

Disco Inferno is playing as I type…

I think you guys keep mistyping “exploiting” as “supporting.” Get on that, will ya?

does this mean no half priced fries at burger king?