Stinque
Home Latest Comments Log in
If it smells, we’re on it.
Stinque
Assholes, they do vex us.
Comic Relief 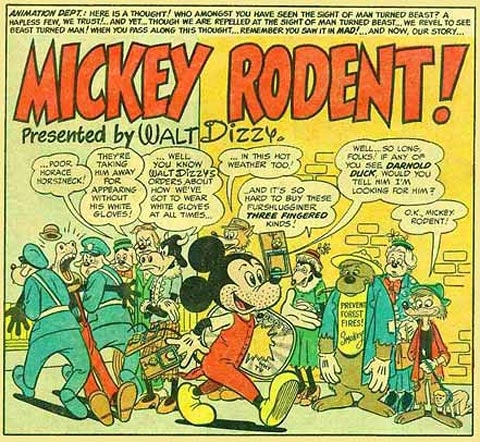 Among the lighter news we’ve been distracted from the past couple of days is a report that Disney is roughing up Mickey Mouse for a new generation:

The first glimmer of this will be the introduction next year of a new video game, Epic Mickey, in which the formerly squeaky clean character can be cantankerous and cunning, as well as heroic, as he traverses a forbidding wasteland.

And at the same time, in a parallel but separate effort, Disney has quietly embarked on an even larger project to rethink the character’s personality, from the way Mickey walks and talks to the way he appears on the Disney Channel and how children interact with him on the Web — even what his house looks like at Disney World.

“Holy cow, the opportunity to mess with one of the most recognizable icons on Planet Earth,” said Warren Spector, the creative director of Junction Point, a Disney-owned game developer that spearheaded Epic Mickey.

But Mad’s Will Elder — better known for Little Annie Fanny — beat Disney to the punch 54 years ago.

Well, it’s good to know we get *something* for turning limited copyright into an eternal corporate privilege.

Also, I think South Park covered this already – although I might buy a game where I get to pimp-slap the Jonas Brothers as The Mouse.

They’ve been trying to re-invent Mickey for a while now…there’s even a contest over at Feature for the best “non-icon” Mickey…they feel he’s lost his character. I have to admit, in the product I work on (Mickey Mouse Clubhouse) he looks very stiff and unnatural- but hey, that’s what you get when you do CG on the cheap.

In related news, they just released the new Goofy “how-to” short as bonus on National Treasure II. I think you have to admit it really captures the old aesthetic, and is pretty funny to boot. Lassiter is really bringing back Feature Animation with stuff like this.

Let me know if they schedule a cage match between Mickey and Daffy Duck. Otherwise, I’m not interested.

@blogenfreude: My money’s on Daffy.

@Tommmcatt is hunkered down in the trenches: El Raton en “Steamboat Willie” and “Touchdown Mickey ” rules in my book.

@SanFranLefty: It’s an honor just to be nominated. You made my day.

I’d feel better if Mickey were cast as an arsonist and wife beater with a crystal meth habit.

Because he actually had a personality. Today, he’s just a bland spokesmouse.